This build is not currently updated for Scourge league. We will attempt to play it once the league is live and, if still viable, update this guide.

Hierophants are definitely not just for totems and brands! In this build we combine the accessibility of a MoM/Archmage build with the powerful and popular skill combination, Bladefall and Blade Blast. What results is a build that’s fantastic for new players and veterans alike. It scales both defenses and damage with the same major modifier: Mana. Therefore, picking out upgrades or crafting is intuitive from the leveling process to the end game. If you’re a up for a fair bit of crafting instead of using a few of the recommended uniques, it’s approachable in SSF, in addition to being a viable league starter for Softcore and Hardcore alike. During Ritual league, I took this build to level 100, and spent about 70% of the XP from 99 to 100 farming Simulacrums to demonstrate how tanky the build is.

A friendly reminder that this is a two skill build. If you haven’t played one before, make sure you split up the skills so you use different hands. If your BF and BB are on the same hand you run a considerable risk of a Repetitive Stress Injury. I use Bladefall on right mouse button and Blade Blast on Space Bar to split the skills across my hands.

This video will provide an adequate overview so you can make an informed decision if this is the right build for you. Note that this was published last league and on week 1 gear, but everything here is still accurate. I’ll be making another video showing its actual end-game damage soon.

While these do not cover every advantage and disadvantage of this build, I believe these are the important points of consideration, especially when playing for league start and not for curiosity.

+ Bosser – Has cleared all boss content including The Maven, All Invitations (The Feared Deathless btw), Uber Elder, Uber Atziri, Shaper, Elder, All the Guardians and even went down into Delve and stomped some bosses.
+ Defensive – In the endgame your damage has to jump through a plethora of defensive layers to actually reach you. You’ll have Fortify, Glancing Blows, Mind Over Matter with 60% of incoming damage taken from mana. The build has absolutely crazy amounts of recovery and regen, with leech, endurance charges and ailment immunity. Oh, and don’t forget 6000-7000+ Arcane Cloak on top of that. The build is also capable of working in Divine Flesh as well!
+ Fun Mapping – From the moment you hit maps til you’re farming the end-game, Bladefall and Blade Blast is a seriously gratifying combination to play.

– Requires Workarounds – You’re susceptible to a few map mods such as phys and spell reflect, but everything can be worked around. Sybil’s + Reflect Pantheon takes care of Elemental Reflect and for Phys reflect, you swap your Blade Blast for a Lvl. 1 gem.

The BF/BB Hiero is a build that is a jack of all trades: it can do everything reasonably well and excels in most things.

The build doesn’t come online until Act 4 with the acquisition of Unleash support from the reward vendor. Until then you run Stormblast Mine and Orb of Storms. There will be a detailed leveling section, don’t worry!

Once the build is online, you’ll weave between packs, blanketing enemies in blades and causing devastating explosions. While there is no “explode effect” such as from Profane Bloom or Herald of Ice, the impressive amount of AoE you have as a Hierophant is still capable of clearing out entire screens of enemies in a single cascade and blast.

Bladefall and Bladeblast are merely vectors for delivering the massive amounts of flat lightning damage we gain from Archmage, Arcane Cloak and Sigil of Power. We don’t even convert as it is less than 4% of our damage at gem level 20 and moderate gear. While your acquire upgrades through the end game, you’ll get tougher and more powerful with every bit of mana you accumulate.

For bosses, the playstyle can be as rewarding as lining up buffs and flasks just right to cause massive damage, or as brain dead as face tanking Shaper slams. Its up to you! You can do either/or, or both!

The fundamental defensive mechanic for this build takes the form of ‘#% of Damage is taken from Mana before Life’ modifier, which we find on the Mind Over Matter keystone, Hierophant’s Divine Guidance, Cloak of Defiance and Watcher’s Eye. This redirects 60% of incoming damage to mana, effectively multiplying our life pool by 2.5, from around 5,000 in the endgame to 12,500 hit points.

Very high mana pool and mana recovery allow us to utilize two other related mechanics. For one, thanks to The Agnostic, we recover 20% of mana per second any time we’re not on full life. This can mean about 2000 life regenerated per second. Then, Arcane Cloak provides a similar buff to Steelskin, granting us additional hit points in a varying amount depending on our current mana – even up to ~3.5 times as much as the latter at level 20, i.e. around 7,500.

The character can afford to accumulate a respectable chance to block attack and spell damage. Glancing Blows elevates them both to over 65%, smoothing out the pattern of damage taken, but increasing its net value. We counter this downside by using a shield which recovers #% of life and #% of mana each time we block.

Additionally, due to Conviction of Power, we constantly have at least 4 Endurance Charges, which provide additional 16% physical damage reduction. Occasionally, especially in static encounters, we can utilize Sigil of Power, which reduces enemies’ damage by 20% in its area at maximum stages. Last but not least, the character can relatively easily incorporate the Fortify buff through Shield Charge or Vigilant Strike while using the Vigil. This further (multiplicatively) lessens any hit damage we take by 20%.

All in all, Shaper’s Slam shouldn’t pose a threat for our exile. If you’re wanting to be even tougher, then scaling things like Fortify Effect or Phys Taken as Lightning, or accommodating Divine Flesh would be the way to go.

In Ultimatum league, this build shines. It combines very powerful defense with very consistent offense. This build is already quite fantastic at farming Simulacrum encounters, which is very similar to this currently league mechanic as it also had waves of enemies and increasing difficulty. The changes to Blade Blade and other skills in the Ultimatum patch notes aren’t worth hesitating over. The build is still capable of 10+ million DPS against bosses with reasonable investment.

This is the PoB for the end-game version of build with . There’s plenty of room to grow from here, however, should you love the build enough to further advance it.

To get a quick cursory glace at the passive three, here’s a planner link for the Archmage BF/BB Hierophant . Note that PoE Planner does not support the use of Cluster Jewel Setups, such as

Small Cluster Jewel, so this is the tree without those, sadly. 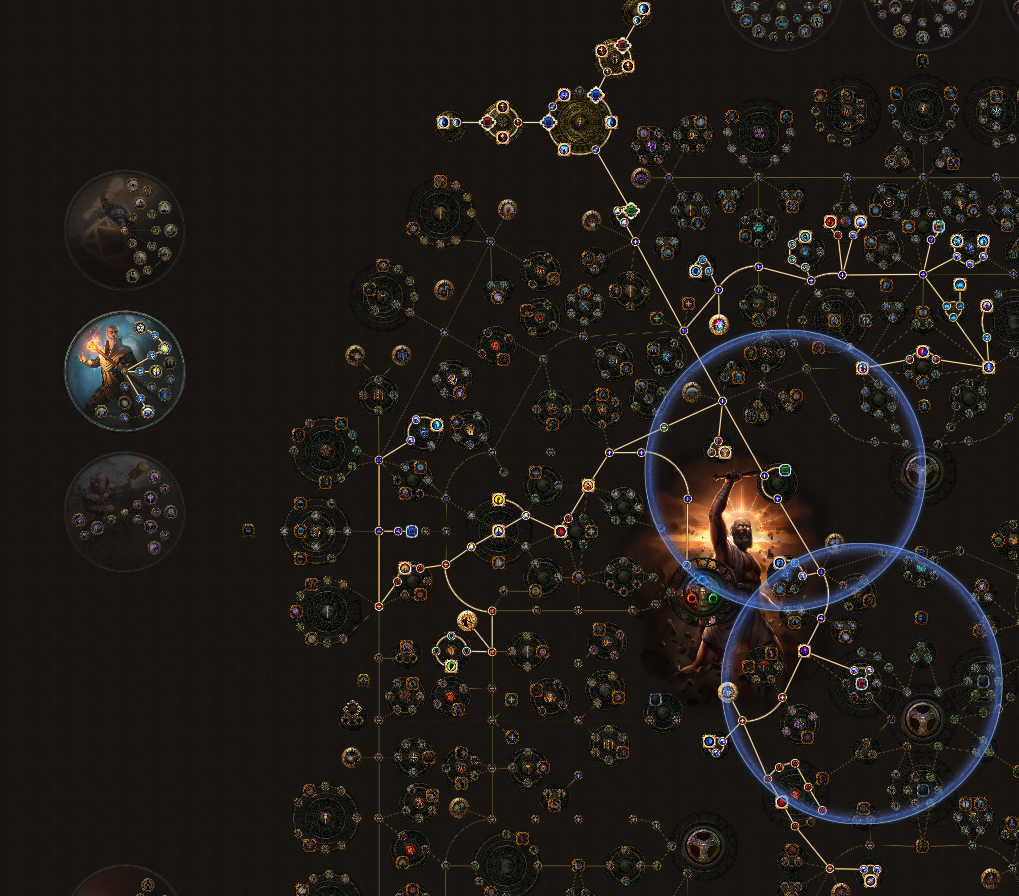 This build has detailed leveling advice, which you can find here.

Combine this with the leveling trees in the PoB & Gems section and you’ll be in maps in no time!

There are many flavors of BF/BB builds out there, which truly demonstrates one of the best things about Path of Exile. Comparatively, yes, there will be BF/BB builds out there that do more damage or mitigate more damage taken. It is true of any skill that achieves a fair bit of diversity among ascendancies. That being said, the Hiero’s appeal is the relative simplicity. The stats are easy to scale and understand. The crafting is non-specific, meaning you can use whichever methods you’re comfortable with, or materials you have on hand to create your gear. There’s alternatives to everything if you’re in an SSF environment, and you’re not reliant on a certain weapon drop or other such things.

Why are you using Glancing Blows, wasn’t that nerfed?

GB is still an option for builds with very high recovery, which we have lots off. Yes, you will technically take more damage overall, but most of the damage is completely buffed out our recovey. Lets take a 1,000 damage hit and ignore resistances for a moment. That damage passes through Fortify’s 20% at 800 before we block at 65% damage taken leaving 520. That gets split by Mind Over Matter leaving 208 damage actually reaching you. With 5% Life gained on block, you recover at least 200 life, closer to 250 in end game. At 10,000 damage, Fortify takes it to 8000, and blocking it reduces it down to 5,200. That then gets split by MoM leaving 2080 damage that reaches the life pool. the 250 recovery does not help nearly as much in this case, but Agnostic kicks in, recovering about 2000 life a second, with about 1k life leech going at the same time. You can take a 10k hit and barely blink an eye, things like Shaper Slams barely tickle!

How do I get around the Wand Trigger craft nerf?

If you’re no longer wishing to use WoC, you can get exposure from a notable on a Large Lightning Damage cluster jewel, and place a different spell in your mainhand, such as Tempest Shield.

What do I use instead of, or until I get my Cloak of Defiance or Atziri’s Foible?

Alternatives to everything will be listed in the crafting section for those league starting this or playing SSF.

I haven’t been much of a “spell person” but I’ve always liked the MoM/Agnostic playstyle, and BF/BB is extremely satisfying to play. I’m really proud of how this build came together and how tough it ended up being. It was the first time that getting to 100 did not feel like a total grind. The more powerful he got, the more I wanted to play him and nothing else. It’s my hope that you’ll enjoy the build just as much, and stomp the end game just like I did. Enjoy!