This build has received a number of minor nerfs going into patch 3.14, Ultimatum league. None of them are substantial enough to be a problem, however, and they do not fundamentally change the character. The nerf to Essence Glutton does cut mana regen a bit, but Essence Glutton is still our best choice, so it doesn’t change ascendancy picks or order. The nerf to the “trigger a socketed spell on skill use” craft does change our gem links somewhat, as you’ll now want to run

Bone Offering in your weapon to ensure that

Bone Offering has 100% uptime even when targeting only a single corpse. This is less necessary on a Softcore version of the build, as it will only be relevant about 10% of the time, but is worth doing in Hardcore for the consistency. Likely, you will need to cast

Wave of Conviction or

Blade Blast manually if you choose to do this, but it’s a worthwhile annoyance for the defensive consistency.

Cremation is an intensely powerful single-target skill that shreds through bosses on a budget and has such potent damage potential that it allows the user to invest quite a bit into survivability while still outputting good bossing damage. It also has the benefit of being a skill with quite a bit of lingering damage, since the bulk of the damage it does comes from the projectiles which fly out from the geyser for the 8 seconds (minimum) after you cast it. This behavior lends it very well to the usage of

Archmage Support, which provides massive amounts of lightning damage at the cost of incredibly high Mana cost – something which you don’t mind as much when you don’t have to recast often because of Cremation’s persistent damage.

For those of you unfamiliar with the skill itself,

Cremation targets a corpse, causing that corpse to explode and deal Fire Damage in an area around it. Molten projectiles then spew out of the ground where that corpse was, flying outward in an area around the source in a spread that is determined in part by your Area of Effect scaling. Those projectiles explode when they land, doing damage to everything around them – importantly, each projectile from one geyser can individually damage the same enemy, meaning that the geyser provides a continual source of high damage on anything near it. Crucially as well, reducing your area of effect will cause the projectile spread to tighten, meaning that you can get even more significant overlap on a single target, which is where quite a lot of our ability to do massive single-target damage comes from. A cap of three geysers at once prevents you from infinitely stacking projectiles on the same boss, but three is more than enough – and if it isn’t there’s a Helmet enchant for a fourth!

Map Mods to be Avoided

This character can run the majority of map mods, with the only truly impossible mods being Players cannot regenerate life or mana and Monsters reflect Elemental Damage. As always though, be cautious when running maps with too many damage mods compounding, as this can be quite dangerous, with things like Reduced Block, -Maximum Resistances and Extra Projectiles being some of the most dangerous.

For clear, this build does lack a bit comparatively to other corpse-oriented skills such as

Detonate Dead, as there is the delay in damage from placing your corpse, exploding it, and then having projectiles land. That said, with enough movement, attack, and cast speed you can get this feeling extremely smooth, and the upside is that you ought never to be lacking in damage or survivability.

This build is certainly oriented towards a more Hardcore playstyle, however, as it does sacrifice mobility in a couple places for tankiness. The actual moment-to-moment gameplay consists of throwing a

Spell Cascade Support for quality of life) ahead of you, popping one of the corpses, and zooming to the next pack while

Cremation deals with whichever unfortunate souls happened to be near your geyser. Popping

Arcane Cloak manually for tougher enemies and more dangerous packs of monsters is my preference, but it can also be automated by tossing it onto your left mouse button. For really tough enemies, stopping to cast your Curse or using the new Sigil of Power skill to get a further damage boost ought to handle them quickly.

For bosses, the playstyle gets a little different. Any boss that gives you time to set up your damage is in extra trouble, as that means you can swap in

Intensify Support stacks in order to land as many projectile hits onto them as possible – something which got buffed in the Heist league patch with the changes to Intensify meaning that the AoE gets pulled in even tighter if you get the node on the tree which grants an additional Intensify stack.

Cremation will maintain the tighter projectile spread and damage bonuses from

Intensify Support stacks even if you move, however recasting your geysers will result in replacing the oldest one with a new geyser without the damage benefits. The main value of this trick lies against bosses like Conquerors that give you the free time to set up and burst them for a few moments at the start of a fight, often cutting them down to half or less health before the fight properly begins (if not outright killing them on min-maxed versions of the build).

The passive trees are all contained within this Path of Building link .

In case you are unfamiliar, I’ve provided a visual tutorial below that will show you how to swap between passive trees in Path of Building. The Path of Building provided has leveling trees for various stages of leveling, but not separate HC and SC trees – this is because I don’t have anything I would cut for more DPS in SC, and the build is perfectly HC viable. The gear in the Path of Building highlights the most important stats you’ll need in each slot, and does not accurately reflect resistance and stat needs you may have – be sure to cap your res and meet your stat requirements! 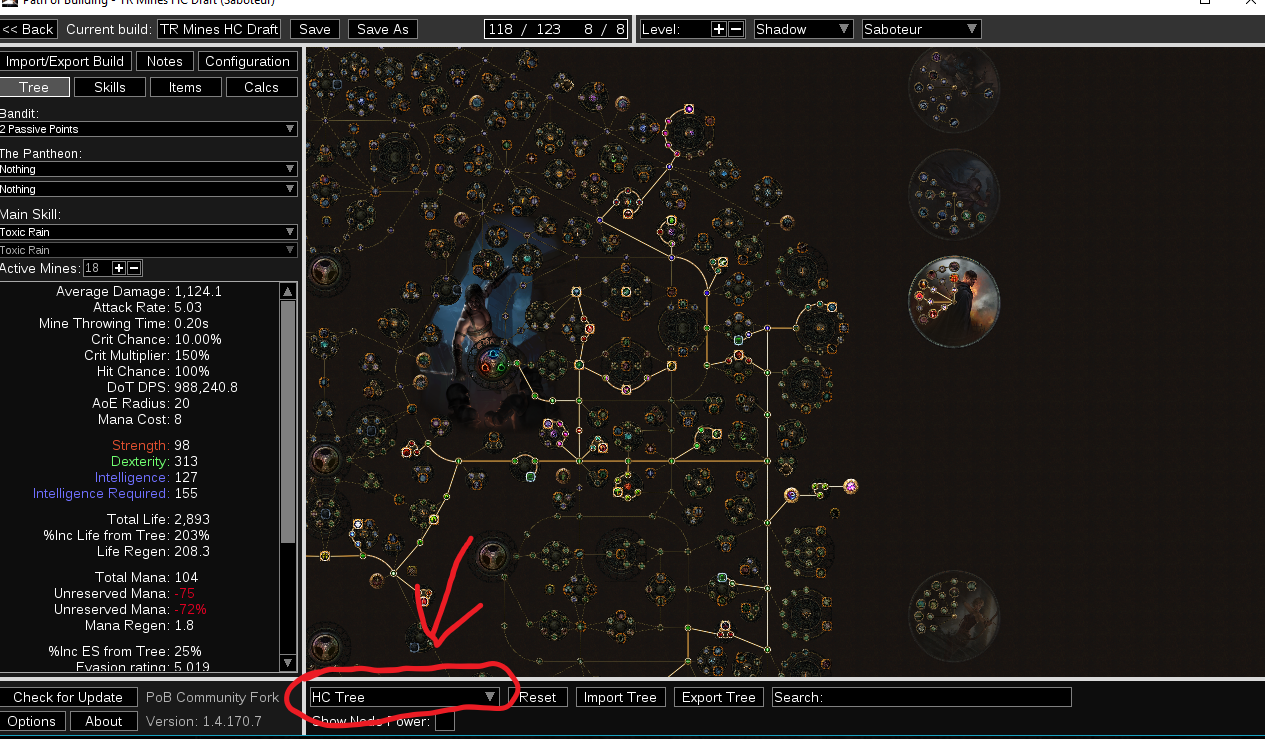 If you’d prefer to use the PoePlanner to access the passive tree, the endgame version is available here. Please note that PoePlanner does not support the use of

Thread of Hope. There is meant to be one in the jewel socket immediately to the left of Templar, a large radius ring which allows us to pick up Spiritual Aid, Righteous Decree, Sanctuary, and Discipline and Training, as shown in the screenshot. 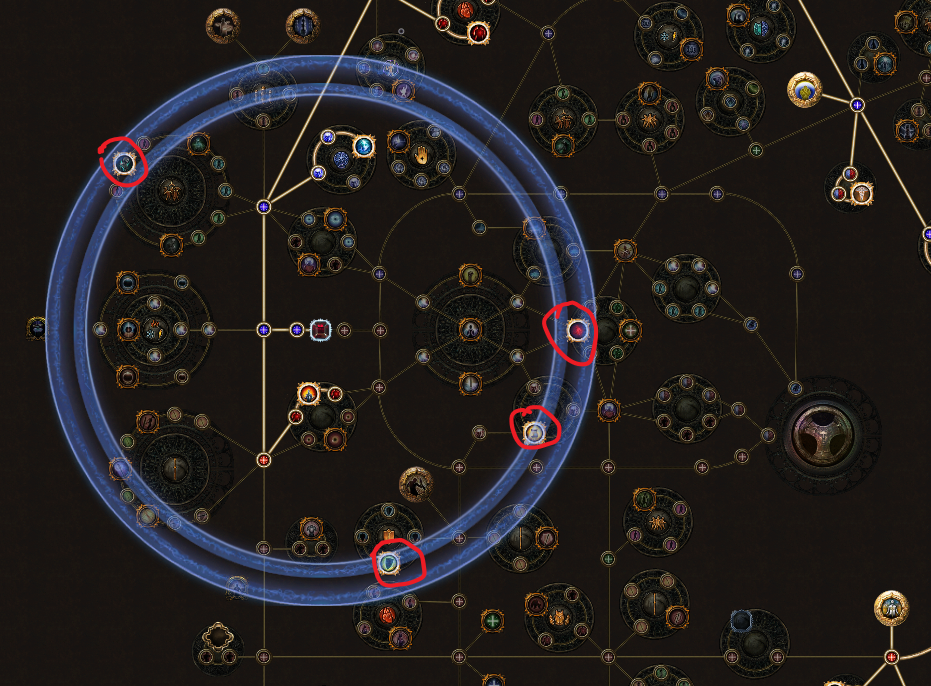 Leveling trees are listed below in the Leveling section.

Find out more about the passive skill tree, as well as all the recommended Gem Links on our dedicated page.

Ascendancy, Bandit, and Pantheon Power choices are all provided on the specific page.

This build’s itemization is covered in depth on the gear page. If you just want a quick cheat sheet to look over, I’d suggest looking through these graphics which has references for low budget, big budget, and massive budget versions of gear in each item slot. For full information on each one, be sure to check out the gear page.

Sadly, you won’t be able to use

Frost Bomb to get through the very early portion of Act 1, and swapping over to

Orb of Storms to progress through Act 2 and the first half of Act 3. Using a

Holy Flame Totem in a one-link can help with bossing, since the Consecrated Ground it generates will provide a small buff while fighting early bosses. Be sure to throw your

Stormblast Mine while standing inside of your Orb of Storms in order to maximize the damage from it.

For your mines link, you will want:

Orb of Storms, you will want:

When you get to Act 2 and complete the Baleful Gem quest, you’ll want to pick up

Rush Elemental Overload as soon as possible after picking up the Life just above Witch and a couple points into Lightning Walker.

I would suggest crafting a couple of Wands with the flat damage recipe at level 20.

If you’re unfamiliar with how to do this, vendor a Magic Wand with a Rare

Topaz Ring and an a

Orb of Alteration. The kind of ring you use determines the kind of damage you get, I would suggest using a

Ruby Ring so you get Fire Damage to spells. Save a couple essences or Alchemy Orbs you get so you can do this recipe, as it will provide quite a bit of early damage.

Cremation setup, and the gem link progression that you’ll want for when you swap is detailed on our skill gem page. You won’t be swapping out of your Heralds and into

Archmage Support until Cruel Lab at the earliest, however. I’d suggest focusing on some of the cast speed nodes on the tree as you’re making the swap over to Cremation , as it plays a large role in making the skill feel smooth to play.

Focus on getting Life and Mana rolls on gear wherever possible, prioritize Movement Speed on your boots (if you can get a

Wanderlust, all the better) and try your best to cap your Elemental Resistances, particularly as you reach past Act 5. Keep an eye out for Dexterity rolls on gear as well, and get your hands on a

Jade Amulet early on to help prevent Dexterity issues. If you have the regeneration to handle it, a

Blood Rage can be really useful as you get into the later acts to give you a bit of extra oomph while clearing.

Archmage Support, as this is where you’re most likely to find a good Mana roll early on to supplement your damage. Pick up Mind over Matter after Cruel Labyrinth as well.

When you reach The Blood Aqueducts, you’re likely going to want to pause your progression and farm here for

Humility cards. Archmage builds are extremely reliant on a six-link to scale damage into the endgame, to the point where I would much rather have a

Tabula Rasa over a 5-link even in a HC setting, so I think it’s worth it to farm one here. If you choose not to, you could potentially complete Residence as your only T2 map and try to farm a 6-link there through

The Dapper Prodigy, but if luck treats you badly you might get a Body Armour base that will not easily roll the correct colors.

Other useful tools for scaling boss damage while leveling include

If you have any further questions about leveling, I’m happy to answer them!

Cremation is a little bit of a late bloomer, so don’t be too worried if the leveling process feels a little slow in the middle acts. Feel free to stop by and ask me any questions on my stream, or just leave a question down in the comments below!

Hi! I'm Octavian, I've been playing Path of Exile since Warbands league (back in 2015) with more than 12,000 hours logged so far and I've jumped around to pretty much every game-mode the game offers. SC trade, HC trade and Solo Self-found both SC and HC - I generally try to make builds that have well-rounded options for approaching the game from any of these angles, but my preference for tankier, higher single-target builds does shine through in what I make. If you like this guide or have any questions related to it, be sure to check out my stream where I'm live almost every day. Enjoy the guide!