The Gladiator ascendancy from the Duelist class is one of the best choices when you choose to build a bleed-oriented character. For this particular character we choose to wield One-Handed Axes, as they currently represent the strongest damage over time scaling options, for attack-focused builds.

If you follow along with this guide, it should be fairly easy to roughly mirror my setups, as I am currently league-starting this particular build during Ultimatum League, making every item I list in this build a “realistic” option to acquire for you during a league start as well.

THIS IS A WORK IN PROGRESS BUILD GUIDE, THAT WILL BE UPDATED FREQUENTLY. PLEASE FEEL FREE TO ASK QUESTIONS, BUT ALSO CONSIDER THAT THIS IS NOT A FULLY FINISHED BUILD.

The build does not require any build-enabling items, as I am setting it up as a league starter. We will be making use of the newly buffed

Bladestorm and its “More bleed damage” multiplier, coupled with a 4/5-link

There are, however, a lot of Cluster Jewels that can VASTLY increase our damage, as well as my always beloved “Divine Flesh” keystone, granted by the Timeless Xibaqua Jewel.

For the Cluster Jewels, you’re mostly looking for the following Noteables (you should always aim for 3 noteables on large clusters, 2 for medium clusters and 1 for small clusters):

For the gear pieces, we are looking for Armour bases with as much Life as possible.

Having Rings and an Amulet with decently-rolled flat Physical amount added to attacks is likely going to be ideal. Put extra emphasis towards anything featuring “Physical Damage over Time Multiplier”, as this will also scale our

Our optimal weaponry setup will be a Main-Hand One-Handed Axe with as much Physical DPS as possible. Aim for a roughly 400pDPS Axe for the T14+ stages of your mapping. Before that, you can opt into a 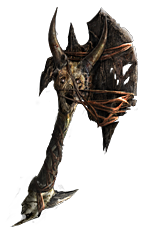 Jack, the Axe, as it is roughly equivalent to a 380pDPS Axe, thanks to the many bonuses it provides.

+ Easy to follow along with a high ceiling
+ Amazing scalability due to being a league starter
+ Great survivability, thanks to Armour base + Maxed out Block + life-gain-on-block shield and Gladiator bleed pops.
+ Playing a pure Physical build means you don’t care about “Elemental Reflect” mods
+ EXTREMELY fun playstyle, thanks to Gladiator bleed pops and awesome looking Bladestorm MTX!

– Potentially awkward scaling, due to pure Physical focus
– Potentially expensive to max out entirely, due to specific Cluster Jewels being required for optimal DPS
– Slow ramp for damage, as it requires a couple of seconds uptime to really get going with all the bleed and corrupted blood stacks

The build cannot do Physical Reflect.

Other mods that should be avoided but CAN be finished (with some hardships): Cannot Leech, No Regeneration, reduced block chance and increased enemy physical resistances.

Mobility-wise, you will want to use

Leap Slam and potentially (based on personal preference)

Smoke Mine to get around the maps; both abilities allow you to cross chasms and other environmental objects, allowing for a very fast traversal. If you DO opt into the Smoke Mine, make sure pick up a “Divergent” alternative quality version of it, as it will also permanently give you a free 10% attack speed bonus!

Offensively, you will want to keep up your

Corrupting Fever 4-link every 6 seconds or so, to keep up the buff. Additionally, you will be able to place down an

Ancestral Protector in order to vastly improve your attack speed against tough monsters or bosses, as it applies its attack speed increase to any friendly targets nearby.

Defensively, you will have to keep up your

Leap Slam in order to permanently reduce incoming damage by a considerable amount.

We will also be making use of a couple of defensive flasks, such as a

Vaal Molten Shell is a great Guard skill choice for the build, as we will naturally be accruing a lot armour and it does incredibly well with the previously-mentioned defensive flasks.

For playstyle, you will first want to

Leap Slam into a pack of enemies, to:

It is better to use more Leap Slamming on enemies rather than too little, as it is IMPERATIVE to have the Fortify buff up AT ALL TIMES.

This is our best-case-scenario POB.

This is my current Ultimatum League character.

Before you acquire the necessary Cluster Jewels, you can opt into something like this PoB.

Focus on moving towards “Call to Arms” and “Resolute Technique” as early as possible, while picking up the nearby minor nodes. Aim to acquire “Resolute Technique” at around level 30~ or so, it is a HUGE damage upgrade for the build. Once you got “Call to Arms”, make sure to get yourself an “Enduring Cry” from Act 3 and put it on your Left Click, to use as a movement button. It will trigger on CD, keeping you healthy over your playtime.

Focus on getting all the attack-speed, Dexterity and Intelligence upgrades first, and then moving on towards the other nodes that haven’t been picked up yet. Leave the Scion Life-wheel for a later time and focus on the rest of the tree first.

If you are a new player (or if this is your first character for the league, just as it is mine), then note that obtaining these items will be very difficult, if not impossible. They are rare drops, which you can otherwise only acquire if you have saved up currency, so do not focus on them too much, and instead simply look for items that match the affix priorities listed in the gearing section above.

You should be able to simply use

Splitting Steel from the very beginning, as we get it immediately on our arrival in Lioneye’s Watch as a Duelist. Make sure to choose it as the reward! Try to focus on any sources of “flat added damage” of any kind for your support gems.

Chance to Bleed Support is likely going to be one of our favorites for this matter.

Once you reach level 28, switch on over to

Bladestorm for the remainder of the game. Before that, use the following set-ups for early leveling:

How to Deal with Mana Problems? The Skill Tree Does Not have a Single Node of Mana Leech.

Having a single jewel with “% of Physical Attack Damage Leeched as Mana” will solve all your Mana problems, so try to get one as soon as possible. It should be extremely easy to acquire, even on your first character for the league, by simply hitting a “Viridian” jewel with a few

Orb of Alterations or

Alternatively you can also just buy a jewel like this for peanuts on the trade websites, they’re extremely common.

During single-target fights (usually bosses), make sure to apply your

Poacher's Mark in order to sustain your Mana, as the leech provided by the jewel will not be enough to sustain you. This, of course, does not apply later on, when you switch your Mark to

This is a character to deal with all the content in the game and offer a great amount of scalability for the players that don’t want to start over with a new character every 2 or 3 days.

Corrupting Fever mechanic while maintaining very respectable survivability throughout the leveling process up to and including the endgame.