This guide will teach you how to craft the notorious +2 level of Spectre boots in the game.

The finished item that you should have at the end of this crafting process is a pair of high Life or Energy Shield (depending on your preference and choice of base) boots with the “+2 level of All Raise Spectre Gems” modifier, high Movement Speed, and Elemental Resistances.

You can check the full crafting process below, or skip straight to the TL;DR summary. 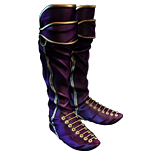 Sorcerer Boots, while for the Life-based version you can use any base you want, but we recommend a pair of Two-Toned Boots.

The item level you’ll want to go for is a minimum of 86; this means that all modifiers available on the boots can roll, but most importantly we can get up to 35% Movement Speed!

Do keep in mind that the item must be Elder-influenced.

If you are going for high Energy Shield you would want to prepare the base by first making sure the item has 29-30% Quality. This is done with 1-socket Resonators with the

Perfect Fossil, which will re-roll the item as well as change the quality on the boots from 1-30%. Once you are satisfied with the Quality, we can move on to the actual crafting process.

The first step is basically hunting down the actual “+1 level of All Raise Spectre Gems” modifier, which is done by spamming

Bound Fossil with 1-socket Resonators until the boots have the modifier. Since this is a suffix modifier, we don’t care about the current state of the prefixes, which includes not caring about any movement speed modifiers, as we will attend to that in the later stages of this crafting process.

Once we have the Spectre mod, it is important to verify that the remaining suffixes are desirable modifiers, such as mods that you can alter, improve, straight up remove, or keep for what you want on the finished product. If the suffixes are not desirable, I would recommend continuing to spam the Bound Fossils or use an

Now that you have the modifier and you’re happy with the remaining suffixes, you’re going to want a second influenced modifier if there isn’t one already. The easiest way to do this is to simply utilize the Harvest craft “Augment a Rare Item with a New Influence Modifier”. Granted, this craft can be a bit expensive, but if look at https://poedb.tw/us/mod.php?cn=Boots&tags=int_armour we see that if we make sure all 3 suffix slots are taken (which is what we would need for the final step either way) we can simply use the Harvest craft “Augment a Rare Item with a New Lightning Modifier”, which will guarantee the the Influence modifier “Unaffected by Shocked Ground” (same thing with “Augment Chaos” craft for Desecrated Ground, but it’s normally a bit more expensive).

If we’ve done that, the current state of the boots is that we now have suffixes we can work with, the +1 Spectre mod, and a second Influenced modifier that we don’t care about. The next step is the expensive step for this craft. We will want to use a Maven’s Orb. This will remove 1 random Influence modifier from the item and upgrade the tier of another Influence modifier. Since we only have 2 (one of which is our Spectre gem mod), it will be a 50/50 chance to either remove or upgrade the +1 Spectre mod to a +2 Spectre mod. If it fails, you’ll have to restart the crafting process from the top.

Once you have your +2 Spectre boots, it is time to make sure we get some Movement Speed as well as Energy Shield or Life on them. The easiest and cheapest way to do this is to use the Harvest craft “Reforge a Rare Item Keeping All Suffixes”, which will reroll the item but the suffixes will be untouched; this is why we want the suffixes filled out first, because if the item has 2 suffixes this craft can actually add that last suffix, which can turn it into something we don’t want to work with. You will simply repeat this process until you get a desired Movement Speed roll, Life or Energy Shield, and fine-tune the remaining affixes with Harvest crafts such as resistances, remove/add Defence for Energy Shield, or remove/add Life for higher Life rolls.

A note on this part is that if you land on a high tier Life roll that you want to keep, it would be wise to consider utilizing “Augment Speed” and “Remove/Add Speed” Harvest crafts for the Movement Speed.

I made sure that the pair of boots I made for my Spectre build during 3.13 Ritual League had 1 high ES roll, 35% Movement Speed, an an open prefix to bench-craft “Cannot be Frozen” to open up another flask slot (since I’d no longer require “..of Heat” to remove freezes)!

As much as I love making guides, it is very crucial in a game like Path of Exile that you play the game the way you enjoy playing it. This guide merely describes the most effective approach to craft the best items.