This guide will teach you how to craft Large, Medium & Small cluster jewels for the end-game meta minion builds.

There are 2 types of large cluster jewels commonly used by most end-game minion builds and thanks to Harvest crafting being available in the game we can abuse this extensively.
The cheaper of the 2 and also less effective one uses the 8 passive base jewel & 2 important notables with a third notable forced in to a specific spot in the jewel to avoid “wasting” points This is very easily managed via the Path of Building program where we create a Large Cluster jewel with the 2 important notables and then add a third, the idea is for the third notable to be at the far side allowing us to ignore it and pick up the 2 important ones as well as the jewel slots. 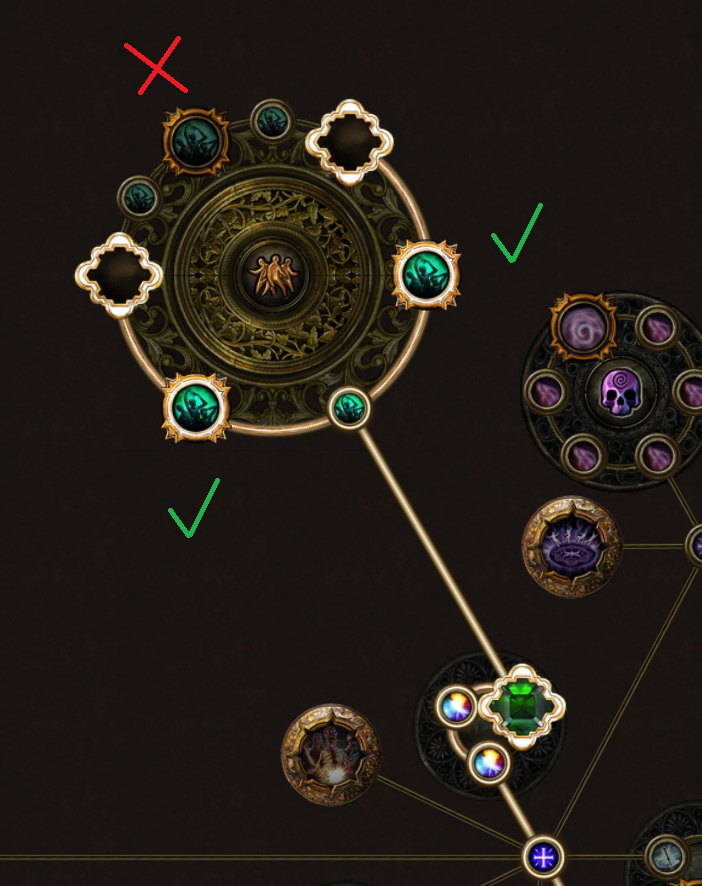 The important notables for we are looking for are very straight forward, Large Cluster Jewels can have 1 Suffix notable and 2 Prefix notables, the suffix notable we want is Vicious Bite and the important prefix notable is Renewal. As seen by the image above these 2 notables are directly connected to the first point inside the jewel on a 8 passive Minion Damage large cluster jewel. The node on the far side is in this example Rotten Claws By designing the cluster jewel this way we are able to save skill-points as we gain access to the jewel slots for our Medium Clusters.

The crafting process for this is so simple it hurts, we will be using “Reforge a rare item with new random modifiers, including a Critical modifier” (there’s 2 version of this, the other include the text: “…Critical Strike modifiers are more common”)

By looking at PoEDB Mods we can clearly see the item level requirements for this and we can also see that the only critical strike modifier available is in fact the Vicious Bite, this means that everytime we use this reforge we will always get Vicious Bite which is the hardest modifier to get normally. We will repeat this reforge craft til we hit the craft together with “Renewal”, once we do we are looking to open up the second prefix slot, if the jewel already has an open prefix we move on to the next step, if there’s a modifier in the way we will look at the mods and see if it is possible to be removed using harvest crafts. If it’s not possible which is the case with +to mana modifiers as an example we will either use a

Orb of Annulment or just keep using the Reforge Crit harvest craft. Once we have the jewel with an open prefix slot, Vicious Bite & Renewal we want to make sure the next craft we use will guarantee the correct outcome, in this case we can use “Augment a rare item with a new Attack modifier” since both suffix slots are in most cases filled (if they are not you use this craft twice) there are only 2 possible things that can happen to the jewel:
You either get your desired “Rotten Claws” as the prefix notable or you will get “Added Small Passive Skills also grant: Minions have 1-3% increased Attack and Cast Speed” which is a good modifier to have, this modifier can only happen if there is a suffix slot open. The third modifier that has “attack” tagged is a notable and since the jewel already have a suffix notable it is therefor not able to roll that one as a large cluster jewel can have 2 prefix notables and only 1 suffix notable.

The above crafting process is strictly for the “cheaper” variant of the end-game large cluster jewels for meta minion builds. Below I will go through the process of the more expensive and trickier version which grants a lot more damage on top of some extra eHP scaling.

To achieve these modifiers the best & cheapest way we are going to start with the prefixes since the #% increased effect doesn’t have any tags. You can either

Regal Orb the item or you can

Orb of Alchemy til you hit Tier 1 35% increased effect together with Tier 1 either Life or Energy Shield depending on how you play your build.
Once this has been sorted we want to “clean” our suffixes, you can either use harvest crafts to remove the mods you don’t want and if they are not deterministically removable you use the craft “reforge item whilst keeping the prefixes” til you can clean it. Once the item is clean you have to start with the “Augment a rare item with a new critical strike modifier” this will as mentioned above guarantee the Vicious Bite notable to be applied to the jewel. Once this notable is there we are able to use either “Augment a rare item with a new attack modifier” or “Augment a rare item with a new caster modifier” as both will only be able to apply the modifier “added small passive skills also grant: minions have 1-3% increased attack and cast speed” then you will simply do the “Remove/Add Attack or Caster” craft as it will only ever touch that specific modifier until you hit 3%. It sounds super easy and it really is, only the starting process of getting the prefixes for this super efficient jewel is annoying to get.

As of the current state of crafting GGG has saw fit to remove/change some of the tags on certain modifiers making it a lot cheaper to purchase pretty much any medium cluster jewel most meta minion builds uses rather than trying to craft them ourselves.

This category is a tough one as there are multiple small cluster jewels depending on which build you play and how you want to play it. The best small cluster CI jewel costs around 200-400 exalteds to make and would only ever give around 200 more energy shield over a jewel you can purcahse for a fraction of that cost. Due to this nature I’ll hold of on explaining these crafts as they are only for the absolute end-game minmaxers. If you still want me to include this in the guide, please do let me know in the comments below.

As much as I love making guides, it is very crucial in a game like Path of Exile that you play the game the way you enjoy playing it. This guide merely describes the most effective approach to craft the best items.