Patch 3.4 Delve League was accompanied by the introduction of several new systems of gameplay, all of which remain within the core game even now. Be sure to check out our Delve guide to get a better understanding.

One of these new features was the ability to craft items in new and unique ways using items exclusively found within the Azurite Mine, known as Fossils and Resonators.

A Fossil is a special type of crafting item, and there are a couple of different types with each having different affixes. Socketing a Fossil into a Resonator allows it to be applied to an item (consuming both Fossils and Resonator in the process), but the effects are different depending on the Fossil(s) used. Resonators have several types, with some having only a single socket for a Fossil, while others have up to four. The item will be rolled with random affixes, as if a

Chaos Orb or an

Orb of Alchemy was used, however the Fossil allows you a greater degree of control over what the results are. For example: 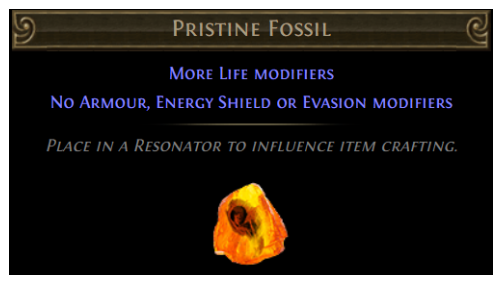 By placing a Pristine Fossil in a Resonator and applying it to an item we are able to guarantee that the item will always have a Life roll. The cost of this, however, is that many Fossils block other affixes from being rolled onto the item as well — in this case, Armour, Energy Shield, and Evasion mods are prevented. While this may seem like a downside on the surface level, with proper knowledge and guidance, this caveat can be quite the advantage indeed. By combining several types of Fossils, we can dictate which affixes are eliminated and force certain combinations of mods onto items with very little variance.

In this guide, we will explore the basics of Fossil Crafting, how to use it to your advantage in any league, popular crafts that can be made for profit, and more. While many players are already aware of the benefits of Fossil Crafting, the majority of players are in the dark about just how potent the results can be and this guide will be your torch.

At the bottom of this page, we have a section that lists all the types of Fossils, what they do, and where they are found.

Resonators are a socketable currency that Fossils can be placed in, allowing the player to apply them and their unique effects to items. Resonators range from one to four sockets, and used to have two types: Alchemical and Chaotic. As you might expect, these functioned exactly the same as their epithets.Alchemical has since been removed, and will not be discussed further than this brief mention.

As you might imagine, Chaotic Resonators are the generally preferred type of Resonator, as they do not require you to use an

Orb of Scouring between each Fossil roll. This saves both time and currency in many situations.

Most Resonators can only be found behind Fractured Walls.

You can see a list of all the types of resonators at the bottom of this page.

What Are the Best Items to Craft?

This is a very tough question to answer in a guide, as the items that yield the most profit can be in flux depending on the current challenge league, the number of people crafting said item, and the current duration of the league. As you might expect, items crafted towards the end of a challenge league are in significantly lower demand than items crafted within the first 2-6 weeks of a league, and the best items to craft tend to shift as players’ purses expand throughout the course of a league.

With this small disclaimer out of the way, here are the items that generally yield the best results:

Okay, so what is the best item overall?

Well, high-level influenced items always have the highest potential of any items due to some of the disgustingly powerful affixes that are possible. Many of them do not provide the most reliable and consistent profit (especially Jewelry), however, they do offer the highest potential payouts.

Stygian Vises is generally considered to be a good source of income — especially early in a league — as it presents relatively low financial risk and turns a consistent profit. One of the main reasons for this is that Fossils can provide increased Fire/Cold/Lightning damage, which is exclusive to Fossil crafts.

The “+3 Bow” is one of the best kept secrets of Fossil Crafting, although it has steadily become a more and more popular phenomenon. This is an especially potent craft when done with a Shaped version of a bow, as Shaped weapons have particularly potent affixes. For example, our Elemental Hit Deadeye build crafts an exceptional Shaped weapon for a bargain price. Certain builds, such as our Herald of Agony Occultist , also use Elder Bows, as well.

The Perfect Fossil is an underrated and underused type of Fossil that is especially potent when used on a Weapon or a Chest. Perfect Fossils roll quality, up to a maximum of 30%. An item’s quality improves its chance to link by a percentage equal to its quality. This means that if you are crafting an item for yourself — for example, a +3 gems bow — it is always worthwhile to craft additional Quality first, as it greatly improves your chance of linking the bow with

Orb of Fusings later on.

How to Craft Items

Here are some example processes for how to properly craft the items we touched on above. If you have any questions or recommendations, feel free to leave them in the comments below!

The +3 Gems Bow is one of the most popular Fossil crafts, as it only costs a few

Divine Orbs (maximum) and can be resold for exponentially more currency. Here is an example (Shaped) bow. 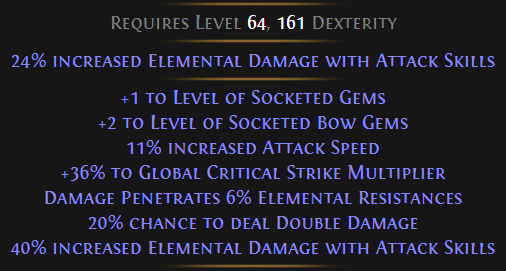 To craft the +3 Gems Bow, you will want to start with a base of as high item level as possible (we recommend Item Level 83 or higher).

You now want to get the correct colors on your bow using the Vorici Method. This involves using the Crafting Bench and

Chromatic Orbs). This involves alternating between numbers of sockets using the crafting bench to greatly increase your likelihood of acquiring your desired colors. Now, 6-Link your bow using

Orb of Fusings. The increased quality will greatly increase your chance of success. The bow is mostly complete now; all that is left to use a little currency and fossils on it until you are happy with it. You will need to following items to craft the +3 Gems prefixes, and a Resonator to socket them in:

Use a 3-socket resonator socketed with a Metallic Fossil, Prismatic Fossil, and Corroded Fossil on the bow. Since you are only guaranteed a single prefix, it may take several attempts, however, the chance is very good that you will receive both remaining prefixes in 1-3 rolls. Repeat the Resonator reforging until you are happy with your bow. The most important stat after the +3 Gems is Attack Speed — remember you can always craft anything else you need, or re-roll the bow again later on.

Stygian Vises are one of the safest and most popular crafts. There are varying levels of investment involved, however, the technique that produces the highest returns is using 3-socket Resonators. The required Fossils are:

Pristine and Prismatic Fossils are the most essential, as they force

Simply roll the belt over and over using Resonators until you are satisfied with the result. Please keep in mind that this method might only be profitable during the early days of a league. 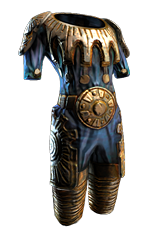 Since Energy Shield is based off of quality, it is important to first make the Quality 28-30% using Perfect Fossils. Ensure the

Shaper or Elder bases are not required unless you have a specific affix in mind.

The Fossils to use — in order of priority — are:

In most cases, the best way to roll an 800 Energy Shield+

In the interest of completion, we list here all the types of Fossils and Resonators.

There are extremely high amounts of permutations of possible Fossil combinations and item crafts. Due to the nature of Path of Exile and its ever fluctuating economy, there is no concrete advice on the best possible crafts at any given moment. One thing that is important to understand, however, is the sheer potential of Fossil crafting and its profitability.

Solo Self-Found players, in particular, can leverage heavy benefits from this system to create extraordinarily powerful items that would take thousands upon thousands of hours to find organically or to craft without fossils.

Good luck with your crafts, exiles!