Though we live and act as individuals,
in truth, we are tethered together.
The barriers that divide us need not be broken
for our spirits to become entangled. 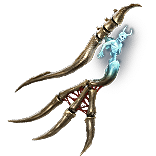