How to scale Poisons and what are the best ascendancies for that purpose.

After the double-dipping for Poisons and Ignites got changed long time ago people seem to not understand very clearly how to scale these damaging ailments. New stats got introduced for that purpose. “#% increased damage with Ailments from Attack Skills while wielding a Claw” is one perfect example of what exactly scales the Poison damage. It is often misunderstood that if you get Melee Damage for example, you will also gain damage to your Poisons, which is incorrect. You have a certain amount of base damage varying based on your Weapons, which is then scaled by all of your Ailment Damage increases and Support Gems.

When it comes to Ascendancy classes, non-Crit Pathfinders wins the cake in my opinion. Assassins are also great but you have to invest a lot of points into Crit and damage in general, which makes you feel like a sheet of paper that waits to get one-shot.

What Poison characters I’ve played this league and how they performed.

The Scourge Arrow Pathfinder turned out to be an excellent Bow Poison-based build. In general Pathfinders are amazing because of the Poison proliferation mechanic they gain via Nature’s Reprisal and all of the other amazing flask nodes. The clear speed of the build was very good and the single target was kind of decent, but not great. The character also ended up with tons of Armour since I am playing Hardcore and

Vaal Molten Shell is something very important to scale these days. As a Pathfinder I used

Jade Flask along with

Grace and Iron Reflexes, which resulted in more than 80k Armour. This translates into a 30k Vaal Molten Shell for 15 seconds. The character also had around 6.5k Life without

Kaom's Heart. It died to some Red tier Blight, simply got one-shot by the shotgunning Cabals in a tight corridor.

The Cobra Lash Assassin was Crit-oriented Dagger build using Evasion and Acrobatics for a form of defense. The character made a great use of

Bino's Kitchen Knife since I only had to throw one set of knives before moving on to the next screen of monsters. Its weak points were defenses. I managed to stack a not so bad amount of defenses but still got one-shot with around 5k Life. The character was using Acrobatics, Phase Acrobatics more than 14k Evasion along with a powerful combination of 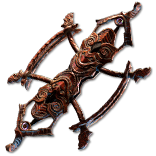 Mistwall. Characters like these get hit once every 5 maps or so but it is just a matter of time before you fall over. When it comes to damage the clear speed was the same as the Scourge Arrow Pathfinder but the single target was slightly better, keep in mind this character feels way squishier though.

The Viper Strike Pathfinder is honestly my favorite character I’ve played for a long time. The things this character could achieve on a budget were amazing. It was a Non-Crit Claw Viper Striker using only

Melee Splash Support while clearing, which was swapped with

Multistrike Support for single target. The character ended up with 6,7k Life by level 90 with the same defense mechanic like the other Pathfinder – tons of Armour. The clearing got carried by Pathfinder’s Nature’s Reprisal again and the single target was just amazing. You are basically using

Whirling Blades to move around at light speed and one-tapping packs of monsters. When it comes to Metamorphs and bosses you have

Vaal Molten Shell. In that time window you can easily melt down any monster in the game since you are applying tons of Poisons, which last 10+ seconds.

Viper Strike while dual wielding is very underestimated in my opinion and is best of the three Poison-oriented characters I’ve played so far.