GGG has provided us with the Level 20 Gem Information for Echoes of the Atlas’ new Gems today!

You can find the official reveal for ALL the changed/reworked and new Skill Gems over here: https://www.pathofexile.com/forum/view-thread/3009537

Let’s take a look at the Level 20 version of the Hydrosphere Gem: 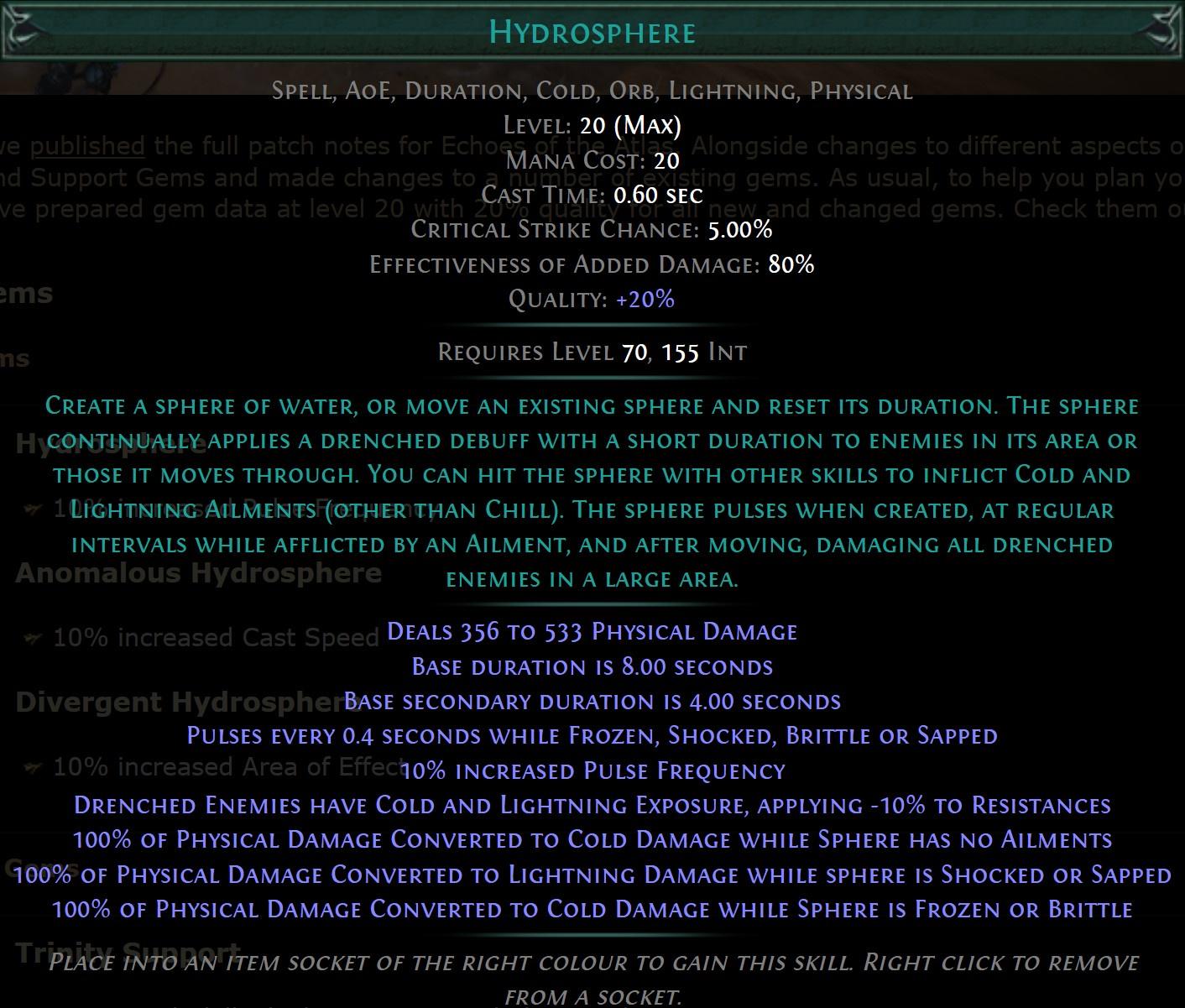 Let’s break it down a little:

The base damage of the Orb is 356 to 533 Physical Damage, which is considered fairly decent for a skill that hits once every 0.4 seconds. At base values, this will deal roughly 1,111.25 Physical DPS, which is around the usual DPS you can expect from support abilities. Do note however, that this ability, by default, converts 100% of the pDPS to Cold DPS.

The skill itself will create an Orb of Water, which can be moved by using the skill again. This will reset it’s duration back to the original duration of the skill, which is fairly important, as the overall duration is fairly low at 8 seconds. Continously moving it towards packs of enemies is going to be an integral part of the playstyle for any builds featuring this Gem.

The Sphere constantly applies a new status debuff, called “Drenched”, to the enemies in it’s Area, as well as Enemies that it travels through. This ailment becomes more important later, but for now, know that it applies Cold and Lightning Exposure to them, at a -10% value for a (base) duration of 4 seconds.

You can, at any point during the Sphere’s duration, hit it with another Skill, in order to inflict Cold (not chill) or Lightning Ailments to it. This will cause multiple things to happen:

As you can see, moving the Orb and applying the “Drenched” debuff is extremely important, as the Pulse-Radius is vastly larger than the actual Radius of the Orb itself (in which it can apply “Drenched”). Preparing groups of enemies with “Drenched” will allow you to easily hit hundreds of Enemies at once with every Pulse.

The Sphere will Pulse in this way, under three specific circumstances:

Lastly, the Skill Gem comes with the usual three different versions, granting different advantages for quality on the Gem:

I’d imagine the most optimal choice being the Superior version in most circumstances.

The Best uses for this new Gem will likely be as a supporting Skill, rather than a Main-skill, but I would not count it out to be Main-skill viable.

Let’s take a look at the Trinity Support Gem at level 20: 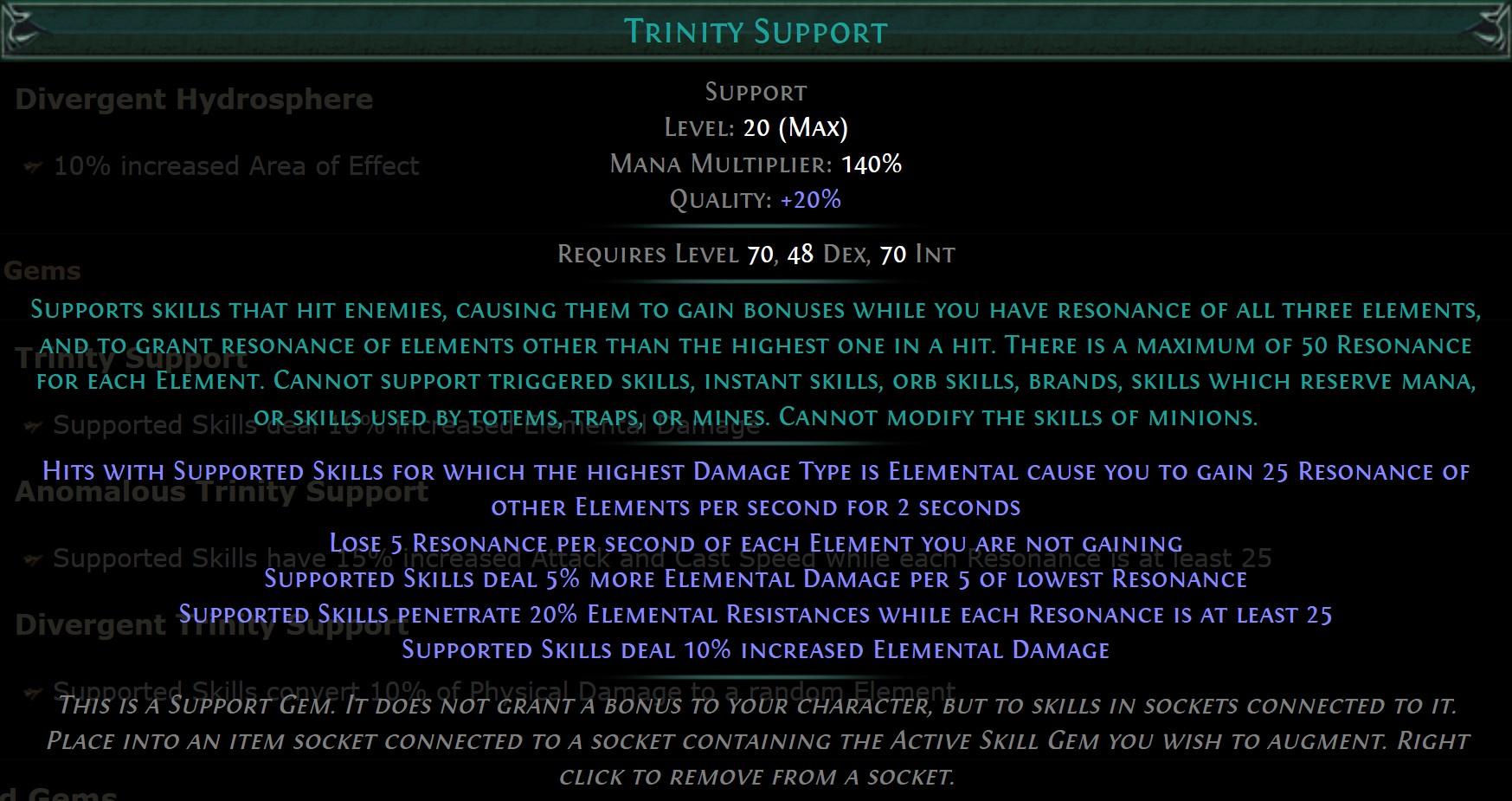 Not as hard to understand as the Hydrosphere, but still a few things I’d like to clarify:

You gain 25 Resonance over 2 seconds for the Elemental Damage Types that did NOT deal the Highest Damage with your hit.

Frost Blades, you will likely deal a majority of Cold damage. You would thus gain 25 Resonance for Fire AND Lightning, over the next 2 seconds.

There is a Maximum of 50 Resonance PER Element type, for a total of 150, if you acquire all three at once.

You will lose 5 Resonance per second of each Element you are not currently gaining, through the afforementioned system, meaning you have 5 seconds before you reach 0 on both Fire and Lightning in our previous example, if you only hit once with the

Frost Blades.
If you continously keep hitting enemies, you will reach 50 Fire AND 50 Lightning Resonance, but 0 Cold Resonance, as you never hit an enemy with a Skill that does NOT feature Cold as it’s Main Damage Type.

Resonance from multiple versions of this Gem stack, in the sense that you can GAIN all three types of the Resonance at the same time, if you decide to use two different skills.

Because the gains do not stack, you cannot gain 50 Resonance over 2 seconds from Lightning in this example. However, you will be able to effectively disable the de-generation of Resonance with this setup, as you are never NOT generating Resonance of all three Elemental Types.

This is, by far and away, one of the most powerful Support Gems in the game, if build around properly.

If we do the math real quick:

Considering we generate Resonance at all times for all three Elemental Types, we will max out at 50.

In Path of Exile lingo, “of Lowest Type”, usually also means that if ALL of them are the lowest (which they technically are, if they’re all equal), you get to double/tripple dip on the bonuses. One big example of this is the

The Wise Oak, which is famous for it’s “Elemental Resistances Juggling” feature, to gain the maximum beneift from the “Lowest” and “Highest” features it provides.

With all three Elemental Types at 50 Resonance, that would mean we’re getting a ridiculous 150% More Elemental Damage from this support gem. Whether this is how it works or not, is hard to tell, but based on the previous example, there’s a very obvious precedent for this being the case, under specific circumstances.

It’s fairly unlikely that it will work int way described above (with the tripple-dipping), but the 50% More Elemental Damage from the gem is already good enough as is! On top of that already insane benefit, you also get to penetrate a whopping 20% Elemental Resistances, if you have at least 25 in each Resonance.

If all these features work as advertised, this will easily become a must-have Support Gem for EVERY Elemental-based Build in the game, even without the tripple-dipping. Usually players had to choose between Penetration OR Damage, now you can easily get both!

There were a ton of other changes and reworks for Skill Gems, but we’re not going to go in-depth on them here, as the changes aren’t impactful enough to really warrant such treatment.

I hope this quick rundown gave you a better idea of how the new Skill Gems function and whether you want to include them in your upcoming Builds or not.

If you’re interested in the changes, you can find the Patch Notes for the 3.13 release right here: https://www.pathofexile.com/forum/view-thread/3009157

Enjoy your 3.13 League Start and I’ll see you in Wraeclast, Exile!