The Atlas Passive Page of this guide is fully updated for Scourge 3.16, and you can trust the recommendations there. However, this first page of the guide will require us to test the system more after the league is live, so it is not currently properly updated for 3.16. Thank you for your understanding.

This Echoes of the Atlas Expansion guide aims to teach you how to navigate the new Atlas passive tree, get the most out of your Maven boss encounters, and collect the newly-introduced rewards of this new, end-game focused expansion.

While this page goes over most things about the Echoes of the Atlas Expansion, it does not feature the new challenge league. For that, you can check our dedicated Scourge league guide.

The Echoes of the Atlas

With Path of Exile: Echoes of the Atlas (3.13), Grinding Gear Games is further enhancing the end-game experience of the Atlas of Worlds system, by adding an entirely new map-focused passive tree, giving more meaning, challenge, and rewards to boss fights, as well as adding a never-before seen boss-rush mode to the world of Wraeclast. Furthermore, as every new expansion traditionally does, it adds a whole new end-game boss fight to the game in the shape of The Maven herself.

Note however, that this new endgame runs ALONGSIDE the already established one from the previous expansion, Conquerors of the Atlas. You are still required to hunt down the Conquerors, acquire their Watchstones and beat the Sirus encounters, to progress during the Endgame.

The expansion mechanic itself features no timers and a minimal amount of RNG. To unlock the first encounters with The Maven, simply progress your Atlas into the lower tier stages (Tier 1-5). In one of your maps, you will meet a new NPC called The Envoy, who will warn you of the impending visitation by The Maven at the end of the map.

Note: You will have to meet The Envoy multiple times, before he heralds in the coming of The Maven at the end of your map. This usually takes about 5-10 maps, before she will appear for the first time.

Once you have defeated the map boss, The Maven will collect its soul, marking the map on your atlas with a corresponding icon (essentially locking that map boss from being “collected” again), and disappear. After meeting her for the first time, you unlock a special button on your map device which allows you to summon her at will to any map you wish to run. 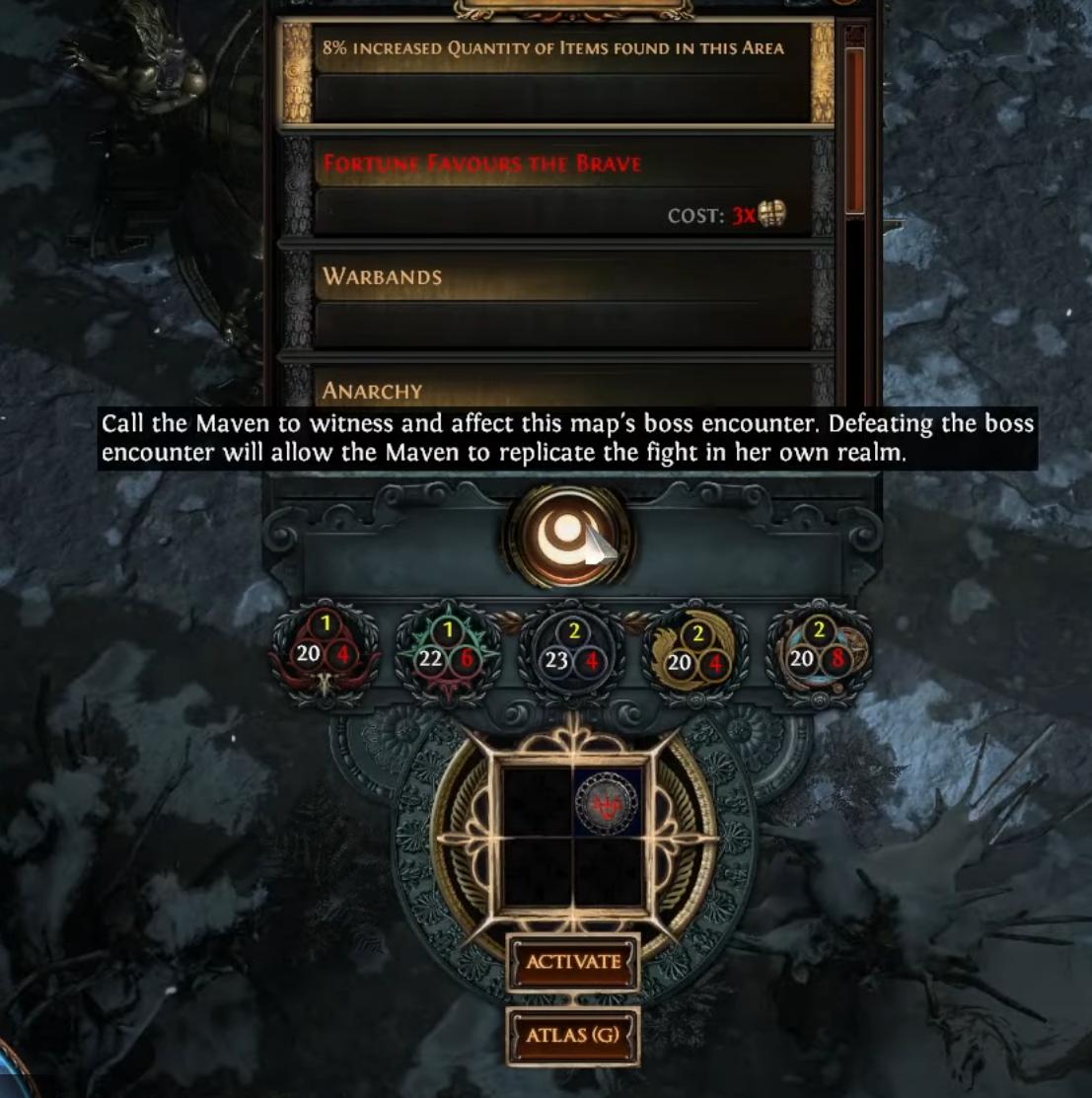 By slaying three map bosses in the Maven’s presence in this fashion, you’ll earn an invitation to her realm where she will request that you defeat these bosses simultaneously.

This will represent a huge challenge for a lot of players, especially early on during the league, when your characters don’t quite have the levels or gear required to be powerful enough for it. Luckily, you can accept this invitation at your own leisure, even going as far as to entirely ignore it, if you simply wish to focus on your atlas progression, rather than experiencing the new expansion’s content.

Once you have demonstrated your strength, she challenges you to defeat 4 bosses, then 5, then 6 ,and finally 10 at the same time. The challenge to beat ten bosses at the same time will also be a huge trade factor going forward, as the encounter itself is a usable, craftable and tradeable item. There are likely specific combinations of bosses that will be vastly preferred by the overall playerbase.

Only after beating one of these ten-man boss fights yourself, can you take on the new pinnacle boss of the Atlas: The Maven herself.

During your attempts to impress The Maven, you will periodically be called to her own domain to beat the aforementioned boss-rush challenges. As with everything difficult in Path of Exile, these challenges don’t come without reward. For each of the areas on the Atlas (Haewark Hamlet, Tirn’s End, Lex Proxima, Glennach Cairns, New Vastir, Valdo’s Rest, Lira Arthain and Lex Ejoris) you will unlock a passive point to slot into their respective new trees. 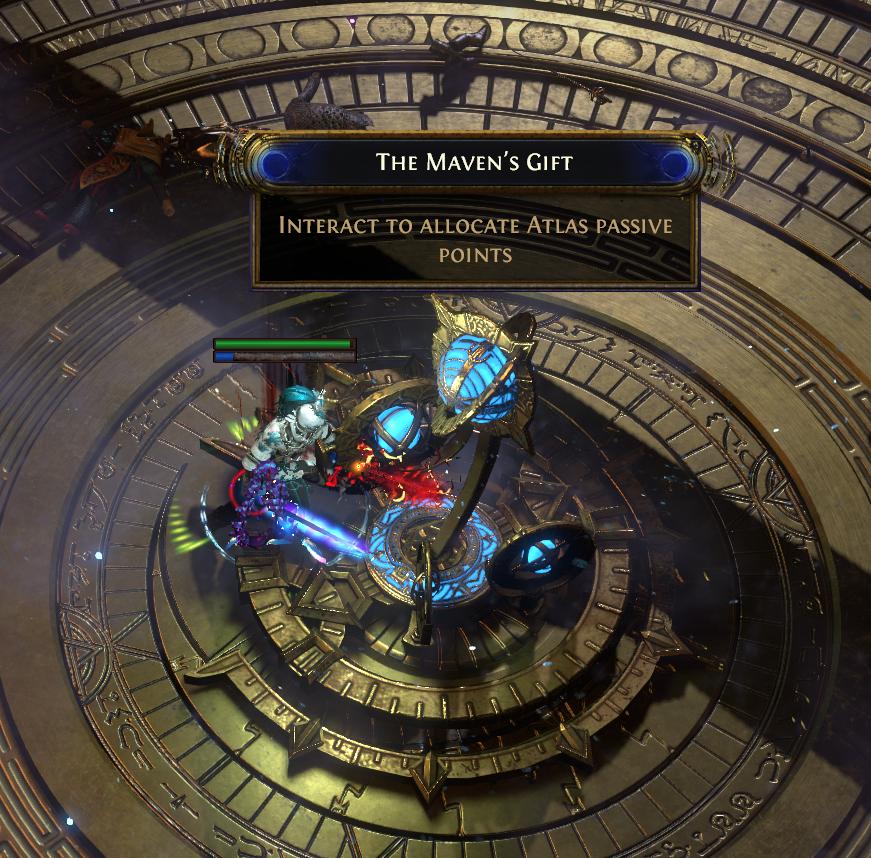 Each area has its own unique tree and none of them share any of their nodes. The primary gain by improving each area in this way is increasing the quantity and quality of rewards provided by different league mechanics. As an example, let’s take a look at the passive tree for the Glennach Cairns region of the Atlas:

With a total of 10 possible points being unlocked per region, you will be able to obtain 5 of the major nodes. You could, for example, focus entirely on the Legion league mechanic, by spending 6 points on “Monumental”, “Face to Face”, and “Protracted Battle”, vastly increasing its quantity and quality of rewards, as well as its frequency of appearance. With the 4 remaining points, you can still acquire both of the ever-popular Beyond league mechanic upgrades, “Scent of Blood” and “Torn Veil”. Alternatively you can entirely focus on Strongboxes or Incursion, or any combination of the aforementioned.

The passive points are not set in stone. They WILL be able to be refunded and re-allocated using a new, currently unknown, currency. As such, don’t be afraid to experiment around and figure out which league mechanics you would like to pursue!

Furthermore, whenever you run a map in an Area featuring any bonuses from the Atlas Passives, you will also be informed about this, as shown in the picture below, so that you always know WHEN, HOW and WHAT to invest into, while preparing your maps! Very awesome feature! 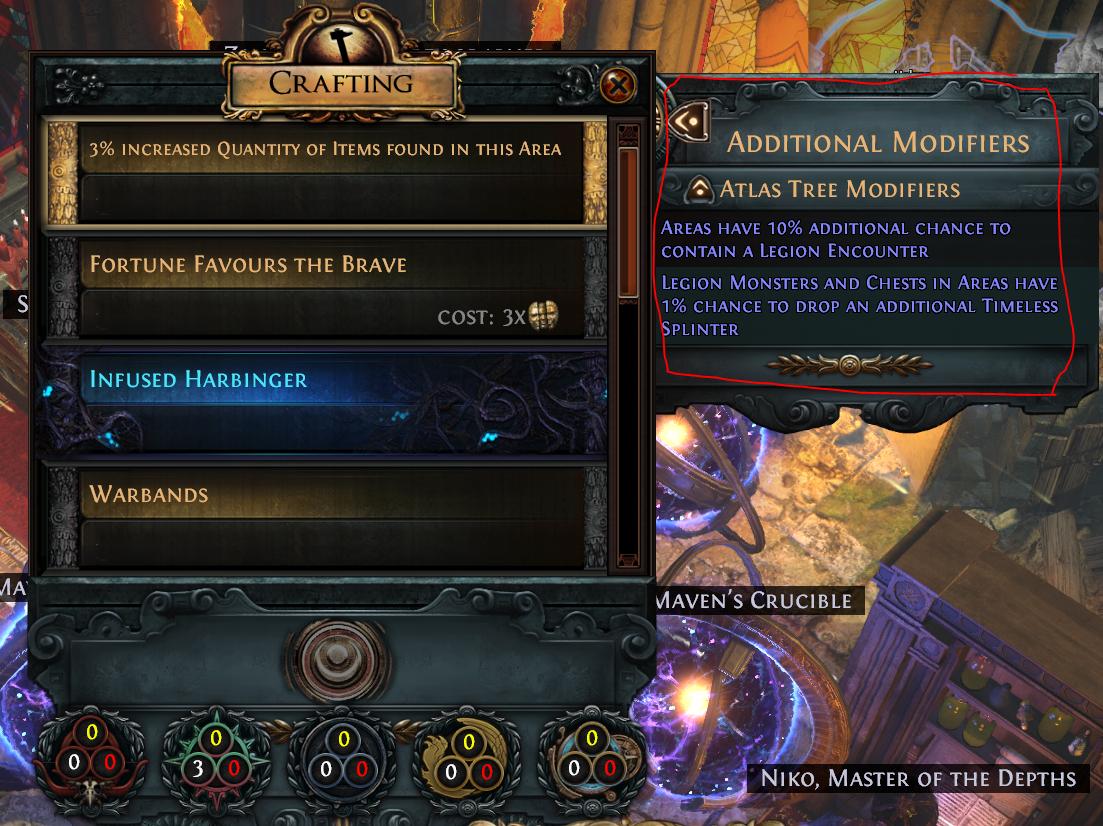 This new system represents a big step in the direction of player choice when it comes to interacting with core-implemented league mechanics and seems well received by the overall community. 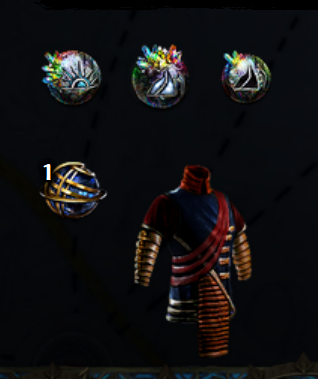 With an end-game league, come new end-game rewards! Outside of the usual unique items, Divination Cards and skill gems, Grinding Gear Games has introduced another level of rewards for this expansion, in the form of new Watchstones for your atlas, as well as the Maven’s Orb.

The new Watchstones, which you obtain fairly late into your atlas progression, are straight upgrades to the currently existing quest-related ones:

As such, your goal is likely going to be to replace all 32 of your quest-given Watchstones with new, crafted ones instead.

We will, as per usual, give a rundown of which mods are the best, as well as our recommendations as to which ones to go for, once the full list is available.

The new ultimate boss of the Atlas, The Maven, will drop a new crafting currency, with a similar rarity to the

To provide a quick crafting example: 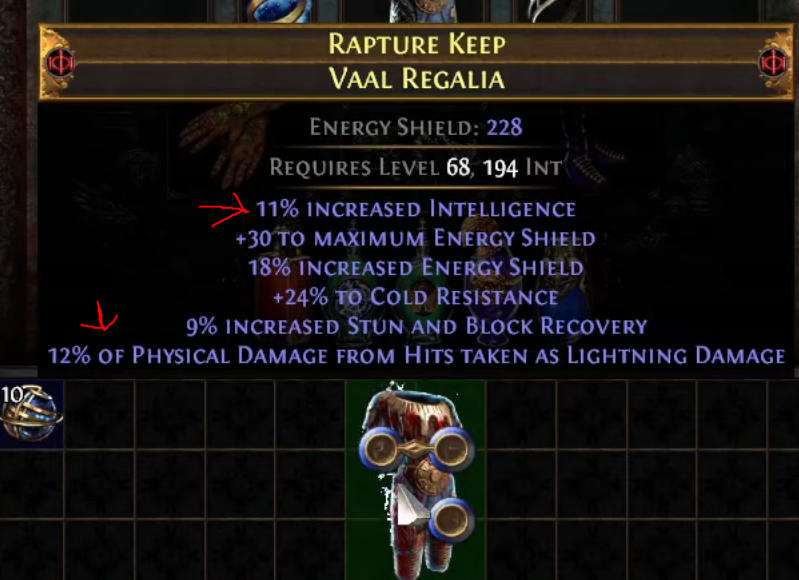 Once the Maven’s Orb is used on an item, it will randomly choose one of the mods (no weighting of affixes, meaning an item with two mods will have a 50/50 chance, an item with three mods will have a 33/33/33 chance, etc.) and remove it from the item. One of the other, remaining, influence modifiers will then be upgraded by one tier (again, chosen randomly).

If the chosen mod is already a T1 mod, it will then be upgraded to a completely new, extremely powerful T0 version of that mod, that is not available through any other means. Let’s use the Maven’s Orb on our example Regalia: 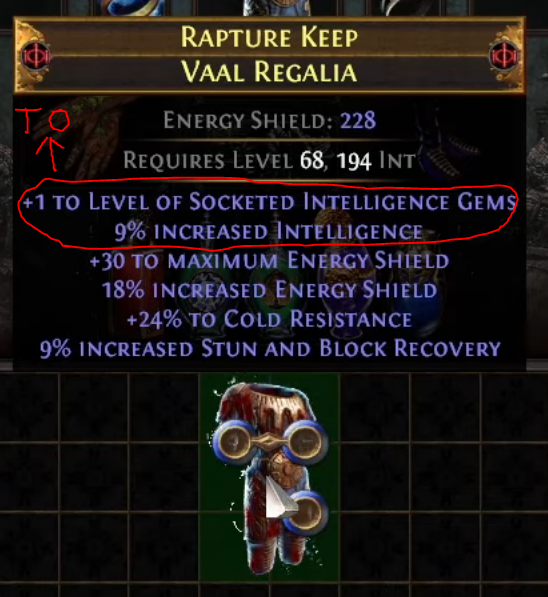 As you can see, the orb removed one of the mods (#% of Physical Damage from hits taken as Lightning Damage), while upgrading the already existing T1, #% Increased Intelligence modifier to a T0 version, which now ALSO grants +1 level to socketed Intelligence gems. The last important aspect of this crafting procedure is that the other influence mod was removed ENTIRELY, meaning your item will always return with one free affix at the end of the craft, allowing you to either slam it or potentially craft a new mod in its place.

This new orb opens up a ton of crafting possibilities for the absolute end-state of an item. Do not expect to get your hands on a lot of those (orbs AND crafted items), as they are going to be very expensive, based on their current power projections.

Other Changes and Additions

Outside of the major additions outlined above, there are of course some smaller ones, which will leave a lasting impact on the world of Wraeclast and your time in the game.

First and foremost, all 19 Ascendancy Classes have been rebalanced entirely. Three of them, namely the Deadeye, Inquisitor, and Elementalist, have seen complete reworks, while the rest have seen numerical changes or smaller-scale reworks. This will, undoubtedly, shake up the meta for quite some time, as the Ascendancy classes are what really make or break a character in Path of Exile.

Here’s a quick look at three of those Ascendancies that have been revealed so far:

While most changes here are purely numerical, with some slight mechanical changes (such as the Occultists DoT multiplier being converted into a flat “More” multiplier, to work with a wider variety of builds), we also see that the Slayer Ascendancy, has received quite the big switch-up, by simply interchanging the positions of the “Brutal Fervor” and “Endless Hunger” nodes. This allows players easier access to the Slayer’s signature “Overleech” mechanic, without having to fully commit to a full-leech playstyle, as was previously the case.

For the first time in quite a while, Grinding Gear Games has also added entirely new map tile sets, bosses and locations to explore. This new expansion adds a whole eleven new maps to the atlas. These include new locations such as the Dry Sea, Forking River, Frozen Cabins and Grave Trough. This brings the overall map number, and your target for the atlas completion, to 164.

The Echoes of the Atlas expansion brings a much needed injection of player choice, coupled with some new end-game content for experience players, while making sure not to leave lesser-experienced players behind. With the reworked Ascendancies, new map layouts and entirely new end-game section to grind and power through, GGG has once again opened the gates for a vast amount of excitement and fun.