Following the recent minion “rework” that took place in the previous league, a lot of minion players find themselves wondering how to fix the plethora of issues that are currently plaguing minions in terms of damage and survivability. Now, what if we can circumvent those issues by using two of the best mechanics in the game right now, poison damage and minion invincibility? 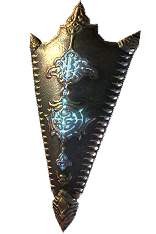 Aegis Aurora version. Crit immune, shock immune, 200% movement speed, Profane Bloom explosions, and a 40 to 80k ehp on pretty much full unique gear with the exception of 2 rare rings and a few clusters, this build is a jack of all trades.

In the hands of a new player, this build pretty much obliterates all non-uber content, and tanks all sorts of attacks including Sirus Meteors, and in the hands of a more experienced player, it can even do Uber Bosses.

For the 3.20 Forbidden Sanctum League, this build has received some nerfs and some buffs. Our damage versus regular monsters is quite a little bit lower, but that doesn’t matter that much since we were relying on the Profane Bloom Explosions for the clear. Our damage versus Bosses is a little bit higher, we are gaining anywhere from 1 up to 2 Million DPS.

Below there is a video guide made for Youtube for the 3.20 Version.

✔️ Amazing Poison DPS anywhere from 10 up to 20 Million

❌ Not a League Starter. This build is quite expensive if you want to max it out at 20 Million DPS. However, it can definitely be done as a second build as long as you’re able to play a few hours (1-3) per day and generate 1-3 Divines per hour.

❌ Not for Everyone. This is a minion build after all. Although I’ve seen some people that don’t play minions enjoy this build, I’m pretty sure that if you really dislike minions, you’re probably not gonna like this one as well.

❌ Limited Uber Viability. Since the build is using mostly unique gear, it’s quite hard to cap Spell Suppression. Some of the Bigger attacks from Uber Bosses will usually be 1-2 shots.

While mapping this build is a tanky walking simulator. Cast a Desecrate, wait for the Skitterbots to burn a few enemies, and you summon the spiders which are gonna take care of everything.

To scale damage you’re mostly looking for minion clusters and you’re gonna be speccing into quite a lot of the minion damage nodes on the Tree.

Besides that, you’re gonna need an “Amanamu”s Gaze” and using 5 Ghastly Eye Jewels you’re gonna scale the poison damage of your minions.

For the Ghastly Eye Jewels you’re mostly looking for a few stats:

All of that neatly packaged in a Full Unique set–up, that can easily be improved by more experienced players with a lot of currency.

The current PoBs for this build are always available here:

For help with this build go to our discord and ask for help there. and one of our moderators will help you ASAP: Discord

Sadly, this build is almost never going to be a league starter because the Arakaali’s Fang is quite expensive, so you’re gonna have to run whatever Witch build you want until you farm the needed currency to transition into this build.
For the Acts, I usually run a Witch Necromancer and I use the Infernal Legion Skitterbots and Infernal Legion Summon Skeletons with Minion Instability allocated on the Passive Skill Tree, so I pretty much just blow my way up until Act 10.
After that, I transition into a Minion Army Necromancer which is basically using all sorts of minions until I manage to farm up all the currency that I need for this build.

For more details, check the Leveling section below.

This build will not function as a league Starter. You need at least 10 Divines to be able to assemble a serviceable version. After you get around 10 Divines, start with this 6.5 mil version, and as you start making more and more currency, start upgrading the build as much as you can, and you’re probably gonna reach around 20 Million DPS (check the 4 PoBs in the PoB section).

Summon Skeletons as a reward. Link it to

Infernal Legion Support which will be available at Nessa at the same time, just after you defeat Brutus.

On your Passive Skill tree, you’re gonna go straight for the Minion Instability Keystone and you’re pretty much ready to blow up your up until act 10.

Once you defeat Fidelitas in Act 2, you’re gonna be able to buy

Summon Skitterbots from Nessa which will be your second

Infernal Legion Support set-up. Now you’re pretty much an Autobomber with the

Summon Skitterbots , but the DPS is not gonna be enough for Rares and Bosses, so you’re gonna have to spam your

Our third Minion set-up is gonna be a

Summon Raging Spirit which is gonna be link to

If you wanna go overboard (I usually do), add some

Raise Zombie and a

Summon Carrion Golem, and you’re gonna have a huge army of minions to carry you through the Acts.

Try to fit in a

Phase Run and remember to use your

Quicksilver Flask to move faster through the Campaign.

If you happen to have some extra sockets, add a

Raise Zombie or just a

And with this set-up you’re gonna be ok until Act 10, and if need be, all the way until tier 5 maps.

Since the Passive Skill Tree is mostly the same, with just an Ascendancy change and some currency, you’re gonna be able to transition into my

Arakaali's Fang Occultist without any issues. This is what I’ve done for the past 2 league.

CasualDan is a player that likes to find the path of least resistance. Most of the content he provides is intended for casual players that want to get above average results while spending the least amount of time on set-up. He streams 2-3 days a week at League Start (Twitch), and then usually does mostly Youtube content covering a few builds, a lot of farming strategies and a few gambas.

He streams on Twitch and you can find his Youtube channel here.