Just a few more days and we’re gonna play the Forbidden Sanctum League. This Minion Army Necromancer is a cheap league starter that will enable you to farm tier 16 maps on a budget of around 100 chaos. Fast, deadly, with a lot of quality of life features, 2.5 mil DPS, and 40K EHP, the Minion Army Necromancer is gonna run through maps at 200% movement speed and make bank.

If you’d like to feel like a General of an Undead Army, then try out this league starter and you’re not gonna be disappointed.

Since the Passive Skill Tree is mostly the same, with just an Ascendancy change and some currency, you’re gonna be able to transition into my

Arakaali's Fang Occultist without any issues. This is what I’ve done for the past 2 league.

You can find the Arakaalis Fang Occultist >>here<< .

Below there is one video guide made for Youtube:

✔️ Huge Army of 23 minions without Vaal Summon Skeletons, and with Vaal S.S. a total of 59 minions

❌ Not really a bosser. While an experienced player will be able to defeat all non-uber bosses with this build, for the most part, this is a mapper.

❌ Not for Everyone. This is a minion build after all.

❌ A bit spammy because of the Vaal Summon Skeletons

While mapping this build goes really fast, and the minions are doing all of the work. Summon your Skeletons and watch them destroy everything. When you encounter a tough monster like an Essence for example, summon your Skeletons, your Vaal Summon Skeletons, and curse the enemy with Punishment.

Do the same for map bosses and you’re gonna be ok.

In terms of tier 16 mapping, this build shines in Blight Encounters, since the bosses are gonna be stuck in place when you cast Vaal Summon Skeletons. Add a few Seismic towers and an Empowering tower in the middle and you can comfortably farm tier 16 maps.

To scale damage we’re allocating most of the notables on the tree that give us minion damage, minion attack, and cast speed. For single target, we’re running

For the items try to get a trigger wand with a little bit of minion damage, 2

Ghastly Eye Jewel with Minions deal additional physical damage and you’re good to go. After the first few days of the league when 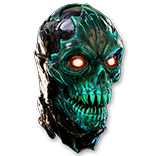 Maw of Mischief goes down in price, add it to the build to make your minions aggressive by default.

The current PoB for this build is always available here:

For help with this build go to our discord and ask for help there. and one of our moderators will help you ASAP: Discord

Although I have used this build to clear the Atlas for the past 3 leagues, in terms of endgame viability, the build is not amazing mostly because it’s quite cheap, at around 100 chaos. This is a transitional build that is gonna allow you to farm your first Divines and then, you’re gonna transition into something stronger.

As mentioned previously, this build shines in Blights, and it can farm Rituals, Shrines, Strongboxes, Essences up to 3 mods (don’t spec into Crystal Lattice if you are in tier 16 maps), Delirium Mirrors, Abysses and also influence on the map device. My recommendation would be to go for Searing Exarch Altars.

6 Mods Essences, King Harbingers, Expeditions and Breach Bosses can be farmed quite easily in white and yellow tier maps.

For the Legions I would at most attempt them in tier 5 maps, mostly because you need some form of explosions or AOE clear to farm them efficiently.

Be careful with Metamorphs, they can be done up to lower yellow tier maps, but don’t go overboard with the map mods and don’t spec into Fine Specimens.

For the leveling we’re gonna explode our way through the campaign by running a lot of minions that detonate and burn the enemies.

Summon Skeletons as a reward. Link it to

Infernal Legion Support which will be available at Nessa at the same time, just after you defeat Brutus.

On your Passive Skill tree, you’re gonna go straight for the Minion Instability Keystone and you’re pretty much ready to blow up your up until act 10.

Once you defeat Fidelitas in Act 2, you’re gonna be able to buy

Summon Skitterbots from Nessa which will be your second

Infernal Legion Support set-up. Now you’re pretty much an Autobomber with the

Summon Skitterbots , but the DPS is not gonna be enough for Rares and Bosses, so you’re gonna have to spam your

Our third Minion set-up is gonna be a

Summon Raging Spirit which is gonna be link to

If you wanna go overboard (I usually do), add some

Raise Zombie and a

Summon Carrion Golem, and you’re gonna have a huge army of minions to carry you through the Acts.

Try to fit in a

Phase Run and remember to use your

Quicksilver Flask to move faster through the Campaign.

If you happen to have some extra sockets, add a

Raise Zombie or just a

And with this set-up you’re gonna be ok until Act 10, and if need be, all the way until tier 5 maps.

CasualDan is a player that likes to find the path of least resistance. Most of the content he provides is intended for casual players that want to get above average results while spending the least amount of time on set-up. He streams 2-3 days a week at League Start (Twitch), and then usually does mostly Youtube content covering a few builds, a lot of farming strategies and a few gambas.

He streams on Twitch and you can find his Youtube channel here.