Elemental Hit catapulted itself to superlative status on its release and has since cemented itself as one of the strongest skills in Path of Exile. Boasting incredible single-target damage, fast clear speeds, high mobility, and the classic feel of playing a bow-build, there are few outright disadvantages to playing this build. By stacking Critical Strike we can melt bosses within seconds — anything that cannot be killed instantly can then be easily kited and safely dealt with.

Deadeye is a really fast Ascendancy, blowing through maps like no other, and keeping a smile on your face the entire time. It provides us with a lot of the things we would otherwise want for as a Critical Strike focused build, such as a huge heaping of Accuracy, as well as naturally boosting our clear speed with Tailwind and Ricochet. Designed for dealing with big and beefy bosses, this build feels really at home ripping up Sirus,

Poorjoy's Asylum, and any boss it can lay its fingers on.

One huge advantage of playing Deadeye versus Ascendant is that League Starting as this build is far easier, especially for less experienced players that are not as adept at quickly generating currency at the launch of the league. Not only is it an Ascendancy well suited to leveling and mapping, but you can also play an entirely different build — such as

Rain of Arrows — until your

Combat Focus (Dexterity and Strength) and

Combat Focus (Strength and Intelligence) Jewels can be acquired. Fortunately, you will never have to wait for very long, as the core items in this build are extremely accessible to players of all budgets. There is virtually infinite room for investments and damage scaling, so players committed to the build or with piles of currency lying around can really kit their exile out and watch as all content bows before them.

Elemental Hit is an extremely heavy scaling skill, meaning that with the right upgrades in the end-game the build can gain hundreds of thousands (sometimes well over a million) of DPS from a single well itemized upgrade.

+ Bow Build has a unique and satisfying style of play

+ Safe DPS — very mobile, great kiting, and does not have to be in melee at all times

+ Satisfying pops when enemies die as

+ Only required items to get rolling are

Combat Focus (Dexterity and Strength) and

– Squishy if you get hit by mechanics or bosses — relies on player skill, mobility, and high movement speed to dodge mechanics

Path of Building data for my build can be found here
.

This is the ideal build for players who like to kite while maintaining full damage output. If you have ever played a MOBA such as League of Legends or Dota 2, your “orb-walking” will be put to great use on this speedy and mobile build. As touched on in the Cons section, a lot of the “Defenses” that we rely on this build are somewhat intangible — the ability to easily kite, high movement speed, flexibility of positioning, high evasion, and life leech. While these feel great in the hands of seasoned players, it does place a great degree of onus on the player to properly leverage the tools that the build puts in your hands. This is the type of build that allows you to easily avoid all the mechanics if you are reacting to them, but will punish you if you are not paying attention and stand in the fire.

Elemental Hit has a really simple and old-fashioned style of play, which we find both relaxing and satisfying. Since we want to incorporate

Elemental Hit links with differing support gems; one for clearing, and another for tearing apart lone targets. This allows for a finer degree of tuning and optimization for each area of the game, ensuring that our clear is as fast as possible without taking away from our boss damage.

Much of the gameplay involves optimizing movement between skill uses, making sure you are never in the same place for more than a moment. While not entirely necessary to see the build succeed, it plays to the strengths of this build and you will find that enemy attacks rarely find their mark. Point Blank does encourage you to stay close to bosses, but for clearing the entire screen should die in a single skill press regardless of your proximity. Far Shot also helps bolster the restrictive nature of Point Blank, allowing you the option of sitting at mid-range on bosses if things start to get hectic.

This build is a great all-rounder, capable of dealing with any content with poise. Mapping is a breeze, bosses bow before you, the Syndicate fall over in an instant, and even you can even Delve several hundred depths before it starts to struggle. This is for players who want to play a bow build with teeth.

This is our recommended Passive Skill Tree.

For more in-depth information on the ordering of skills and details and tricks about the tree be sure to check out our Passive Skill Tree and Gem Links page.

These items strike a balance between power and cost-effectiveness. If you want to explore more options for budget or “GG” gear, see recommendations about Jewels or Flasks, or get more information on alternatives and specialty items, please ensure you read the Gear, Jewels, and Flasks page in its entirety.

For much more detailed information on the best gear, jewels, and flasks to use, be sure to examine our Gear Page in its entirety.

We recommend leveling as

Rain of Arrows, if you plan on leveling as a bow build. Your tree will remain the same, as does your Ascendancy pathing. Try and pick up a

Storm Cloud as it will be leveling far easier. Links are as follows:

Try to pick up some DPS flasks as early as possible, such as the

Which Anointment Should I Use?

Anointments grant the player a high degree of personal choice, so if you find yourself struggling any facet of gameplay in particular you can and should re-evaluate potential options to solve your issue(s). The freedom to take any notable on the tree is a powerful tool that you can utilize in a variety of effective methods. Here are some of our default recommendations:

Why take both Point Blank and Far Shot?

Simply put, it is more damage at virtually all realistic distances. Not only does it improve clear, it also affords a lot more freedom when bossing as you don’t have to be “inside the boss” in order to be at full power. This adds a lot of safety as well as being flat out higher damage in nearly all situations. Finally, there isn’t a compelling alternative to Far Shot that offers comparable damage or utility; it is the best option for damage and utility/comfort.

In order to visualize this interaction better, have a look at this graph: 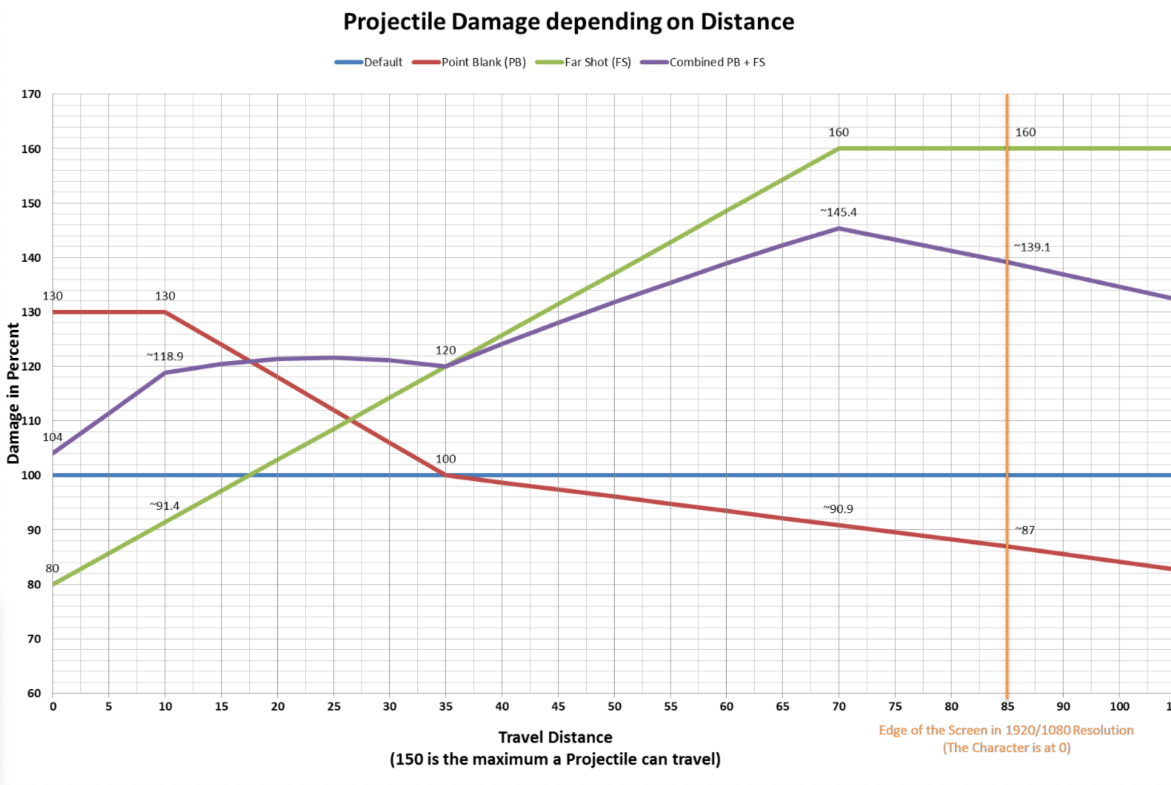 Credit to Guffinn for creating this graph.

How Do I Kill Atziri?

You will need to respec out of Ricochet on your Ascendancy tree to avoid dying to the mirror clone if you plan on farming Atziri.

Why Don’t You Recommend

The amount of points invested actually result in a slight DPS loss, assuming you can fill the Jewel slot with a strong candidate. Since

Lioneye's Fall is an expensive investment, you should be able to acquire a better Jewel for less.

Generally speaking, Fire offers the best damage, is the easiest to facilitate, and has the best interactions with Unique items. Cold Based

Elemental Hit is much better for Delving, however, it is at the expense of a noticeable amount of damage and bossing ability. We feel this trade-off is not worth it.

I have no clue how, but it sure beefed up damage with that focus.
You mean I should switch weapon for clearing and switch back chin sol for single target? Or just keep the single target gem setup in chin sol?

Thanks a lot for your time.

It’s a little complicated before you fully understand how

Elemental Hit conversion and scaling works (you don’t need to understand it either, it’s mostly academic as long as you follow the recommendations).

To explain it very simply:

Combat Focus (Strength and Intelligence) socketed, you were dealing zero damage 33% of the time. Whenever

Elemental Hit chose cold, you dealt only Fire damage, but

Elemental Hit only deals damage of the chosen element.

Check out the other pages of the guide for additional information: