This guide will teach you how to craft a generic, jack of all trades minion wand to last you on your journey through Path Of Exile : Sentinel , and beyond.

This craft can be simulated in Craft Of Exile to see the exact odds of hitting each of the steps, you can use this information alongside market prices to calculate average investment of crafting an item. Making sure you have enough currency to finish a craft is often recommended.

Our finished item will have the following prefixes:

Our Suffixes are as follows:

As you will see below, forcing the prefixes and Trigger is extremely easy if we’re willing to settle on not having it come from an unveil, the overall difference in damage is not going to be worth the cost & effort to achieve the perfect suffixes unless you have at least Tier 2-1 “Minions deal #% increased Damage “ on the Prefix, especially in the case of crafting for profit. 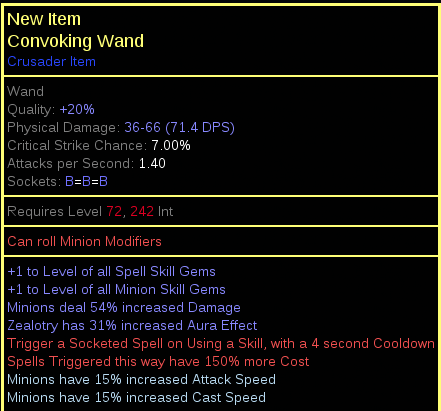 To roll Minion Modifiers more commonly we really want a

Convoking Wand, there is no real room for compromise there unfortunately, as its implicit allows it to roll the modifiers we’re looking for.

Our highest Item level modifier is going to be 84, for 75-79% increased Minion damage, so it is advised to go for this in case you manage to hit the T1 modifier. 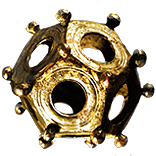 Prime Chaotic Resonator or its Alchemical equivalent with

Metallic Fossils to force the prefixes

This on average takes around 10-12 tries depending on luck to force the Gem Level modifiers, hitting a minion damage prefix is roughly 1/33, getting progressively rarer as you go up in tier.

This is quite literally all it takes to force the prefixes we would like, and after we’ve completed this step we can move on to the suffixes.

At this point, our item can have any variety of suffixes, and none of them really matter. If we have an open suffix to craft on, we will bench craft “Prefixes Cannot Be changed” followed by a

Veiled Chaos Orb to add a veiled suffix. If this isn’t the case, we will use Harvest’s “Reforge a Rare Item keeping all Prefixes” until we find an open suffix.

At this point, we can simply craft “trigger socketed spells” and be done with the wand, if you wish to continue with the other suffixes, this can cost a lot and is only ever worth it with a Tier 1-2 “Minions deal #% increased Damage “.

If we’ve decided to keep going, using the veiled orb is going to be our next step, it can be an expensive gamble and to minimize this risk we can craft the suffix “Chaos Damage Over Time Multiplier” thereby diluting the potential mod pool, if we have the open suffix with a veiled modifier. From the unveil we are really hoping for the trigger craft, and if we hit it we are basically 90% of the way there. If we unfortunately do not hit it, we can either repeat this process, or cut our losses and move on.

A major point of contention with doing this is that even upon hitting the Trigger craft, you are locked out of other suffixes as they are full. If you are fine with the way your wand turned out, you can stop at this point, continuing will involve repeatedly forcing this cycle until we hit Trigger with 1 or 2 open suffixes.

In the best case scenario of 2 open suffixes, our item will look a little like this: 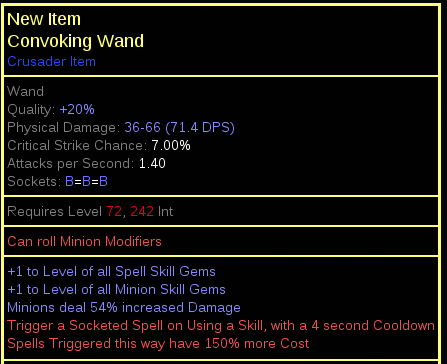 If your Wand has only 1 open suffix after hitting the unveil, you may simply craft the Minion Attack Speed straight from the crafting bench, if we have two Suffixes then our best bet is to craft “(3-4)% Increased Damage per Power Charge”, and using a

Crusader's Exalted Orb in hopes of hitting the Zealotry aura effect. This part isn’t too expensive, though prices may vary depending on the state of the league, and even if it doesn’t hit it we can still craft the aforementioned Minion Attack Speed.

As much as I love making guides, it is very crucial in a game like Path of Exile that you play the game the way you enjoy playing it. This guide merely describes the most effective approach to crafting the +2 Minion Wand, and even if you decide to go about it differently, we are all just trying to have fun and there is nothing inherently wrong with that at all.