Headhunter provides a significant boost to all aspects of a player’s abilities and defences when used in high budget builds purely focused on obliterating entire maps with either very powerful or insanely high cast/attack rates. Most commonly known to be used with Magic Find builds due to the fact that they sacrifice a lot of defences for Increased Item Quantity and Rarity to steal rare mob’s defensive modifiers. Other builds that use Attacks generally benefit more over casters due to the available mod pool monsters have available to them (this is subject to change with 3.20 due to the changes away from Archnemesis mods and clearer mod descriptions per GGG). Though it is a solid option for nearly every build out there, there are some that do not necessarily work well with Headhunter. 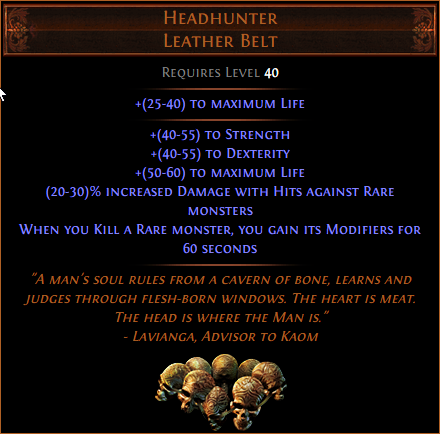 So, with Headhunter, there are some basic things we want to do and others we want to avoid. We will start with the things we want to avoid. First and foremost, we DO NOT want to set a low expectation that we will get one to drop. Headhunter has been a coveted chase item since its introduction to Path of Exile in 1.0.0. The counterargument to this is that we can focus on farming a Headhunter by running specific maps looking to drop either The Doctor, The Nurse, or the Patient divination cards. If you want one there are ways other than getting multiple divine drops to buy one outright.

We also DO NOT want to assume that a HH (headhunter) will solve all our problems with a build. HH is great for bolstering a build but will not single handedly fix any issues. If we look at the belt objectively, it provides a max of 122 life, 55 Dex, and a situational damage buff against rare mobs (before we stack up modifiers). Headhunter can easily be replaced by a rare belt or even a Stygian Vise with decent rolled Abyss jewels. We lose a lot of available and beneficial mods to sort our resistances and life/energy shield if we are lacking. We DO want to sort all of our gear prior to putting on HH to ensure we are not missing any necessary defences, the damage increases, or build enabling items. HH should be the last item we sort out unless we get extremely lucky on drops.

A very good thing to DO is to find a build that can work before having a HH. The reason behind this is that we want to encourage new players and veterans alike to follow this advice is because WE WANT TO PLAY THE GAME! Especially if you able to play the league start, we want to progress and build some wealth during our hunt for the belt. We DO NOT want to find a Tornado Shot MF build that has a budget of 20398465 divines, being carried through the acts just to get to maps and level 100 to get that last attribute node on the passive tree just to equip that last item or skill gem, then league start it then realize the build is not functional without being able to steal the mods to do enough damage to kill mobs or dying due to being looked at by a white mob skeleton archer. 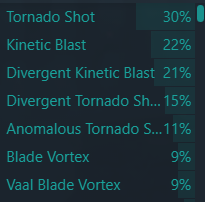 Though previously mentioned as a build not to use at a league start, this build concept maximizes the damage modifiers of mobs and generally heavily relies on killing mobs 1-2 screens away to stack up the defensive mods for survivability. This is generally the #1 build type that uses HH.

Another high clear speed build type that wants to go zoom zoom all day. Works well with increased projectile count, chain and fork due to KB explosions happening at every point of impact on mobs or objects/walls. The damage won’t appear to be in the millions, but if we account for the high attack rate, projectile count, and all the chains and forks, clearing 1-3 screens away with ease.

Making use of hexes, Asphyxia’s Wrath, and Power charge stacking, you have a diabolical dive-bombing build taking advantage of a similar playstyle as the walking loot simulators RF and Death’s Oath.

There are so many LS builds out there that all can take advantage of the perks provided by HH.

At the end of the day, pretty much any build that hits really maximizes HH very well while other builds that use degen/damage over time aspects require a bit more investment but can still make good use of the belt. The only builds that those of us at PoE Vault would say SHOULD NOT attempt to make use of a HH are Righteous Fire, Death’s Oath, or minion builds, as they do not make use of the damage modifiers generally carried by rare mobs, the only exception is if you gain an aura from a rare mob, then the minions you have would benefit from the aura as well.

How to Obtain a Headhunter

So, we have a really 2 ways of getting a HH. The first is the most obvious, which is purchasing one. At the end of the Kalandra league, there are 25 listed (the date being 18/11/2022 when checking the trade site), and the cheapest is 120 divines. Now that isn’t an insane amount, but for most, that is an unlikely route without getting early good drops to fund early currency generating strategies such as flipping, profit crafting, or carries.

The more likely way to obtain a HH is by farming the divination cards. All 3 cards can drop from Stacked Decks. The most likely to drop off the 3 cards is The Patient. These can be target farmed in the following maps: Armory, Arsenal, Colonnade, and Promenade. If you target farm these cards, it will take 512 cards to get 1 HH. The second card is The Nurse, and 8 Patient cards turn into 1 The Nurse Card. The Nurse card drops rather infrequently, but not as difficult as dropping The Doctor or a HH. These cards can be found in the following maps: Cells, Core, and Tower. The last card is called The Doctor and it takes 8 Nurse cards to get 1 Doctor card. It takes 8 Doctor cards for us to get a HH. These cards can be found in 2 maps, Burial Chambers and Spider Forest.

We hope you have found this to be helpful and we wish you the best of luck in farming your very own Headhunter! One small word of advice to leave you with is that once you try Headhunter it may be more difficult to go back and play a non-Headhunter build but also that Headhunter playstyles aren’t for everyone. Good luck out there Exiles!