Hideouts were added to the game alongside the Forsaken Masters mini-expansion. This is a period of the game I remember with almost crystal clarity, as accompanying leagues were Rampage and Beyond, and the latter went on to become one of my favorite and most played leagues ever. While Hideouts did not offer the exhaustive amount of vanity options and customization that they do in the current era of Path of Exile, every player could agree that it felt downright awesome to have your own home base.

One of the greatest aspects of Hideouts is the amount of style and flair that the player can imbue them with. There are hundreds of decorations, and many of them have multiple variants, resulting in thousands and thousands of different possibilities for you to experiment with.

Once you have reached the end-game, your Hideout will serve as the main hub for the majority of end-game activity, the main exceptions being the Azurite Mine and the Labyrinth. Most everything else can be found and accessed from the Hideout itself, such as end-game Mapping, The Temple of Atzoatl, Immortal Syndicate hideouts, the Crafting Bench, your personal and guild stashes, and more.

In this guide we will explore a few of the fundamentals of hideouts, such as how to obtain the differing variants, acquiring decorations, and essentials to incorporate.

If it is your first time playing Path of Exile, you will have the opportunity to unlock and create your first Hideout in Act II. Once you rescue Helena from the Chamber of Sins she will allow you to select your own Hideout.
Helena is the hub for all things related to your hideout — if you acquire new Hideouts, you can change swap them as you wish by speaking with her. Helena, and all other Masters such as Zana or Niko, can be invited to your Hideout for convenience or for decoration should you desire.

Your Hideout can be visited any time from a Waypoint. One of the unique advantages of Hideouts over Cities is that skills are usable within them, and auras are enabled. This allows you to get live previews of changes to tooltip DPS when you swap out gear or gem links, which is a true quality of life bonus.

Not only is your own hideout an essential part of the game, but players that choose to play on trade leagues will spend a fair amount of time visiting the hideouts of other players as well. Virtually all trade is conducted within the hideout of the seller — when you join a party to buy an item, it is common trade etiquette as a buyer to enter the seller’s hideout and wait for them to trade you. 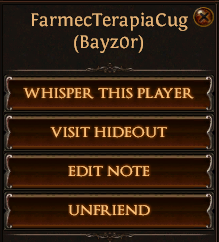 To enter the hideout of party members or friends, simply right click on their frame in-game and select Visit Hideout. You can also adjust the permissions for your own hideout by pressing the “Decorations” button at the buttom of the screen.

Players who add you as friends can visit your hideout, even if you have not accepted their friend request (and vice-versa). This is commonly done when trading

Perandus Coins, as inviting players to your party while Cadiro Perandus has a good offer in one of your Maps often results in the seller enter the map and stealing your item. Using this trick, you can initiate a trade without being in a party.

There are over sixteen different hideouts available in-game, and several more that can be purchased from the microtransaction store. Certain hideouts can only be unlocked in specific areas of the game, and the level of rarity varies depending on the hideout in question. When you encounter a hideout in-game the entrance is marked with a blue fleur de lis on your map and mini map. Enter and clear the hideout of monsters to unlock the tileset. Once you have unlocked a hideout tileset it is yours in perpetuity, persisting across all characters and all leagues. 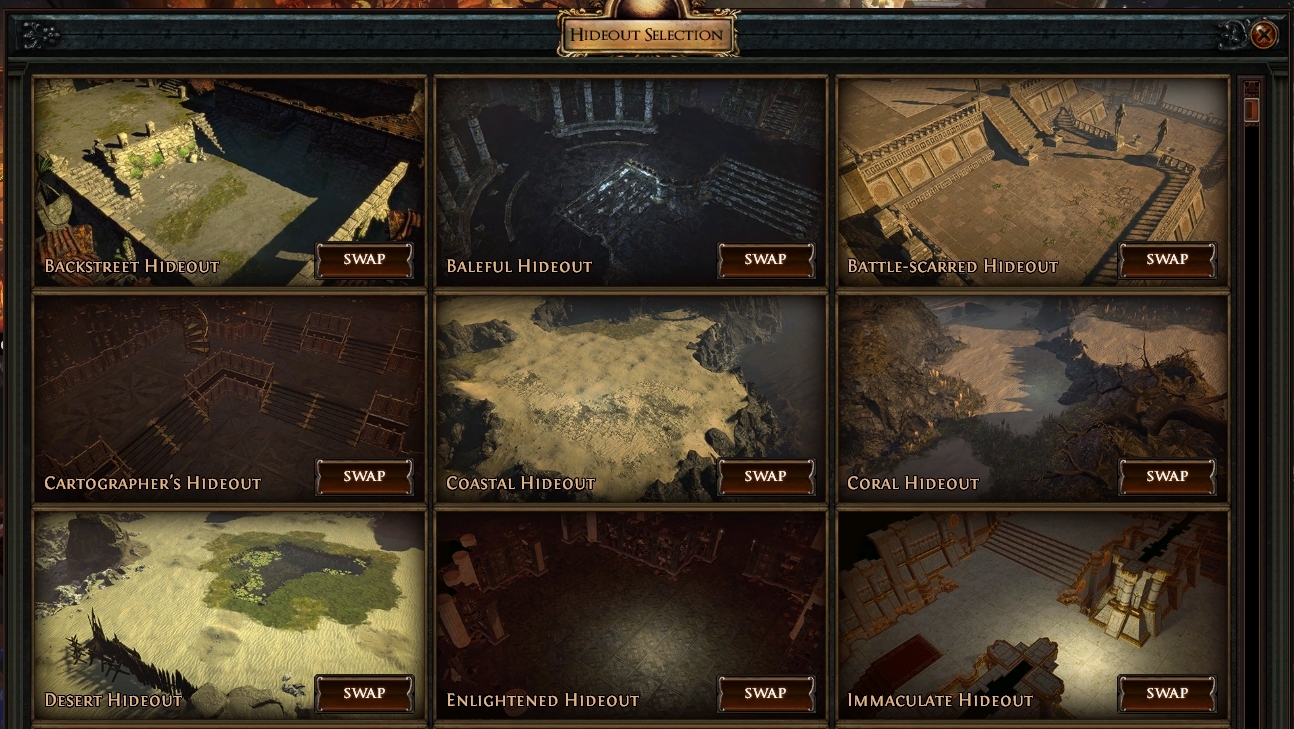 Here is an alphabetical list of the currently attainable hideout variants and their locations of acquisition:

The Rare tilesets are typically acquired from high tier Maps, while many of the Common tilesets can be obtained while leveling and throughout the main story. While there is no official data on the frequency of hideout spawns, “Common” hideouts are either guaranteed to appear in the listed zone or can usually be obtained within several runs through the area. “Rare” hideouts, on the other hand, often taken tens and sometimes hundreds of runs before they are encountered, though it is known that the spawn rates vary depending on the hideout in question.

Completing Master Missions earns Favour with the masters, and Atlas Objectives reward bonus Favour. Interact with a Master in your hideout to purchase decorations from them in exchange for Favour. The Favour currency is account wide and carries across all leagues (no separation between Softcore, Hardcore, and SSF), as do any decorations you purchase with it. 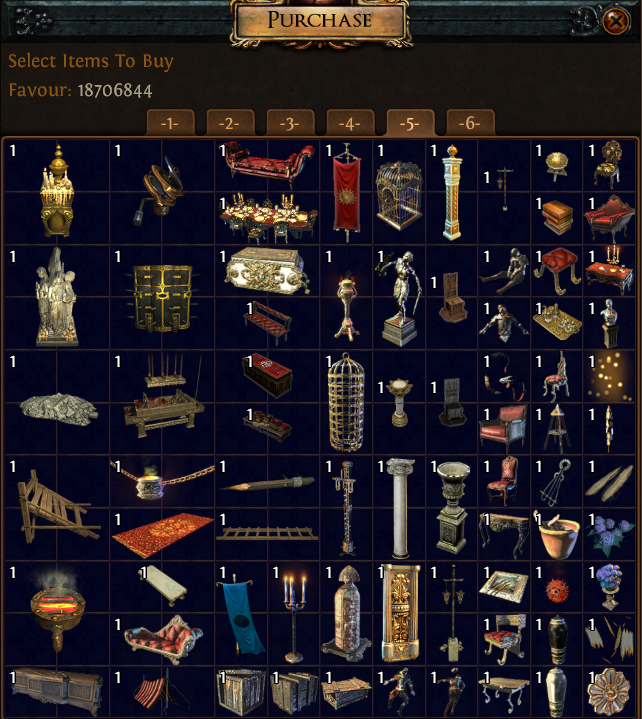 A large number of decorations in Path of Exile have multiple variants that you can select from to give your aesthetic a little more variety. You can see the number of variants a decoration has before purchasing it simply by mousing over the item.

After placing the decoration, simply scroll your mousewheel while hovering over the center of the yellow circle to preview the different variants before deciding on your choice. Decorations can be changed at any time to any variant, so there is no pressure and experimentation is encouraged.

Hideouts are ultimately an expression of self, and targeted advice on how to set up your hideout for you is not possible. One of the recent features introduced, however, is the ability to import and export your own and others’ hideouts, providing you have the appropriate decorations.

Some players go to amazing extremes to create effects that hardly seem possible when previewing the decorations individually. This is usually done by overlaying several different decorations, or lighting effects, to create new pseudo-textures. Certain combinations of decorations may look radically different than when they are placed side by side. 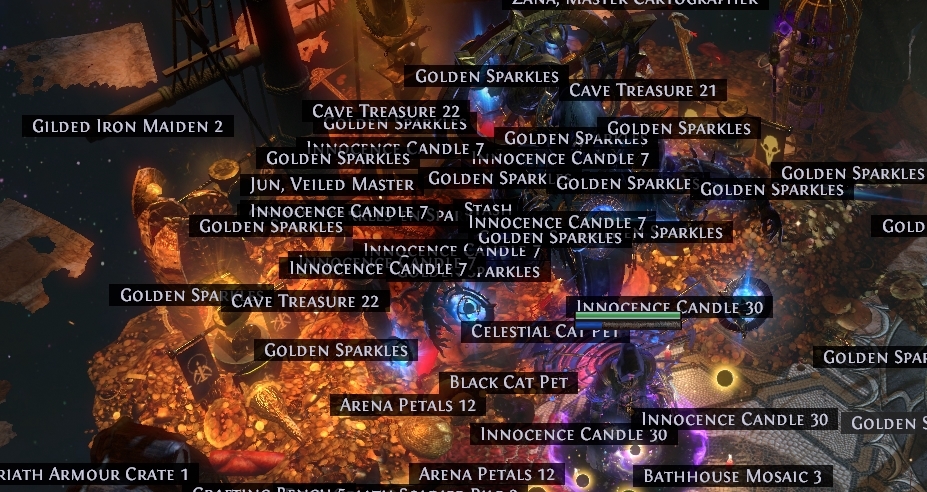 While overlaying decoration upon decoration can get very confusing while editing, some of the effects you can create are truly sublime. The main limits are the level of time you are willing to invest and your imagination!

Hideouts are an essential piece of the game, even from a purely pragmatic perspective. They function as the central end-game hub for mapping, trade between players, the masters within the game, and more.

While your hideout is essential to practical success within Path of Exile, it can also be used as a means of freedom of expression and creativity. Since you spend so much time in your hideout, many players love to spruce it up with something they find awesome, or to show off for friends and prospective buyers.

Good luck experimenting with your hideout, and feel free to share any pictures of your handiwork in the comments below!