Molten Strike is a skill that likes to stand and deliver. By stacking extreme amounts of Attack Speed and bonus projectiles,

Molten Strike can melt through bosses like a hot knife through butter. To back up our potent single target, Juggernauts are an immovable object that can face tank virtually everything. With 90% Physical Damage reduction, increased maximum Resistances via

Loreweave, heaps of Chaos Resistance from our dual

Nebulochs, and powerful Life Regeneration and Life Leech, this build isn’t afraid to take a beating as it dishes out its damage.

– Clear speed is below S-Tier Mappers, especially in open environments

Path of Building data for this build can be found here.

Included in the Path of Building are skill trees, all gem links and possible variations, and an example set of gear with room for upgrades. For simplicity’s sake, Elemental Resistances are not included on gear, and you can fill them in as you like depending on available gear.

Molten Strike Juggernaut can land in the middle of any pack without fear, instantly removing all nearby enemies with just a swing or two. Layers of defensive mitigation will gives this build the confidence to play with extreme aggression, allowing the player the freedom to tank many mechanics in order to dish out more damage. For example, bosses such as the one in

Maze of the Minotaur Map can be easily tanked without any issues. Both Endurance Charges and Frenzy charges — via

Blood Rage — are utilized to further empower the build as it

Leap Slams around the area.

An easy way to counter

Nebuloch‘s degeneration effect is by using two of the

Kaom's Way rings. With decent end-game gear, this build has plenty of surplus regeneration to deal with incoming damage. Add some Life Leech on top of that and any damage that is slipping past our defenses is being instantly negated, adding further cushion to play with.

For more details on the Passive Tree, an earlier game version, skill acquisition order, and more, be sure to check out the Passive Skill Tree section for in-depth information.

This build utilizes Cluster Jewels and is also heavily reliant on standard jewels to scale damage, so it is highly recommended you thoroughly read the Gear, Jewels, and Flasks section.

The Molten Strike Juggernaut can be leveled with its signature skill since level 1.

Tabula Rasa are extremely useful leveling items if you have access to them, and can make the leveling experience one of the smoothest available.

Here is an example of the early skill tree. Pick up the Jewel socket as soon as possible so you can socket in your threshold Jewel, which will make

Molten Strike that much stronger. Then go for Iron Grip and Point Blank, these two keystone notables will immensely increase your damage.

Goldrim provides a lot of elemental resistances, this will let you worry less about gearing when approaching certain Act encounters. Dual-wielding two 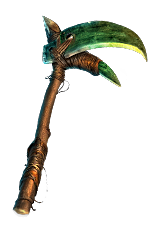 The Screaming Eagle axes will carry you up to level 28, when you can equip

In order to acquire gems that are not available to your class as a quest reward, simply ask a friend to buy them off vendors for you, or buy them yourself from Siosa in The Library in Act III Library.

Ancestral Protector for additional single target damage. At this point your

Herald of Ash for additional damage.

Ancestral Cry is the Warcry you should start using all the time at this point.

Brutus' Lead Sprinkler equipped and you ascend into Unflinching, you can replace

I cannot sustain the burn from two

Nebuloch maces since I do not have the rings yet, but the damage with

Brutus' Lead Sprinkler sucks for maps, what should I do?

Kaom's Way. Use a rare shield with life and resistances.

What Anoint should we go for?

Divine Judgement is a solid damage boost. If you are not using

Loreweave you can also go for Anointed Flesh.

The Molten Strike Juggernaut is a top-tier endgame boss killer. There are very few other builds that can achieve this amount of damage mitigation while also having the damage to bring down the toughest bosses the game has to offer.