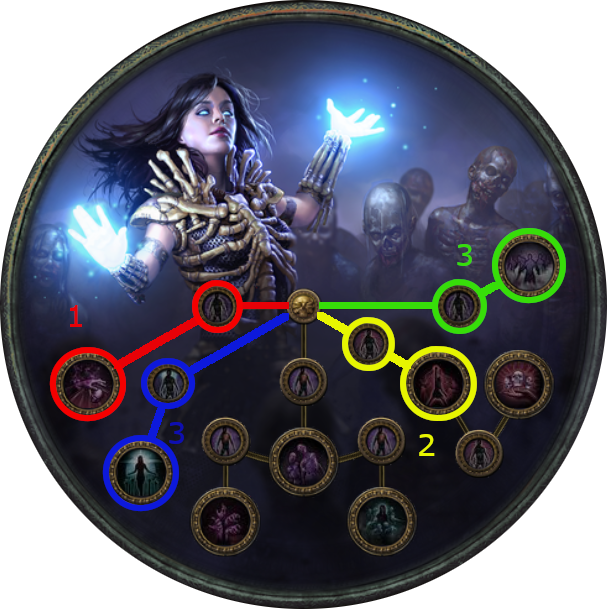 Commander of Darkness is an incredibly powerful node to pick up that early in the game. It’ll almost guarantee you Resistance cap until the very late stages of the game whilst providing a reasonable 12% Attack Speed to your Damage Dealer.

10% More Damage dealt and 10% Less Damage taken is certainly not something to sniff at. Given we’ll be picking this up late in Act 8 or early Act 9, I feel like getting your group some safety and making sure everything dies smoothly is really nice. It is, however, possible that later on in the game your DPS will be shattering everything and there’ll be no corpses around.

Mistress of Sacrifice enables us to run a

Bone Offering to give us some nice chance to block both attacks and spells. On top of that it is a vital part in the puzzle to keep

Vaal Grace up as long and as much as possible to secure the safety of the group. Disclaimer: if you recognize that your

Bone Offering doesn’t reliably get to consume a corpse because of mobs getting shattered, you can try to free up a link in the

Cast when Damage Taken Support for a

Desecrate to get this to work more reliably.

Really just the best of the rest option. If your Damage Dealer somehow doesn’t shatter everything at this point, you might be able to get some random Energy Shield regeneration off of it and proc your Bone Offering to give you the extra 8% Energy Shield regen. Mostly, it’s just a very circumstantial thing with a lack of better things to pick.

Deal with the Bandits

There really only is one option here. You require none of their benefits so we should be killing all three of them for additional skillpoints off of Eramir

Presence of Chayula or an

Eye of Chayula your only real option is Soul of the Brine King.

After swapping to one of these amulets, Soul of Lunaris is your pick. You’re already relatively tanky versus incoming Chaos damage and Physical damage is what gets to you the most.

This one is an easy pick for every Low-Life character in the game. Soul of Abberath gives you Burning ground immunity and is impossible to pass up. Given that you’re focused around our Energy Shield recharging, which gets stopped by Burning Ground, it is nigh impossible to play without it. It should, at least, be allocated when you transition into Low-Life.