This Ritual league guide aims to teach you how to properly slaughter, destroy and, mostly importantly, sacrifice your adversaries to obtain the best possible rewards in Path of Exile’s 3.13 challenge league!

In Path of Exile: Ritual (3.13), Grinding Gear Games is giving players back what the aRPG genre has always been known for: unadulterated slaughter.

Twisted spires of flesh, blood and sinew now stand scattered across Wraeclast’s landscape. Their origins and purposes unknown, they seemingly have a hunger for blood and death and are willing to richly reward those who can sate it.

Ritual is what is known as a “combat league”. It features combat as its primary mechanic and does little else, besides spawning tons and tons of monsters. Inside of each map, you encounter multiple (up to 4 per map) shrines, with a large ritual circle around them.

Kill all the monsters inside the circle in order to satiate the shrine’s basic requirements, in order to interact with it. Simply walk up and click on it to activate the wave-defend-style Ritual mechanic. Waves of monsters will spawn around the shrine and attempt to defeat you, while all you do is slaughter them inside the circle. You are unable to leave the ritual circle once the ritual has started, so make sure you’re ready for a fight before you touch the shrine itself. 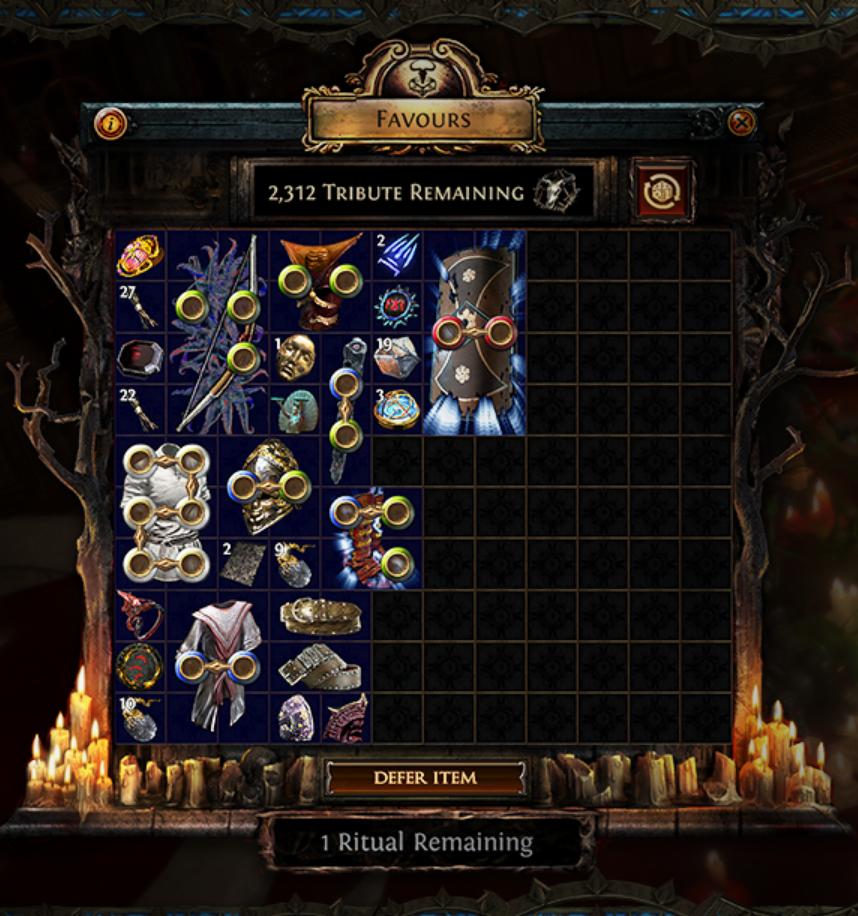 Fighting and sacrificing monsters during the ritual, by simply slaying them inside the ritual circle, will yield a new instanced currency, called “Tribute”. This currency does not transfer between maps and, as such, is best used on a map-to-map basis. The more monsters are killed, the more Tribute is gained.

After defeating all the monsters of any given shrine, you can open its Favours interface, which functions as a shop, with random reward items for you to buy. 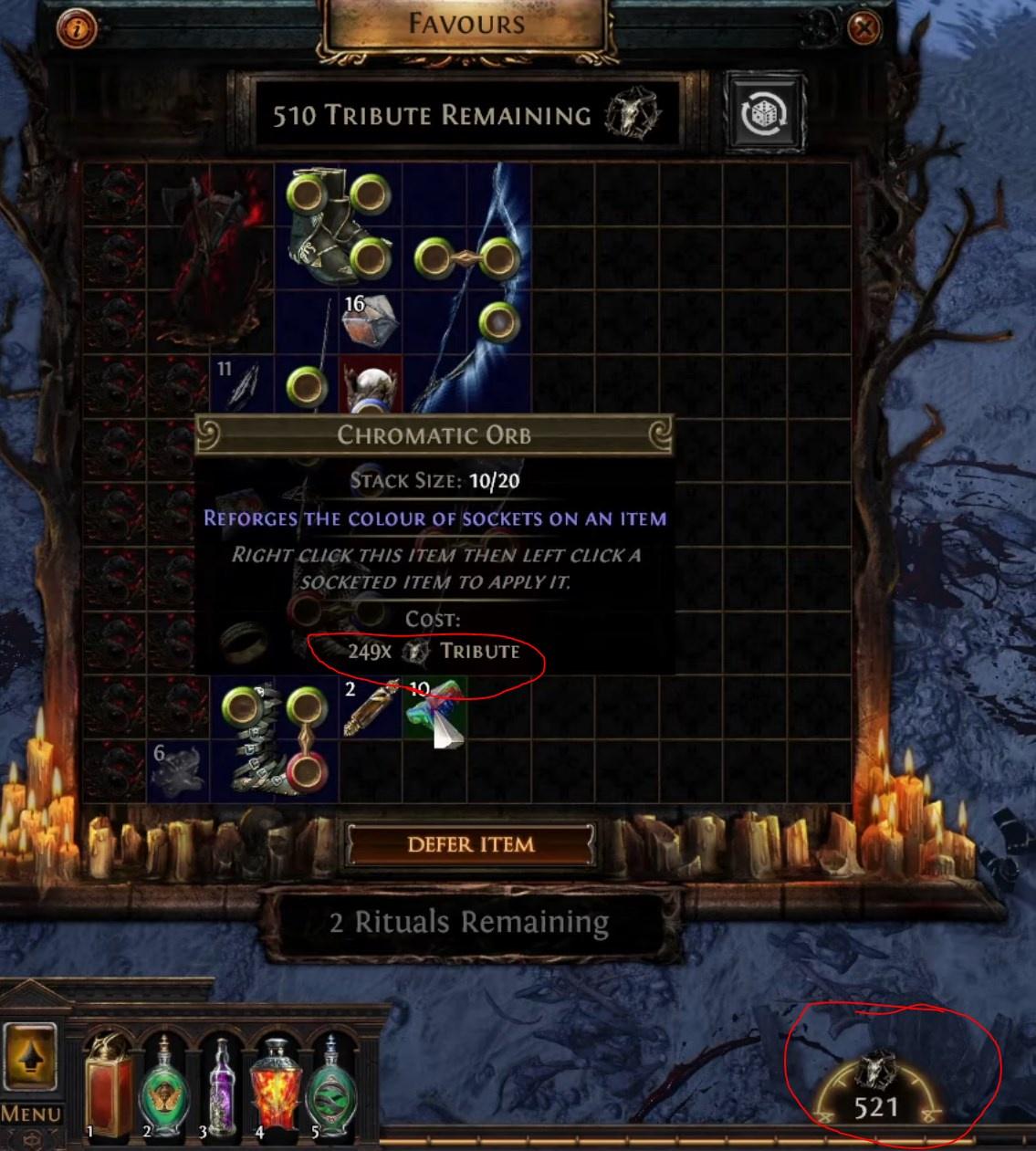 If there is an item that exceeds your current total of Tribute acquired, you can “defer” it to a later ritual, by paying a small fee (20% of the item’s price in Tribute). This will GUARANTEE that this item will show up in future rituals (of the same map) with a reduced price, allowing you to essentially rate-pay it off over the course of the instance. You may also pay a small fee to re-roll the entire contents of the reward shop ONCE per instance. This makes sure that every player can always find at least SOMETHING worthwhile, while sacrificing monsters to their hearts’ content.

Speaking about something worthwhile: one of the new rewards for participating in the slaughter are Ritual-specific base items. It is unclear how many different types there are, but here are three of them, to give you a rough idea of what you can expect to obtain in this league: 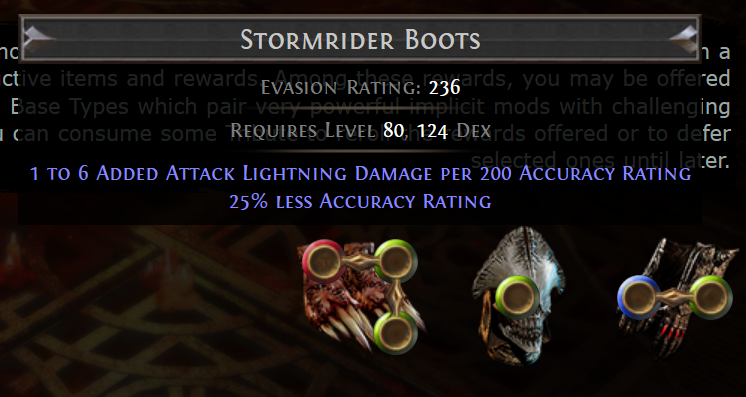 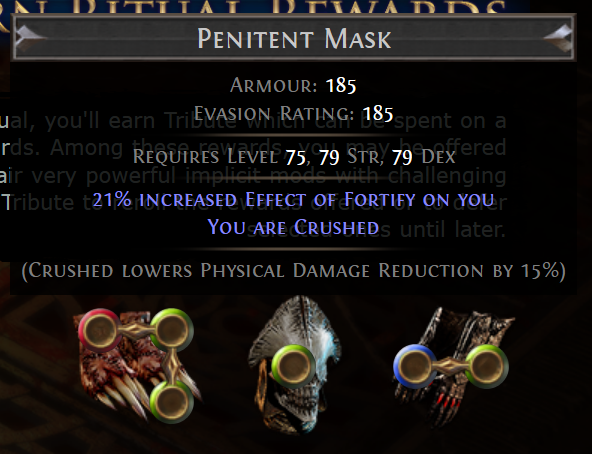 Lastly, to add some extra longevity and scalability to the league mechanic, you sometimes (rarely) encounter items known as “Ritual Vessels”, which allow you to store the entirety of the monsters spawned by any one shrine (after you’ve beaten it) into an item for later use. This item can then be used together with a map in your map device (up to four of these vessels can be used on any one map), to drastically increase the monster density and quantity in the map, while also adding these monsters towards the shrines in that map as well. 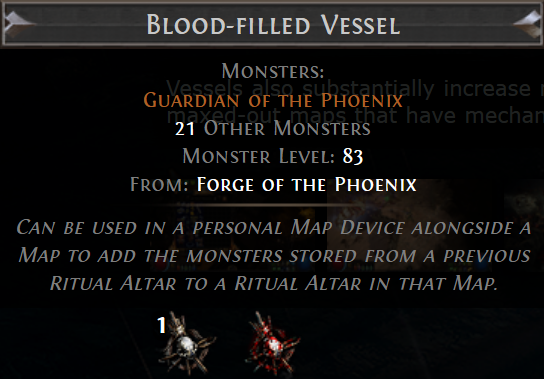 Be advised that this WILL result in a large spike in difficulty (and, of course, rewards) for a lot of players, so act with caution if you intend on using these vessels early on in your character’s career.

While the Ritual league mechanic does not seem extremely complicated, there are likely going to be some high-end strategies to maximize the rewards and obtain the correct items, once the league has released. Those strategies and tips will be covered in this section. Feel free to leave a comment down below, if you have some strategies or tips that are not covered in this guide.

The Ritual league mechanic seems to aim to bring back a bit more of an old-school feeling to the world of Wraeclast, with a simple, yet enjoyable kill-focused league.

In addition to the Echoes of the Atlas expansion, 3.13 is primed to be one of the most enjoyable experiences in Path of Exile in recent memory.

Echoes of the Atlas will launch together with the Ritual challenge league on January 15th for PC, and on January 20th for Consoles.