What is The Forbidden Sanctum League in PoE?

In Path of Exile: The Forbidden Sanctum, you will test your resolve as you make your way through the Sanctum’s dangerous halls. In the Sanctum, each decision you make can cost you greatly.

The Path of Exile December expansion introduces the Sanctum challenge league with the following:

When will The Forbidden Sanctum 3.20 League Launch?

You will be able to experience the new Path of Exile: The Forbidden Sanctum 3.20 on December 9th (PST) for PC and Mac, and on December 14th for Xbox and PlayStation.

What is the The Forbidden Sanctum League Mechanic?

In The Forbidden Sanctum league, we will discover The Forbidden Sanctum which is an ancient Templar enclave hidden beneath the Fellshrine Ruins. Abandoned for a long time, it is now controlled by a malevolent entity. You must explore it, uncover its secrets, and deal with the evil that lurks within.

Upon entering the Sanctum, we will uncover a map that reveals a few of the rooms ahead of you. Sparse details of the room and its rewards are shown, so you must plan carefully as each mistake will dwindle your resolve. When your resolve runs out, your Sanctum run ends. Each time you enter the Sanctum, you will seek to push yourself further than before through its four floors. 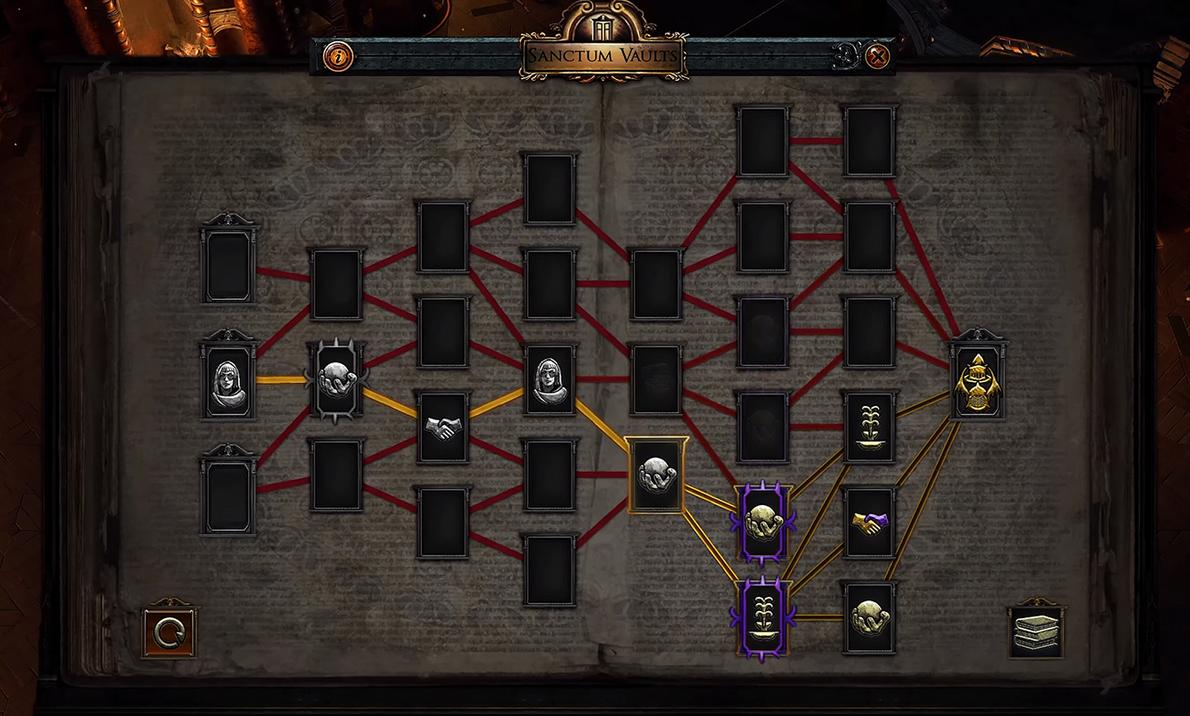 The Forbidden Sanctum rooms have many secrets. They can contain ancient fountains where you can rest to restore a portion of your resolve. Other rooms can curse you with an affliction and will hold your progress up. The afflictions will stack the deeper you explore the sanctum. Besides the negative effects you can also receive boons, these are blessings that help you overcome the dangers that the Sanctum throws at you. The layout of the Sanctum will be unique every time you enter so your journey will never be the same. 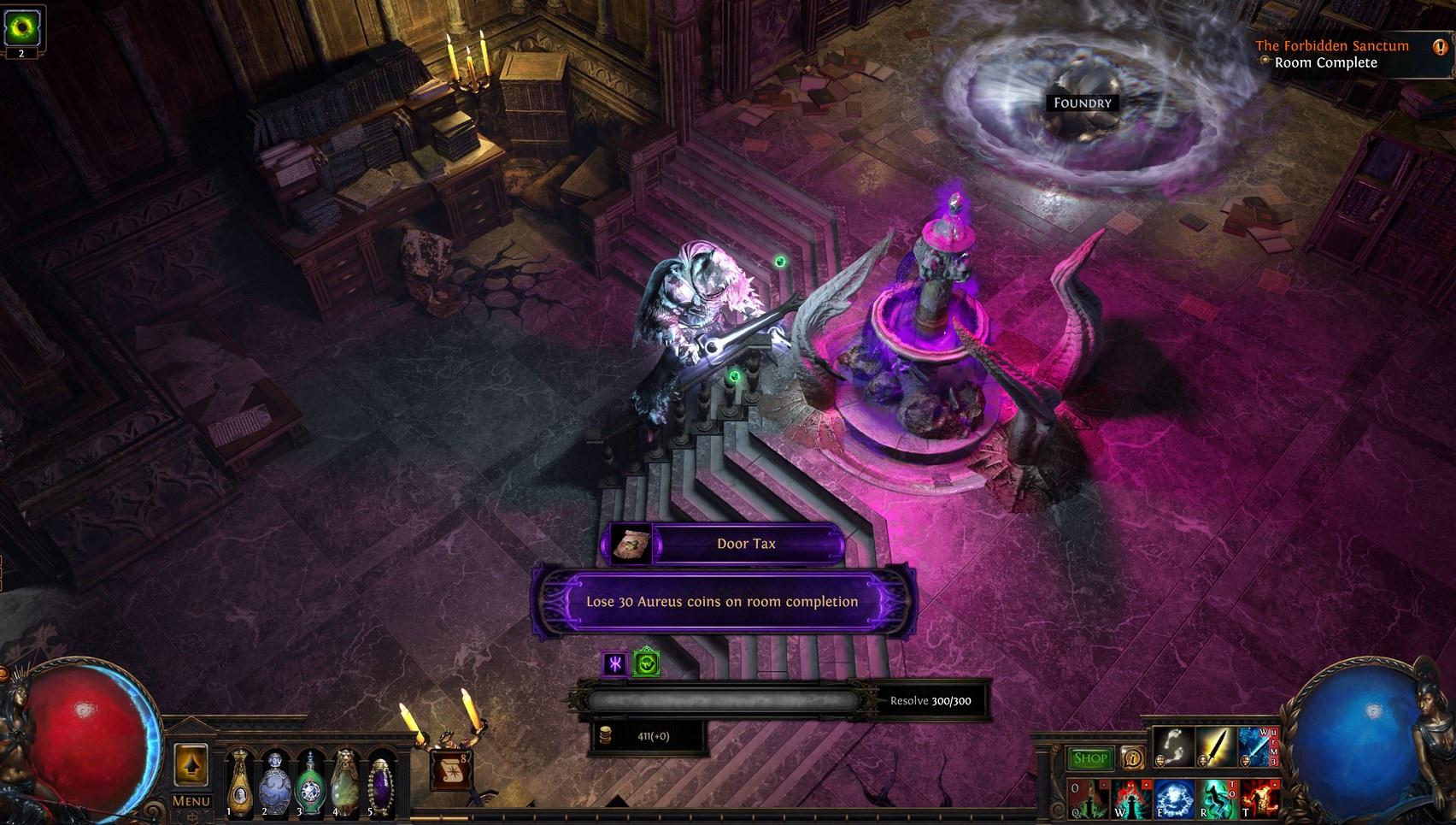 Currency You Find Inside The Sanctum

When you are inside the Sanctum you can find gold coins called Aureus. This is a currency that the Templars used for commerce. It will be stored in a treasure chest and drops from monsters you kill. These coins belong to the Sanctum and will not be able to leave it like all the other currencies we know in Path of Exile. Inside the Sanctum, you can trade the gold coins with a merchant you may run into from time. Make sure you spend your Aureus wisely as it can be used to get a good boon that you might need. 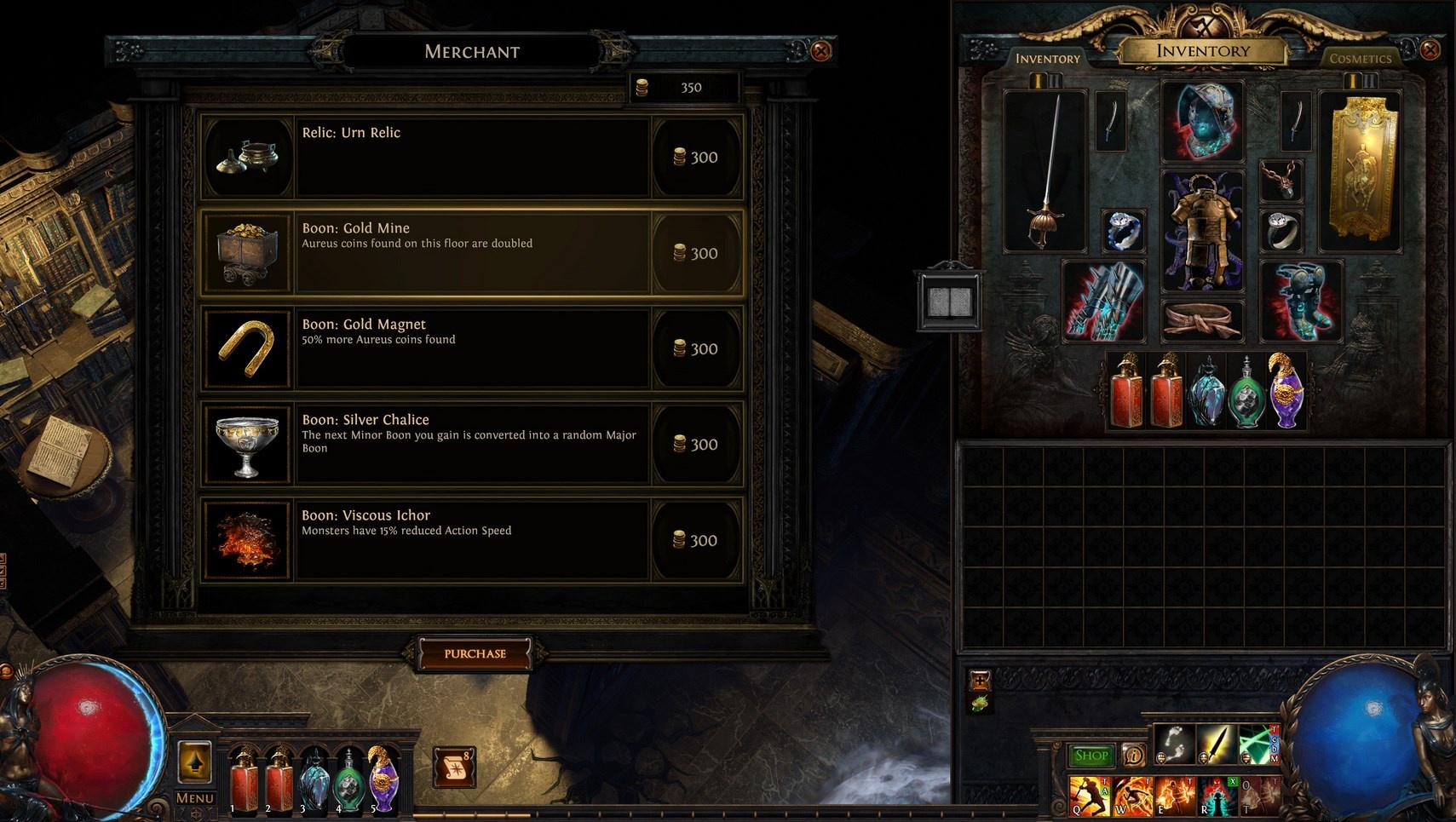 While exploring the Sanctum the sinister powers will occasionally offer you an Accursed Pact. These benefits will be powerful but they come with a dangerous price to pay. The Accursed Pact will be very tempting but you must choose with care. If you make the wrong choice it could mean the end of your time in the Sanctum or if you make the right choice you will be successful. 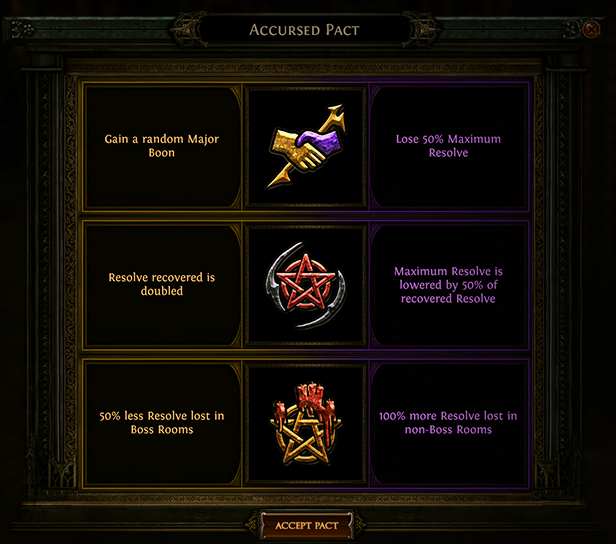 A lot of rooms in The Forbidden Sanctum will have a currency choice on offer. You have the option to take the reward or leave it behind for later as an investment for an even bigger reward. Postponing your reward to the end of the current floor or to the end of the entire Sanctum escalates it with a greater risk. You could run out of resolve before making it to the end goal and lose everything you gambled. This means you have to decide some tough choices and be sure the risk-reward will pay off. You can always play it safe and leave with what you earned at that point. 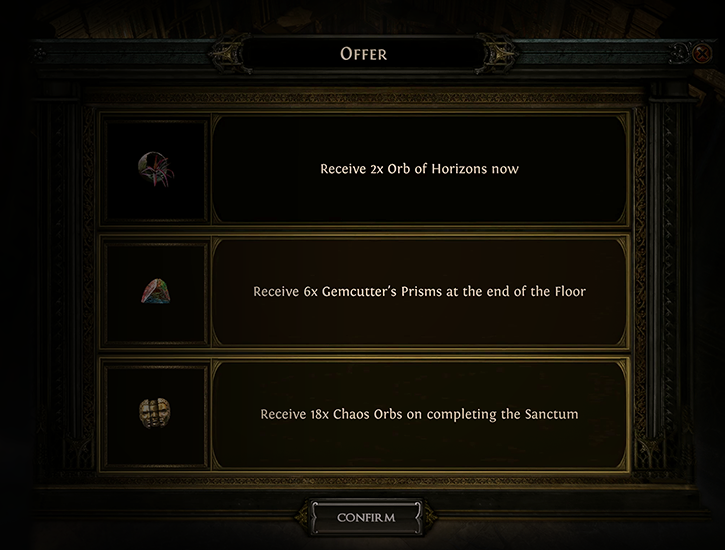 When you explore the Sanctum you will discover a special altar where you can place Templar Relics on. These Relics will make you way more powerful on your Sanctum runs and they will be present every run. They are the key to acquiring more power the deeper you go into the Sanctum’s Vault. Over time you will find more relics and you will need to make decisions about which ones will benefit you the most when you arrange your Altar.

Besides Templar Relics you can also discover Sanctified Relics, they are a very rare type of relics that affect your character builds directly. You can however only use one of these, but the benefit will stay with you even outside the Sanctum when you are in Wreaclast. 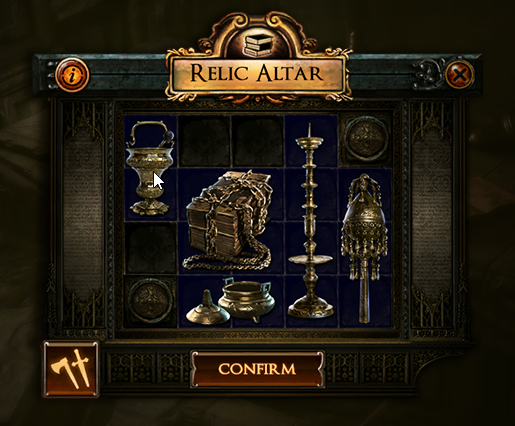 In the Forbidden Sanctum, you will encounter many bosses with random miniboss encounters along the way. At the end of a Sanctum floor, you will have an ultimate showdown against a boss that controls the Forbidden Sanctum. These end-floor bosses will have rewards that are more valuable like Templar Relics, new unique items, Aureus gold coins, loads of experience and much more. 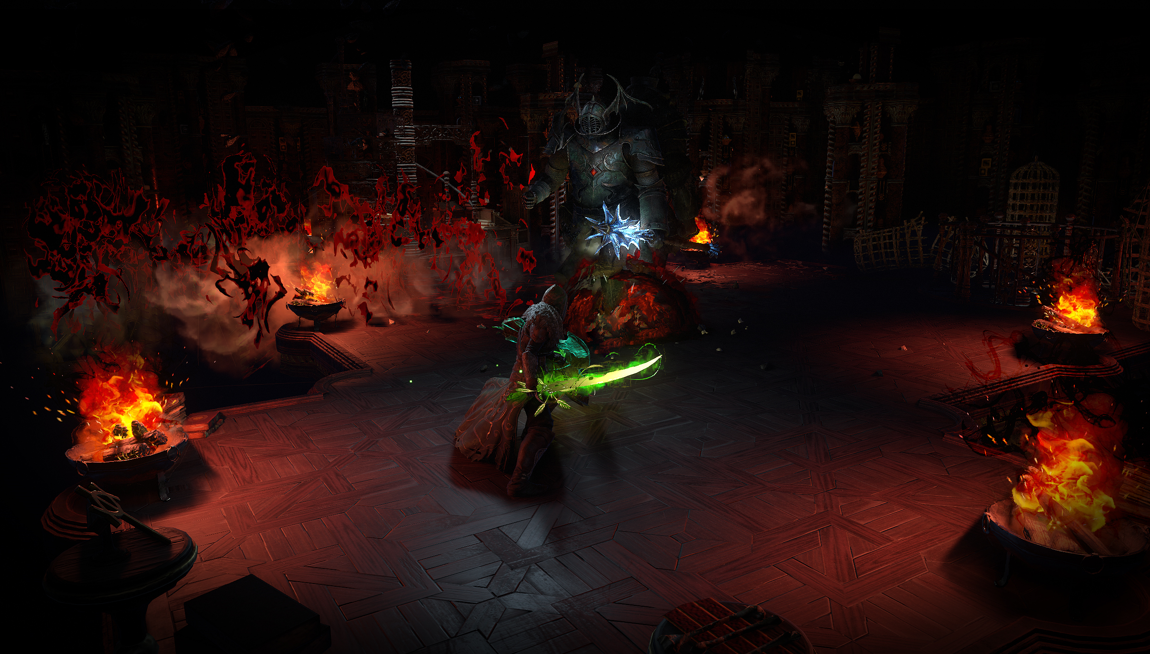 Improvements To The Atlas Endgame

Besides the new league, GGG has also improved the Atlas Passive Tree in a way that players don’t need to respec between mapping and boss killing. You can now invest even more in the content you enjoy. There are 2 new Atlas Memories for Domination and Bestiary that have 9 new Beastcrafting recipes. Eldritch Altars are rebalanced and Maven witnessed map bosses will now also drop Awakened Gems.

The Forbidden Sanctum expansion introduces two new skill gems and seven new Vaal gems. Volcanic Fissure is a new fiery Slam skill that strikes the ground to create a chasm that winds towards your target until it erupts with a burst of fiery projectiles that explode when striking the ground. Frozen Legion is a spell that creates a ring of icy statues that attack using your weapon damage. These statues perform a sweeping ice slash which can overlap.

For more information about the new gems please have a look at the detailed skill gems information page.

There are over 15 new unique items to be found from within the Forbidden Sanctum and throughout Wraeclast and the Atlas. They have also massively increased the power and rarity of ten existing endgame unique weapons to bring them in line with some of Path of Exile’s most iconic unique items. 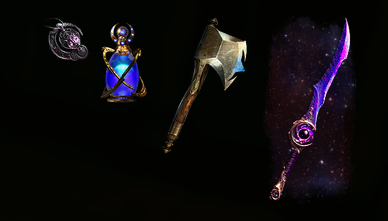 The Archnemesis monster mod system has been replaced with a system that more closely resembles Path of Exile’s initial monster mods, but with modernised balance and effects. This system has been streamlined so that each modifier only does one specific thing and describes exactly what it does. While you’ll still encounter modifier combinations that get your heart racing, these will be rarer than before and easier to understand in the heat of combat. Changes to rare monster rewards mean that you don’t need to summon a magic find culling character to help you with specific monster mods anymore.

This expansion includes a number of changes to Path of Exile’s mechanics. We have improved Jewels as a source of ailment mitigation and have replaced most existing unique Jewels with some powerful new ones. We’ve also rebalanced Hexes to make them stronger against endgame bosses and have reworked most curse mechanics and curse uniques as a result. Our recent balance manifestos and expansion patch notes cover these changes in more detail. 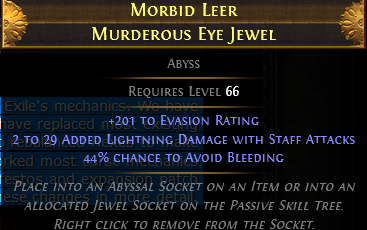 Ruthless is an optional new game mode which offers a more challenging way to play Path of Exile. Ruthless players can expect extreme item scarcity, limited crafting and many other changes such as support gems being drop-only. Ruthless is a mode about friction, tension and anticipation. It’s much more difficult, but overcoming that difficulty feels highly rewarding. In a world where your items are far below par, every item drop has the potential to be the breakthrough one you need.

You can access Ruthless during character creation by selecting it as an additional flag alongside Solo Self-Found and Hardcore. To find out more about what changes it features and the philosophy behind its development, visit pathofexile.com/ruthless. 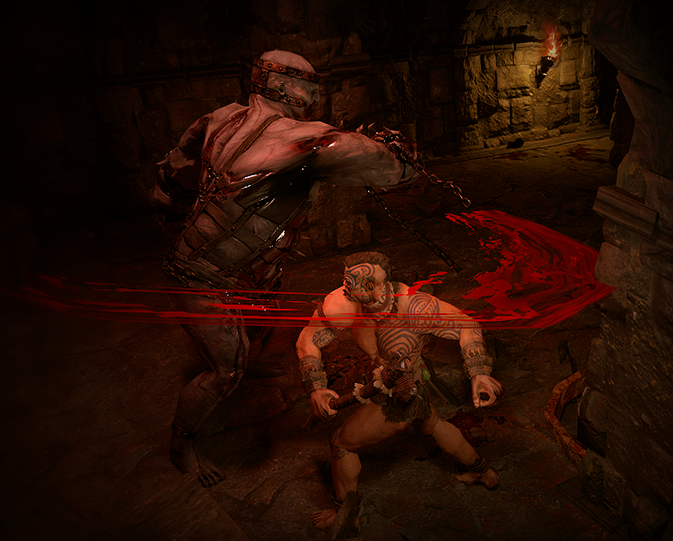 If you want to read the full patch notes you can find them” here.

Be sure to keep an eye on the PoE Vault homepage for the latest news and guide updates as we shift into Path of Exile The Forbiden Sanctum 3.20.

He has close to 25.000 hours of Path of Exile gameplay behind him over the years and started playing in closed alpha. He has been the community manager of GhazzyTV for 8 years and has extensive knowledge of building communities.

Rootz posts his own guides occasionally and he also covers the news and league guides. For any questions about his guides or PoE Vault please join the PoE Vault Discord.