In Path of Exile: Sentinel, ancient constructs have been unearthed across Wraeclast. You will harness the power of these Sentinels to control your level of risk and reward on the battlefield.

In this league, you will uncover and collect Sentinels and take advantage of their great power. When deployed, they follow you for a short time and empower your enemies, greatly increasing both their difficulty and reward.

There are three classes of Sentinels. Stalker Sentinels empower a moderate number of enemies in sequence as you encounter them. Pandemonium Sentinels empower a wide swath of monsters at once in a quick burst. Apex Sentinels only empower rare or unique enemies but have a very strong effect.

The Sentinel Controller is like a runic circuit board that powers your Sentinels and allows you to customise their behaviour. It initially provides enough power to use one Sentinel per area but as you progress, it will gain enough power to support three.

You will place filaments on the Controller to dictate which runic nodes its power flows through. You can freely move filaments around at any time. As you gain more power, it will automatically flow to the next nodes you have connected. Use this Controller to establish specific behaviour for your Sentinel loadout that works well with your desired build. 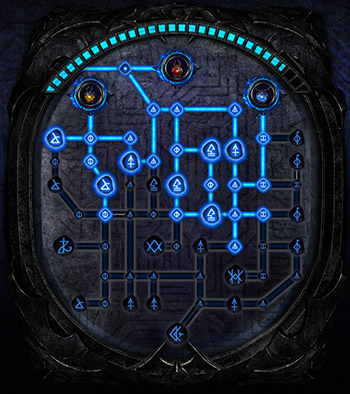 When your Sentinels run out of charge, they can be combined together with a Power Core to assemble a new, fully-charged Sentinel that inherits properties from both of the husks you disassembled. This hybrid Sentinel may also gain special properties such as an exclusive variant base type or modifiers that can only come from the assembly process. 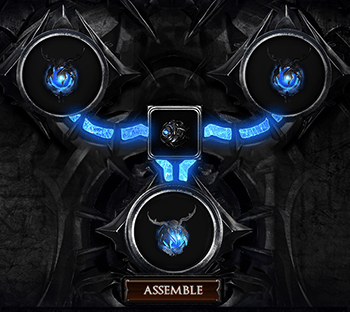 As you travel through Wraeclast, you may uncover or assemble Unique Sentinels. These valuable Sentinels behave in very specialised and powerful ways. For example, The Basilisk causes a wide area-of-effect blast that has a petrification effect on monsters. The Hollow-Eyed Skull is basically a Headhunter in Sentinel form. There are also a set of Unique Sentinels that empower specific Atlas Map Bosses, causing them to become much more dangerous and rewarding.

In the Sentinel League, you may find a new type of rare currency: Recombinators. These allow you to apply the Sentinel Assembly process to your actual items, taking any two pieces of equipment from the same item class and combining them together. While the results are unpredictable, this process could merge the best elements of each item, potentially adding an exclusive new modifier, to create something of unprecedented power. 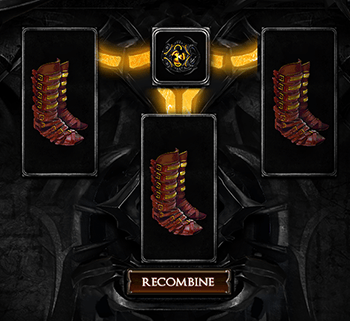 Take Control Of Your Atlas

The best thing about the Siege of the Atlas expansion was the control it gave you over your endgame experience, through the Atlas-wide Passive Tree. We have doubled down on this by introducing 20 new keystone passives to the Atlas tree that allow you to dramatically customise how you play Path of Exile’s endgame.

You can make it so that only your favoured maps will drop, gain bonuses for not modifying your maps with fragments, convert unwanted maps or scarabs into random ones, control how offensive or defensive monsters you encounter in maps are and even turn off specific past leagues to improve the chances of encountering the content you enjoy the most.

Six of the new keystones on the Atlas Passive Tree create uber versions of Path of Exile’s pinnacle boss fights: Venarius, Sirus, The Maven, The Searing Exarch, The Eater of Worlds, The Shaper and The Uber Elder. But be warned: only allocate one of these keystones if you are prepared to face the hardest content Path of Exile has to offer and to earn some of its most seductive rewards.

In our Siege of the Atlas boss kill event, several of our most experienced players earned the right to design unique items, which are being introduced in Path of Exile: Sentinel! These new unique items drop from The Infinite Hunger, The Black Star, The Shaper, The Uber Elder, The Maven and Sirus.

We’re going to try something new with character balance in this expansion. We’re intentionally making no changes to character power. That means no nerfs, no buffs, nothing. Every single build and build guide made for Siege of the Atlas will work exactly the same in Sentinel. You can start planning your league starter right now, with full confidence about exactly how it’s going to play.

We’re replacing all existing monster modifiers with the mods that we introduced in the Archnemesis League, which all have a great impact on combat and are easy to identify at a glance. Magic packs share one modifier between them while Rare monsters typically have two modifiers, and can rarely spawn with more. Multiple synergistic mods can create quite dangerous situations in combat.

The challenge system in the Sentinel League is much harder but more rewarding than that of the past 21 leagues. Early challenges have been condensed so that their rewards unlock at 6 and 12 completions, rather than at 12 and 24. There are far more difficult objectives available to challenge Path of Exile’s best players and there are ten different rewards you can unlock, which comprise two complete armour sets, each with a pair of wings.

Use A Game Controller On Pc

We’ve implemented support for game controllers in the PC version of Path of Exile. This also means that if you’re lucky enough to already have a Steam Deck, you can play Path of Exile on the go! 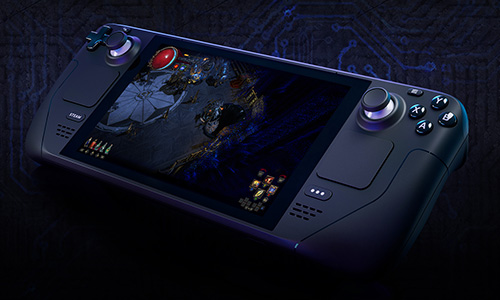 Recommended Builds for Siege of the Atlas and the Archnemesis league

Be sure to keep an eye on the PoE Vault homepage for the latest news and guide updates as we shift into Path of Exile Sentinel 3.18 League

He has close to 25.000 hours of Path of Exile gameplay behind him over the years and started playing in closed alpha. He has been the community manager of GhazzyTV for 8 years and has extensive knowledge of building communities.

Rootz posts his own guides occasionally and he also covers the news and league guides. For any questions about his guides or PoE Vault please join the PoE Vault Discord.