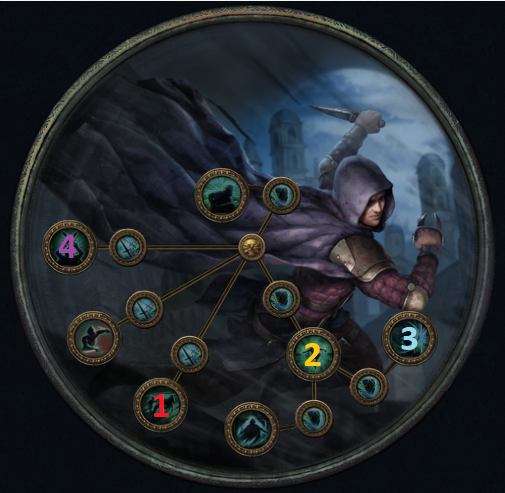 What shall I say. Potentially one of the best ascendancy nodes in the game. Action speed is a really really valuable stat but more so is the free mini temporal chains. Reducing action speed to 92% of their base value is incredibly strong & will make leveling very very smooth.

People will be sleeping on this node. With Soul Thief, you’ll almost always be full ES whilst mapping & since you’re not actively trying to get hit on boss fights, you’re more often than not getting an additional 10% suppression from this node & another source of recovery. 10% Extra Suppressed damage actually means 20% more Spell Mitigation which is absolutely insane. Lastly, the 20% Flat Suppression basically means you’re essentially capped without using any gear.

There really only is one option here. You want to kill all to help Eramir for 2 Skill Points. None of the Bandit options are particularly useful to you for this build.

I would recommend Soul of Shakari here as Damage over Time cannot be Dodged or Evaded. Some extra defenses against that are always nice!