Please check out this section of the guide for our updates for Scourge league.

Whenever you swap to Soul Mantle & Self-Flaggelation, you need a source of Curse “Negation” (this means you can’t “remove them”). There’s various ways of doing this but I think

Viridi's Veil with a Magic Ring is the best way to do it. It offers you about a 33% more multiplier on defenses whilst solving this issue rather cheap.

Soul Mantle is really solid overall and just makes gearing so much easier. The upside of a rare chest piece honestly just no longer provides enough upside to not take this route. You can use a Tabula up to the point you can afford one.

Gloves are fairly flexible here. Life, a lot of it, & Energy Shield are what you’re looking for. Combine those with the necessary amounts of resistances and you’ll be golden. 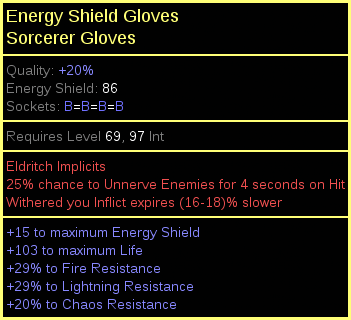 Again, this is one of the pieces where you need Ailment Avoidance. Since you’re crafting that on yourself, you can be fairly greedy for other affixes on your Boots. Look for a lot Life and a decent amount of Resistances while maintaining a fair chunk of Energy Shield! 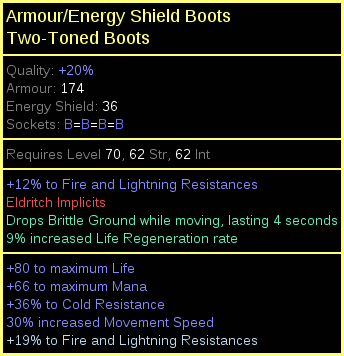 Your best option here is definitely a

Stygian Vise. Grabbing an extra jewel here is nice. Don’t be too concerned about it if you can’t afford a Stygian. A regular

Leather Belt or even 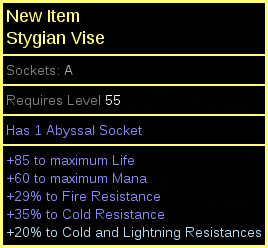 As Dark Pact doesn’t scale well with Item Levels, you’re looking for a generic +1 To Level of Spell Skills here. This will scale your Totem Supports too, which will increase their base Life. If you can’t afford that, you can just drop the gemlevels entirely. 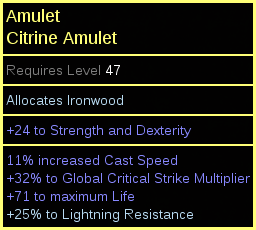 I chose to anoint Whispers of Doom because the

Astral Projector is the baseline of the build, as it makes your Dark Pact cast at range! Should you however choose to not wear this ring and to make Dark Pact totems only cast around their totem, just replace this with a random Life/Resistance ring. Your second one is a Magic Ring to enable Viridi’s effect with Life & Despair on Hit.

You’re using a Wand in this slot, which has a couple of interesting possibilities to it. Again, you could be inveting a whole lot of money into this to scale up your Totem Life though the +1 to All Spell Skills affix. Probably just a lategame upgrade though.
As far as damage on your wand goes, you really like a Profane Wand as you’re trying to get as much Cast Speed as possible. Additionally, Critical Strike Chance for Spells, Spell Damage, Chaos Damage and Critical Strike Multiplier are all really potent affixes! 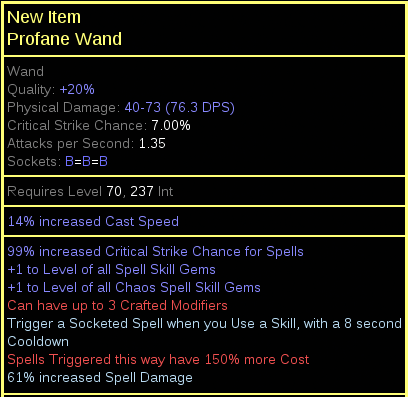 The shield is probably the hardest piece of gear to find, and can either be insanely cheap or incredibly expensive. Generally, a lot of people who sell these kinds of shields can’t see the use for it and might list them very cheap. Some might understand why it is valuable and might list it for a pretty good chunk of currency. The last time I played this build, as a boss killer for my team, we purchased a shield that was close to mirror-tier for 200

Chaos Orbs. Be on the lookout for upgrades, regularly, until you find one you can afford. Until then, just run any Shaper-influenced shield with the +1 to Maximum number of Summoned Totems modifier and some Life. 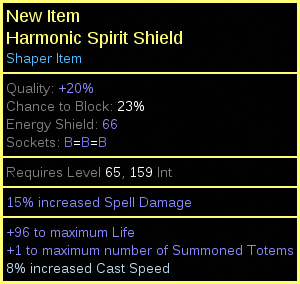 Bottled Faith probably no longer needs an introduction. It is hands down the most insane Flask in the game and adds about 17% more Damage to this build! Additionally, it provides you with more Consecrated Ground to stand on and thus more reliable Life Regen. This Flask is outrageous and definitely worth the expensive price it usually sits at.

Next up is the omnipresent

Quicksilver Flask, because honestly mobility is just super important. As for your other Flasks, they’re highly customizable but I really like a

Granite Flask and a

Jade Flask because of the aura’s were running and how they’re further scaling one and other.

Lastly, as you do sometimes get hit, a panic button in a

Eternal Life Flask is probably recommended. The reason why you’re not running the more standard Bubbling or Seething Divine Life is because of the Regeneration applying to your Energy Shield. You will sometimes need a regular Life Regeneration button, which a Panicked Eternal is just a lot better at!

Regardless of which utility Flasks you go for and whether you follow our recommendations or not, you’ll need to stick to the suffixes we have picked for you (Staunching, Warding). The affixes on your non-unique Flasks can be changed around, but I recommend the following setup (based on the Flask duration, charges, and affix priorities):

This jewel is mandatory after getting Viridi’s / Soul Mantle / Magic Ring combination! Huge damage source for the build.

Dark Pact as you can chose from a variety of options! We opted to suggest fairly high end Cluster Jewels as they are generally not too contested and thus not too expensive. Should they pose a problem, feel free to lose a notable on the Larges or grab a 6 Passives one on the Mediums.

Now, because you want to be able to run two Medium Cluster Jewels, you will need one Large Cluster Jewel. As mentioned, you really want a specific set of notables on it but if that seems to be too expensive, you can drop whichever one! Ideally, you’re looking for Dark Ideation, Unholy Grace and Unwaveringly Evil. If you can’t find this, obviously 3 Notables is always better then dropping a Notable all together! 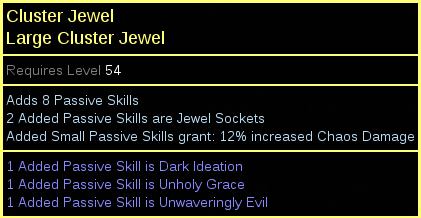 For your Medium Cluster Jewels, you’re looking for the Ancestral Preservation because that gives you Totem Life and Totem Life is nice! For your second notable, I think Snaring Spirits is definitely the strongest notable. Aside from providing you with a ton of DPS, it also adds another safety mechanic as it hinders enemies when you summon a Totem.

Because you want to stay relatively tanky, I really like grabbing #% increased Maximum Life on every single one of my Rare jewels. Your best modifiers are Totem Life, Cast Speed, Critical Strike Multiplier followed by any source of Increased damage. I suggest you grab jewels that have a Life modifier, one Totem Life roll, and one other benefiting modifier.