Hi everyone and welcome to the first in our series of guides we are going to call Learning to Craft. Through these guides we are going to start with the basics of crafting and work our way through even the most advanced crafting methods out there today in Path of Exile. Along with these written guides we will have accompanying videos that you can follow along with every step of the way as we take you from someone who knows nothing about crafting all the way up to having the skills to make mirror tier items yourself! In these guides we will be utilizing CraftOfExile.com to showcase all the things that we can do starting with the basics that we will go over in this first guide. Make sure to check out the Video below.

With that out of the way lets go ahead and get started!

Section 1 Anatomy of an Item

Let’s go ahead and start with one of the most important things in PoE Crafting, understanding what makes up the different parts and kinds of items.

Item Modifiers:
There 3 types of base modifiers
Enchants which we will go over later in the guide in more detail
Implicits which cannot be changed without special Eldritch Currency under specific conditions
Explicits which are the prefixes and suffixes that we will be working with the most. Depending on the rarity of the item will determine how many of these and what currencies we may use to modify them. Speaking of rairties…

Item Rarities:
There are 4 different base rarities in the game and each has restrictions on what currencies you can use on them.

Normal: These are our basic White Items the only have their base stats and sometimes a base implicit
Magic: Can have up to 1 Prefix Modifier and 1 Suffix Modifier
Rare: Can have up to 3 Prefix Modifiers and 3 Suffix Modifiers
Unique: Have a specific set of Explicit Modifiers that cannot be modified by most currencies in the game the exception being Divine Orbs to reroll the numerical values of the Explicit modifiers, Blessed orbs to reroll the Values of any implicit Modifiers, and Vaal Orbs to Corrupt the item.

Influence types:
Lets talk about Influence types on items. There are 3 main types of influence that you will see on an Item Conqueror, which includes Shaper, Elder, Hunter, Crusader, Redeemer, and Warlord, Synthesized, and Eldritch. We will go into more details on each of those now.

Conqueror Influences:
All conqueror influenced items drop from maps or bosses that are influenced by the specific type of Boss that is influencing the map. Each mob in a map influenced by a boss has a chance to drop an item with that particular influence. They are for the most part regular items that now have the possibility to have specific Conqueror modifiers roll on them now (we will go into these kinds of modifiers later in the guide)

Fractured items Which have a specific prefix or suffix locked in place which cannot be changed or removed in any way.

Eldritch influences:
Eldritch Influences commonly called Eater and Exarch are a relatively new addition to Path of Exile which allows you to change the implicits of an item into new and interesting modifiers by using Eldritch Currency.
We will go into more detail later on in the guide when we take a deeper dive into Influenced modifiers.

If you look at most items you will see a stat requirement to equip them. What a lot of people don’t realize is that the stat requirements on an item tell you a lot more about that item than just what you need to equip it.

That is how we determine the Base type of an item by looking at what stats the item requires to equip along with the name of the base item itself.

Keep in mind that some types of modifiers can only roll on items that are of a specific base type.

When in doubt always remember that you can use CraftOfExile.com to see what modifiers can roll on your particular item!

Section 3 All about Implicits

There are 3 kinds of Implicits that an item can have

Base, Synthesized, and Eldritch

Synthesized Implicits are special synthesis implicits that can be on items dropped from certain encounters (there are too many to list here but check out CraftofExile.com for a full list)

There are a few different types of enchants that can be applied to items.

Helmets, Gloves, Boots and Belts can receive Enchants from Lab

Rings and Amulets can receive enchants via the anoint system by using Oils dropped from blight encounters on them.

One of the most important things when you are determining what influences you want or need is to use CraftOfExile.com to make sure that you are using the influence you need to get the modifier you want!

Certain Influences can be combined using a special currency called and awakeners orb, Those are the conqueror influences Shaper, Elder, Hunter, Crusader, Redeemer, and Warlord.

The Item level or iLvl of the items you are crafting on matters a ton! If you take a look at any of the modifiers that can roll on an item you are crafting on CraftOfExile.com you will show an iLvl number next to it. That Number is the minimum iLvl that the item must be to be able to roll that modifier at all.

We can use this in two ways, the most obvious being that if we want a tier 1 modifier we must use the proper iLvl to get that modifier, and the other being that if there are certain modifiers we don’t want we can use a lower iLvl to remove those modifiers from the pool of modifiers that can roll (mainly used when rolling certain Cluster Jewels)

When it come to Benchcrafting there are a couple tricks we want to make sure you know.

Socketing and fusing is normally cheaper to spam with the currency if the item you are trying to socket or link is at 20% quality minimum, if you can get it above 20% the higher the quality of the item the easier it will be to Socket or 6 link on average.

A few tricks you can do with the bench though is when you are trying to get off colors on an item. What do I mean by off colors? Well remember those stats from earlier that determine the base type of an item? We can use a little tool called the Vorici Calculator located at https://siveran.github.io/calc.html to determine the average number of chromatic orbs required to get the colors we need for our build by putting in the stat requirements of the item and what colors we want.

Now lets say you have a 4 socket Str based item but you need 4 blue sockets on it, That will take a lot of chromatic orbs if you just spam them on it. What we can do to make it much easier and cheaper is to make the item have 2 sockets with the benchcraft and then use the 2 blue sockets benchcraft to guarantee those 2 will be blue. From there all we have to do is use the 3 socket benchcraft and if we hit a 3rd blue we are good, if we don’t then we just make it 2 sockets again and we rinse and repeat until we hit the 3rd blue socket and then we do the same for the 4th socket! It will save you a ton of time when you are trying to off color an item!

Now lets quickly talk about Benchcrafted Prefixes and Suffixes, You can only have 1 benchcrafted modifier on an item at a time unless you use the VERY expensive “Can have up to 3 Crafted Modifiers” craft commonly known as Multi Mod that you unlock from the recipe in the Putrid Cloister Map. With this you can then have the Multi Mod craft and 2 other Benchcrafted Modifiers on your item!

Fractured modifiers are a special kind of modifier that appear as a grayish brown color and no matter what currency you use on the item that modifier will never change.

Local modifiers commonly found on weapons and armours are modifiers that only effect that specific item. 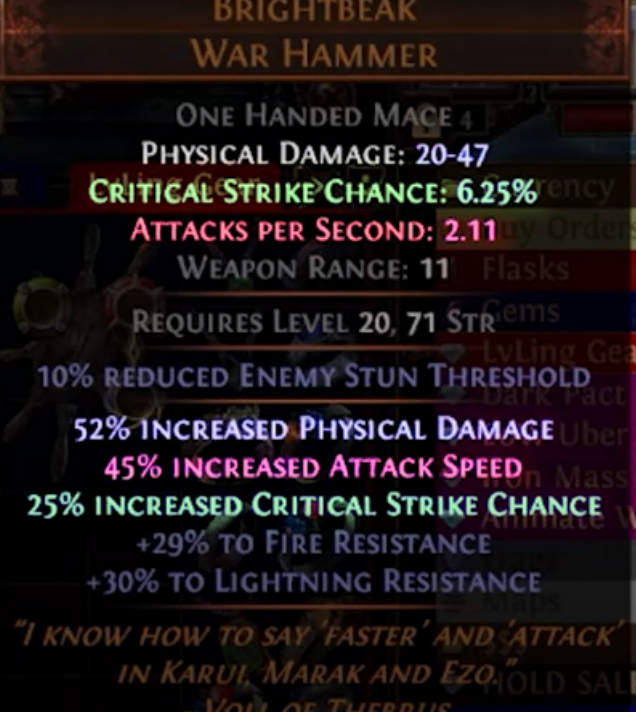 + to maximum life on any item
+ to a specific resistance
increases to energy shield on a Ring, Amulet, or Belt
increased global critical strike chance

If you get an item with a delve or incursion modifier (you can check on Craftofexile.com to see if it is one)
and you want to use that modifier make sure you do not do anything that would remove it from the item as once they are gone they CANNOT be placed back on the item in any way and you will have to buy a new item to start crafting with again that already has the particular modifier on it.

You can not for the most part craft on a corrupted item whatsoever, with the only exceptions being special Tainted Currency that will be gone over in more detail in a later guide, and the Benchcrafts that only effect the color or number of sockets on an item, but be careful as the socket recipes on the bench will now also cost an equal number of Vaal Orbs to craft and that can get expensive!

Divine Orb drops! And look forward to having you read the more advanced guides that will be coming in the future!