Since this build works on low levels, that generally means it will carry you fine into the endgame of Path of Exile. None of the items are required for it to progress through the earlier stages of the game but I’ll leave you with this Path of Building to give you an idea as to what I would suggest your tree looks like at the beginning of maps.

If you’re not comfortable with Path of Building, here’s a PoePlanner to give you an idea of how your tree should look like whenever you’re at about that level.

So, in case you are playing Solo Self-Found, or for some reason at whatever point in the future the helmets Hecome impossible to find / afford, there is a really easy and convenient way around using the Helmet enchant. If you pick up the 3 nodes leading to Sovereignty, as well as the Notable itself, you can drop the Helmet entirely. Basically, that means the Helmet is only providing you with 4 Skill Points, but as it is generally only a couple of Chaos in a Trade-League environment we couldn’t not suggest it. Additionally, since you most likely do not have access to Awakened Gems, you’re replacing

Immolate Support. From there on, you either replace one of your jewels by a

Conqueror's Efficiency or you also replace your

Elemental Focus Support for a 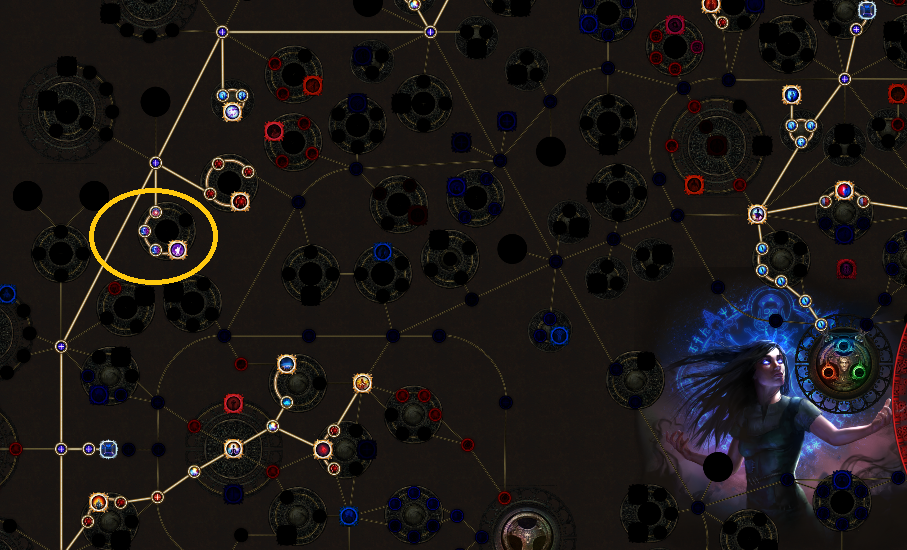 We opted to run an

Energy Leech Support in the optimal set of links for the build. In case you do not have the Life as Extra Energy Shield craft on the Chest piece or the

Glorious Vanity yet, it is probably not worth leeching Energy Shield whatsoever, and you’re most likely better off running a

Controlled Destruction Support. As per usual, Awakened Gems are nice upgrade but should only be bought after you have completed gathering the rest of your gear.

Since we’re running Elemental Focus on our Blazing Salvo, Fireball is going to take care of the Ignites. This is both important for

Cinderswallow Urn as well as the

Immolate Support you’d be running in your Blazing Salvo. On top of that, Fireball is the spell that does most of the heavy lifting while clearing, as it has a tiny bit better spread than Blazing Salvo does.

Since you need a wand attack to make your Spellslinger spells go off,

Frenzy is the skill you’re going to be attacking with. Supported by the

Barrage Support, it’ll make both of your Spellslingers go off simultaneously for more convenience while mapping. We’re supporting it by Combustion to further diminish the enemies’ Fire Resistance and Inspiration to generate Inspiration-charges for our Fireball and Blazing Salvo to benefit from.

Buffs in a Trigger Wand

As mentioned in the Gearing section, you really want a Trigger wand to automate as many of your buffs as possible. The buffs you’re going to want to socket in them are Wave of Conviction for Fire Exposure, Flame Wall for the huge Added Fire Damage buff and Flammability as your curse of choosing.

Because you’re playing an Elementalist, you’re picking up a lot of additional Maximum Golems both in the Ascendancy and in the tree. Therefore, the buffs these little fellows give are pretty significant! We chose to run 2 defensive options for Physical Mitigation and Life Regen, and 2 offensive ones for generic increased Damage and Critical Strike Chance.

As for your last three sockets, in your shield, we were lacking a mobility skill, in

Flame Dash and our Herald of choosing,

Herald of Ash. Of course, as in every spellcaster, you’re going to want to link an

Arcane Surge Support to the Flame Dash but make sure it is NOT linked to the Herald of Ash, as that will make it increase more Mana! You want a 2-Link and a 1-Link in your shield’s 3 sockets!