Strongboxes were first introduced in Patch 1.1: Ambush League, and have been one of the core game features ever since its conclusion. Strongboxes spawn guardians when you interact with them, and defeating them will reward the player with the contents of the chest.

Strongboxes have rarities and affixes, just like an item or a map. There are several different types, which are listed in the section below. Strongboxes are Unidentified by default, and a

Scroll of Wisdom is required in order to see what mods are on the box. Just as they can be identified, the strongboxes can also be crafted using other currency as well. This will also be discussed later in this guide, under the Crafting Strongboxes section. Strongboxes do not need to be identified to be opened, however, they must be identified if you wish to modify the affixes on the box.

Most strongboxes provide little more than some extra quantity and monsters in the area you are farming, however, there are some specific types and strategies to take note of that can provide massive returns.

Here is a table that illustrates all potential types of strongboxes, their rewards, and their chance to spawn (relative to each other). The actual chance for any strongbox to appear in an area is unknown. Essentially, the table below shows what the chance is for a strongbox to be of a certain kind if one does spawn in the area.

Cartographer’s Strongboxes are no longer able to spawn in Maps T13 and above, to prevent great swings of map sustain early in the leagues. Their approximate chance to spawn is unknown, though based on anecdotal experience, they are extremely rare and usually only encountered a couple of times in an entire league.

Large and Ornate Strongboxes are merely improved versions of the standard, unnamed strongbox, except that they have slightly raised base Quantity and Rarity, respectively.

There are currently over 10 different Unique strongboxes, though some are far more desirable than others.

There are additional “special” Unique strongboxes that only spawn in specific maps. These are different because they do not obey strong boxes’ typical rules. For example, not all of them contain monster guardians, and most are found at the end of the Map as reward for completing it. In the Oba’s Cursed Trove Map, for example, the player is always rewarded with five strongboxes upon completing the map, three of which are Unique and can only be found within the map.

Should I Craft a Strongbox to Increase the Rewards?

Most strongboxes are not worth modifying at all, as the chance for them to contain rewards is negligible, and crafting takes both time and currency. As is the case with all Unique items, Unique Strongboxes cannot be modified. Strongboxes also benefit from the Quantity bonus of an area, just like all loot in Path of Exile, making strongboxes found in Red Maps typically more rewarding and worthwhile to craft.

So which strongboxes should be crafted? The answer is a little variable, depending on a few factors such as your pace of play, your current wealth, your choice of the league, and how early in the league it may be. Diviner’s Strongboxes are always worth crafting, due to their consistent and potentially lucrative returns. Below we have provided a list of boxes that can or could be considered for crafting, in order of desirability:

Arcanist’s boxes are only worth crafting in some instances, as their potential for large returns is not nearly as potent as a Diviner’s box. Do not bother investing much into them, and certainly do not use

Chaos Orbs if you intend to roll them.

How Do I Craft a Strongbox?

To craft a strongbox, we make use of the following items:

Just like crafting an item, use a Transmute or an Alchemy on the box, then roll it until you have desirable mods. Crafting with Chaos is more expensive, but will result in more mods on the box and better potential returns. If you want to hold onto your Chaos, use Alterations instead, then Regal the box once you have the desired mods.

For most boxes, the Contains # Additional Items is the most desirable. Quantity increases can also be potent, especially in combination with the aforementioned mod. Engineer’s Orbs improve the Quality of strongboxes. Be sure to Scour the box first before applying the quality currency, then craft the mods onto it afterwards. Engineer’s Orbs should only be used on Diviner’s boxes. The priority for affixes that increase the chest rewards for Diviner’s Strongboxes is as follows:

Here is an example of a well-crafted Diviner’s box: 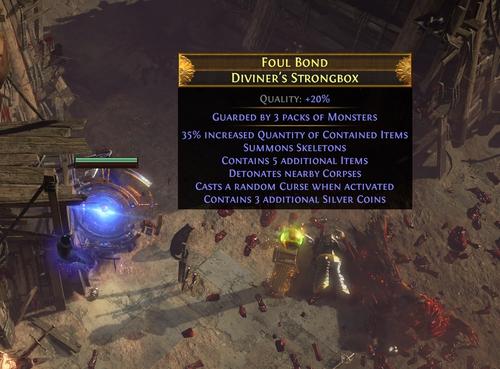 Armourer’s boxes can also be crafted early in the League, though it is a niche tactic. Using a

Vaal Orb on them, especially with additional items mods, can produce five and six linked items with a much greater degree of frequency than normal. Using a

Orb of Chance also has a small chance to convert it to Kaom’s Cache, one of the more valuable Unique strongboxes.

While Strongboxes are not particularly dangerous, they can result in quick and unexpected deaths if proper precautions are not taken. Freezes you on activation is a common affix, for example, so you will always want a Freeze immunity flask running before you click on an unidentified box.

Casts Ice Nova can also be an extremely dangerous mod for squishier builds, as it hits extremely hard, often times for thousands of damage in higher tier Maps. The Ice Nova has an extremely large radius, and combined with Map affixes such as -% to Maximum Resistances, this can easily result in instant death. The +# Chest Level affix also affects the damage of the Ice Nova cast, so beware. Use a movement skill to get away after opening the box if you are nervous about the damage.

Detonates Nearby Corpses is potentially the most lethal of all affixes, depending on whether or not your build destroys corpses automatically. The explosions can be easily avoided, but this affix is more of a “quiet killer”, catching players who are on auto-pilot off guard and instantly annihilating them.

Since the Siege of the Atlas was introduced we also got strongboxes on the atlas skill tree as a farming strategy. Selecting all the Strongbox nodes will get you the following stats.

To see these nodes on the atlas skill tree please check out this link
Selecting the strong box nodes early on in a league can help you start off your build faster. The strongbox nodes are certainly not a waste of your points.

Getting more strongboxes in your maps.

An always certain way of forcing strongboxes is by using an ambush scarab, there are 3 types namely Rusted, Polished and Gilded. Each of them adds a different amount of strongboxes but they also vary in price.

Depending on the league you might also get Ambush on Kiracs map device.

Patrick has been playing PoE since Closed Beta in 2011. He creates PoE guides, focusing on League Mechanics, as well as videos talking about PoE.