The Heist League mechanic is the most generous reward structure ever featured in a Path of Exile to date.

The amount of currency, item-rewards, and straight up new toys that were added with this league is absolutely unprecedented and deserves its own, lengthy, write-up on this page.

We will be covering the following topics on this page:

During Heists and Grand Heists, you are inevitably going to run into “small” chests and a few bigger counterparts, which will always be locked behind an ability door. Those bigger chest rooms, featuring the larger chests, are called “Secret Rooms”.

Inside of Heists, you normally get anywhere from 2-4 Secret Rooms available to you per run, whereby Grand Heists require you to reveal them each beforehand, but offer a grander total of possible Secret Rooms with a larger variety of rewards per run as well.

You usually find around 5-30 small chests per Heist. They do not require any special ability to open, nor do they require to be “unlocked” for Grand Heists in any way. 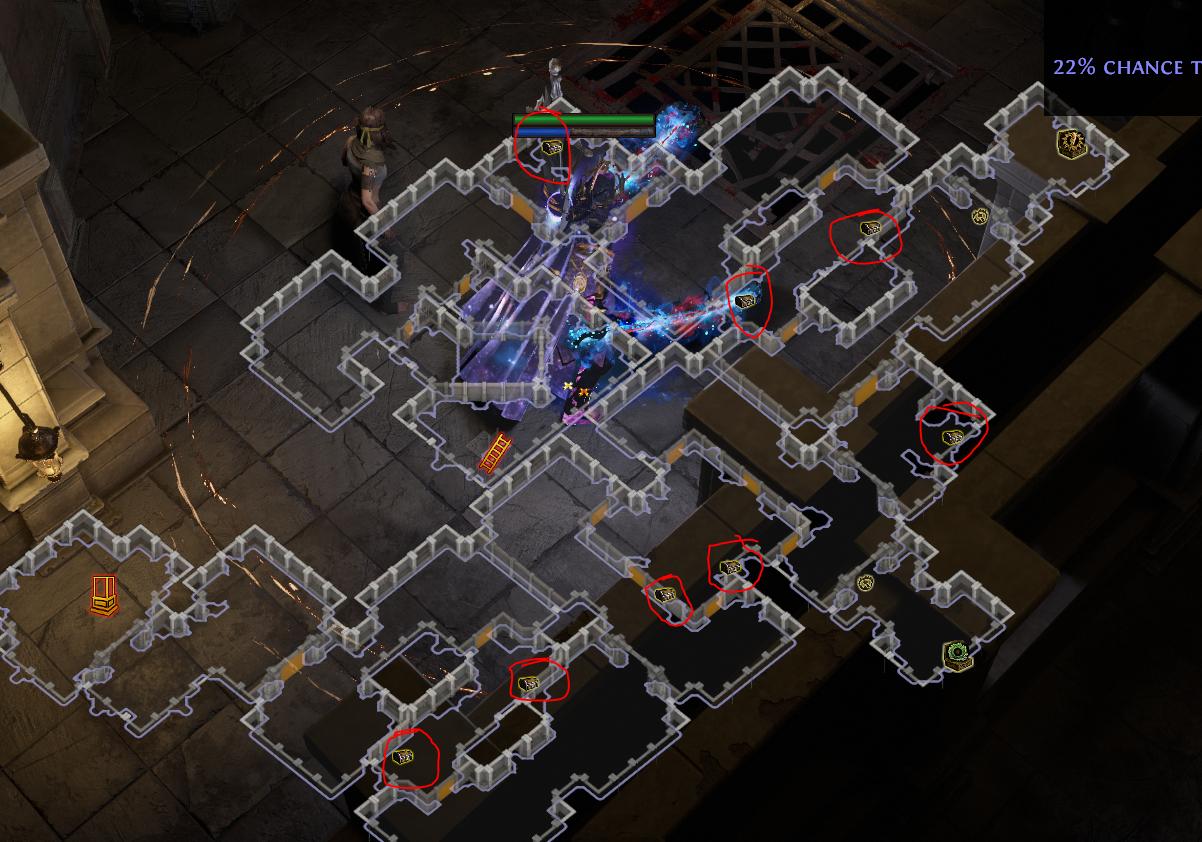 Opening “small chests” requires no effort and raises the alarm level by a minimal amount. Opening them AFTER the lockdown has started (timer event), will decrease the remaining Lockdown timer by 1 second per chest. You can make great use of this by intentionally triggering the alarm on a Secret Room chest, to then rush towards a large cluster of smaller chests and all open them in succession, if you got a lot of “Increased Time of Lockdown” modifiers, as they will simply take away 1 second from the timer, no matter how long the timer actually is.

They contain a random assortment of loot, similar to the “Chest Icon” we’ve known since Legion league. They can contain Divination Cards, Maps, Essences, Catalysts, etc, pretty much anything you can imagine as potential loot can drop from them. 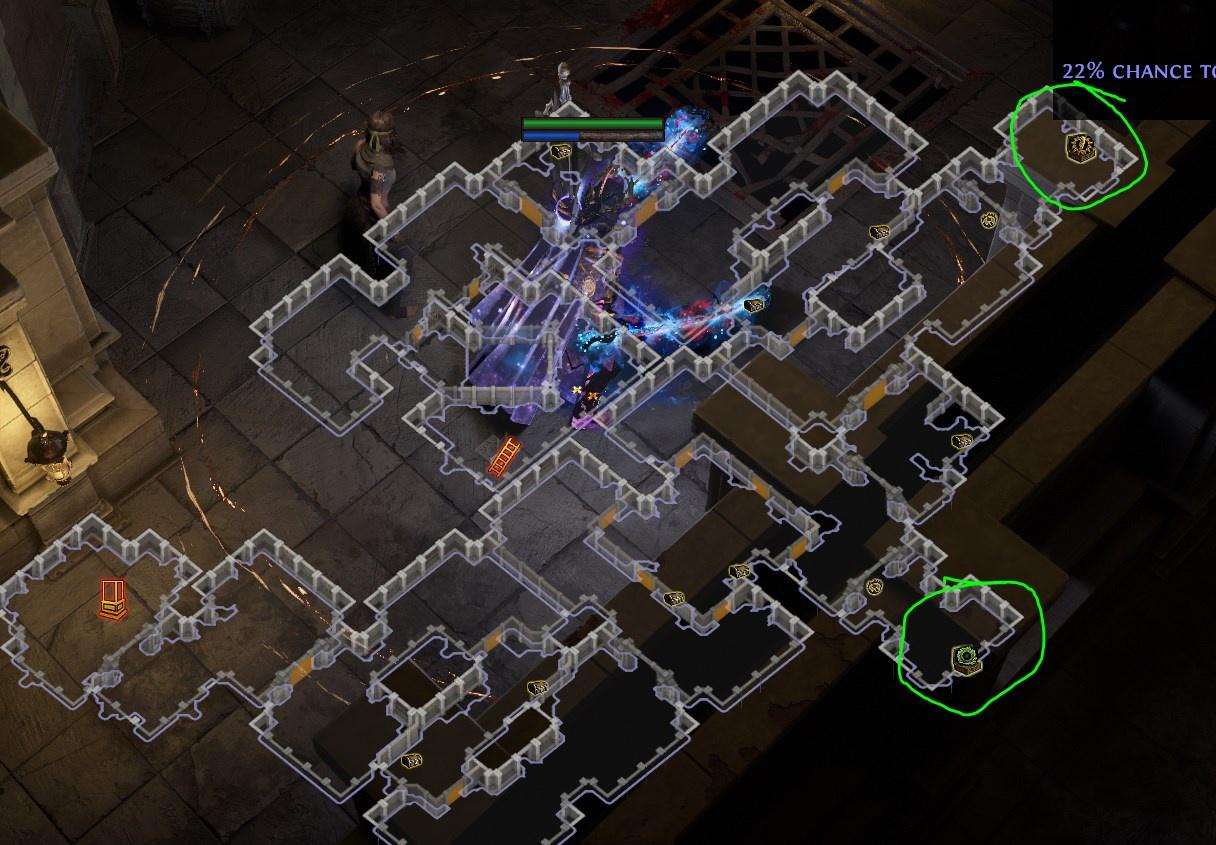 The Secret Room chests, on the other hand, all contain very particular subsets of items. They will be marked with an icon, similar to the ones we’ve been used to since Legion. Stacked Decks represent Divination Card boxes, a Sealed Prophecy represents Prophecy Containers, etc.

Opening them causes a LARGE amount of alert level to be added to the meter, so you can usually only open about 2-3 of these large chests per run, barring any special modifiers such as Karst’s up to 40% reduction in exactly that, through his Heist Perk.

While small chests exist on every map, every layout and every Heist in the exact same manner (the only difference being the number of them, between each Heist), this is not the case for the Secret Rooms. 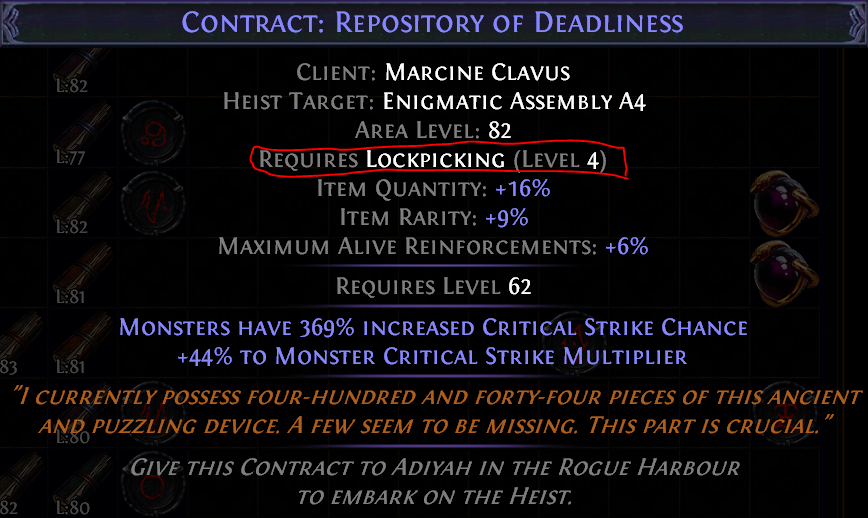 This requirement will indicate also which Secret Rooms can be available from the Heist itself. Each ability usually has 1-2 different options, but some have more than that and can offer up to 4 different Secret Room assortments. Be aware that the Secret Rooms do not have a minimum or maximum number of appearances, so just because any one ability might only have 2 different Secret Rooms possible, doesn’t mean you will always get both of them, if you have 2+ Secret Rooms per Heist. You can end up getting 6x the same reward type, or none of the ones you want at all.

We’ve created a handy cheatsheet for you (inspired by the the PoE community, specifically reddit), that you can take with you on your Heists, in order to properly prepare your Rogue Companion’s gear and your Heists, for the best possible reward outcome for you. 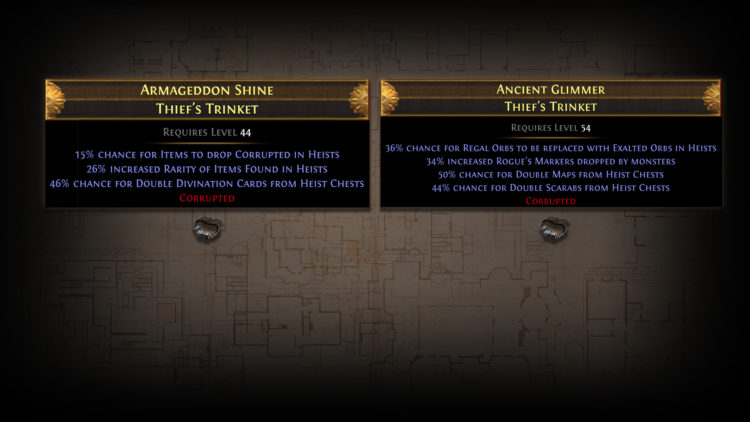 For the first time in the history of Path of Exile, GGG has added a new equipment slot to the players’ characters: the trinket slot.

Heist features this new item-type as an exclusive Grand Heist reward. They vastly increase the amount of Heist-specific rewards you will acquire, but can also, in rare situations, provide benefits to your play outside of the heists.

They drop exclusively Corrupted and as such, cannot be crafted. If you don’t like the trinket you received, simply vendor it, sell it to another player or delete it.

There is no way to alter them, as far as we know.

In order to obtain your very own Trinkets, as buying good ones is likely going to be very costly, you will have to engage with the Grand Heists and specifically search for the “Trinket” reward type in your Curio displays.

You can inspect all the Trinkets available to you before picking one, in the vault room itself, so make sure to take your time and pick the best possible one for your intended playstyle and Heist interest. 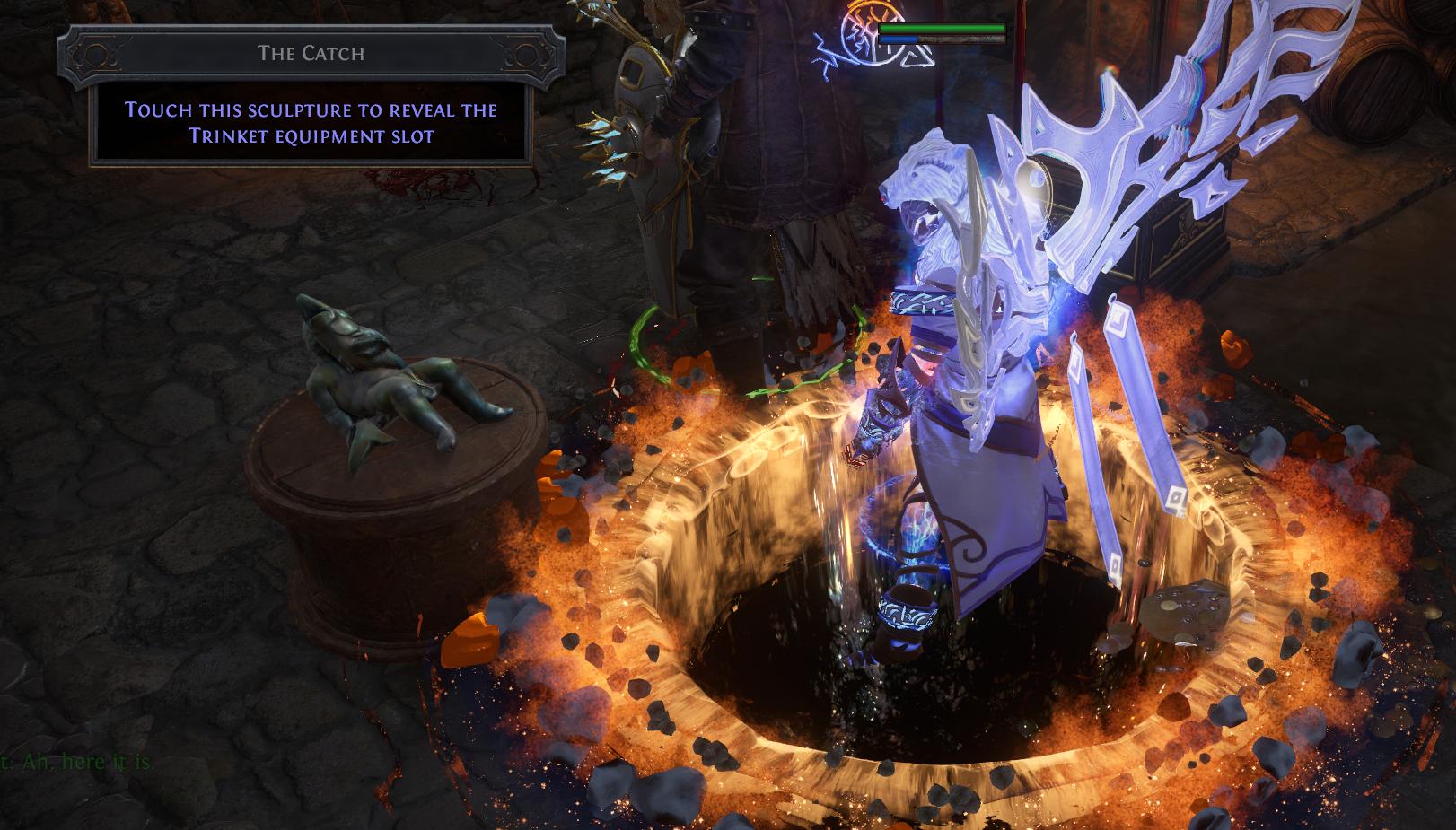 Make sure to interact with the Curio inside of the vault room, in order to permanently unlock your trinket slot on that character.

Be aware that EACH ONE of your characters has to find their very own trinket at least a single time, in order to unlock their personal trinket slots, as they’re not account-bound, but character-bound instead.

One additional note, in case you receive trinkets you don’t want or you upgrade older ones, you can trade them in 5:1 with any vendor, to receive a random new trinket. They will still be Corrupted, but at least you can make something out of the old ones… recycling at its best! 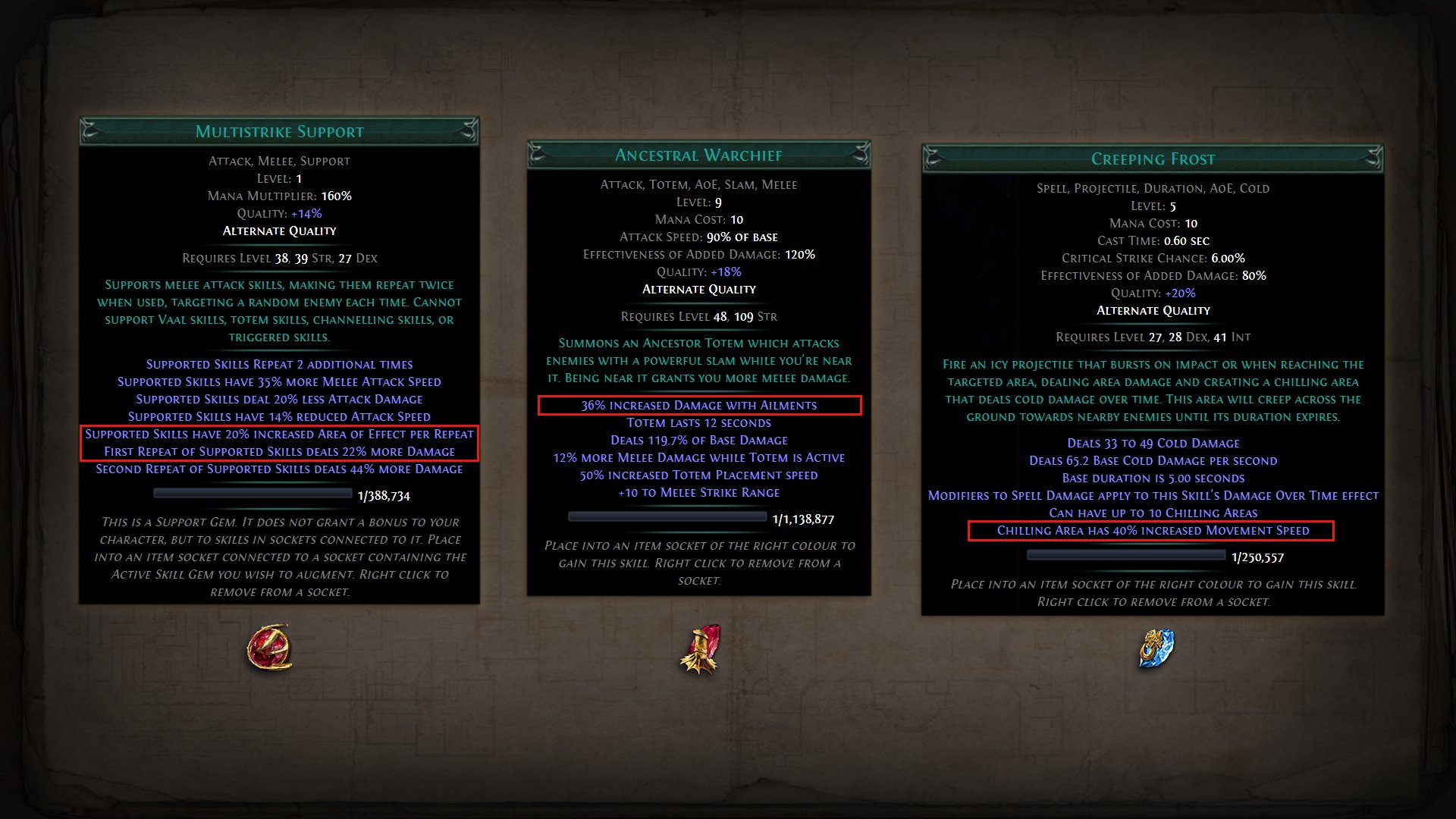 Grand Heists also allow players to acquire over 900 new skill gems, which feature a reworked quality benefit. As you increase the quality of these gems, using

Gemcutter's Prisms, they gain an entirely different bonus than their normal skill-gem counterparts.

The majority of these gems are not TOO interesting or impressive, but it is very apparent that SOME of them are extremely powerful and coveted by the community as a result already. In the future, a list will be compiled here, showing off the most coveted ones, once the economy of the softcore league has stabilised a little.

You can also create these gems yourself, to a certain degree, using a newly introduced, consumable currencies “Prime Regrading Lens” and “Secondary Regarding Lens”. Their exact functionality has not yet been determined. 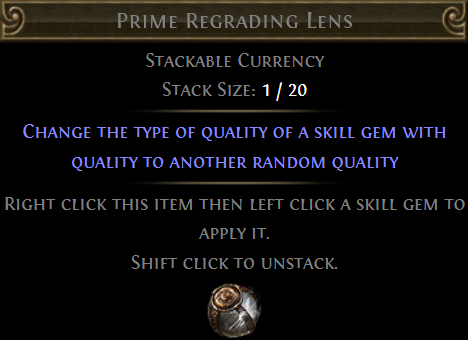 Replica Unique items result from attempts to re-create unique items of legend, where the end product has a few crucial differences. They’re often appropriate for entirely different character builds than the original item and will be dropping in Grand Heists exclusively as well.

Over 100 Unique items have received a Replica version in this league, which provides a ton of additional character-building opportunities to the playerbase going forward.

The idea to change only a simple thing about a unique item has been around in the community for a LONG time and feels like a perfect fit for the game as it currently stands. Many unique items only really require a slight change to be useful or build-enabling and this provides GGG with the opportunity to test out these changes in a void-able environment, without any overarching consequences for the remainder of the game’s life.

While there is no way to obtain any SPECIFIC Replica Unique, you do usually get the choice of around 4-5 different ones to take one of them out with you. As a result, if you are trying to farm for one particular one, it is currently advised to simply run the highest number of Wings per Grand Heist guaranteeing “Replica Uniques” in their Curios as possible. 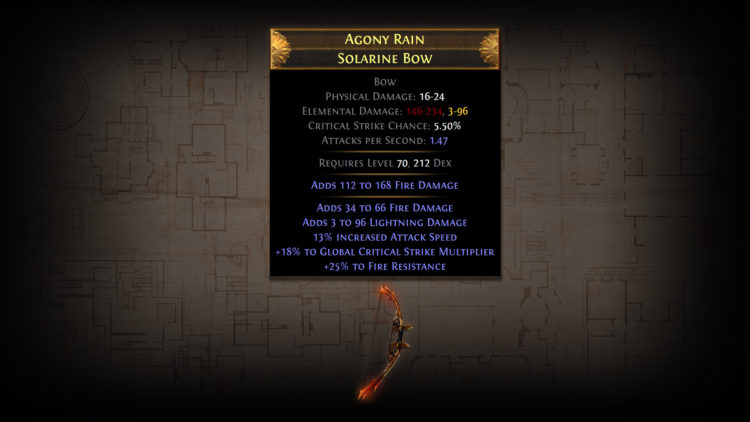 Experimented Base Types are a variety of new item base types that have exotic properties that differ from their core-game counterparts. These bases come with very powerful mods already on them, but are also be entirely craftable, just like their non-experimental counterpart items.
Each weapon type has a couple new base types, resulting in a ton of new bases to play, craft and experiment with!

The full list of all the new base types introduced in Heist league: 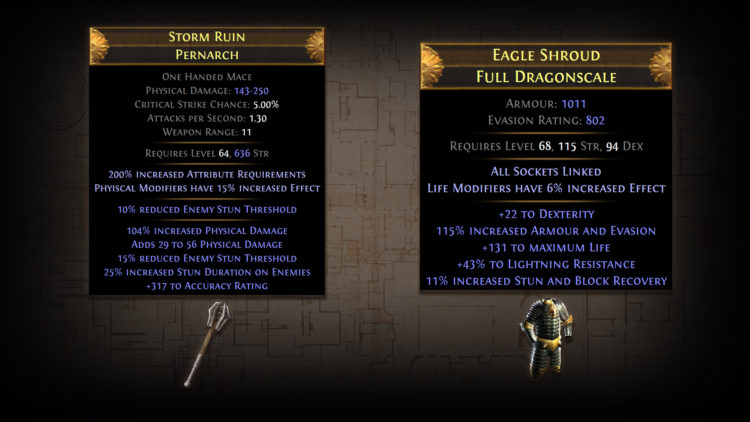 The last of the new heist-specific rewards is new Armour and Weapon Enchantments. These items drop pre-enchanted and pre-rolled with a variety of different modifiers.

The enchantment modifiers can be really powerful and even warrant downsides (such as the mace shown in the picture above), whereby the normal modifiers the item comes with will be pre-rolled using a new system that GGG is trying to test in this league.

Sanctified Fossil crafts items and as such, we can expect some decently rolled items being created and dropped with the corresponding enchantments on them over the course of the league.

You can apply (or re-roll) enchants on your own weapons and armour using the “Tempering Orb” or “Tailoring Orb” respectively. 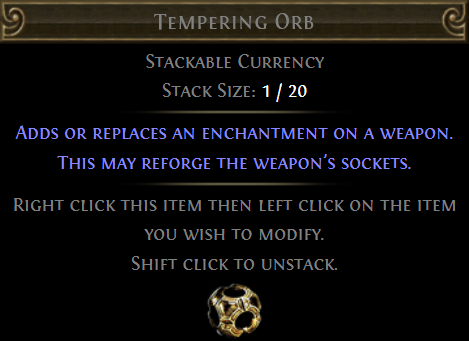 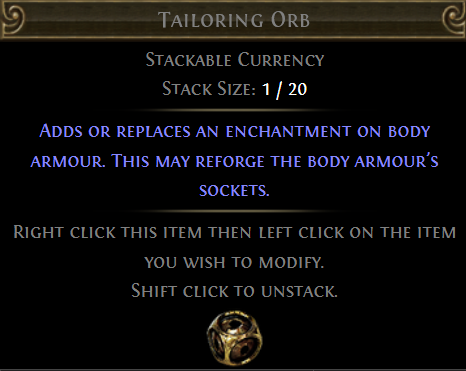