Minion Helmets can be extremely confusing, as they often make use of 2 influence types on top of modifiers to socketed minion gems. We have written this guide to give you an easy step by step rundown to follow on making your own helmet.

On a medium budget they can often be cheaper to craft yourself than buying a finished product, as the player base defined meta heavily impacts the demand of items, such as Minion Helmets in Archnemesis League.

This craft can also be seen here using the new Craft Of Exile Kranglandanator 9001. We can use this app to simulate crafting the item across however many trials as we want.

Our finished product will be a Bone Helmet with both Shaper and Elder influence, our main modifiers will be 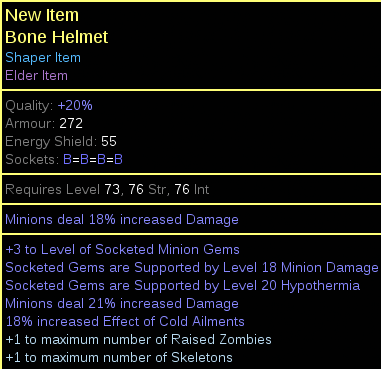 The perfect base will have be a Bone Helmet with both Elder and Shaper influence, as well as an Item Level of 86 or higher, this item level is required to hit +3 to level of socketed minion gems.

Either buy or find an ilvl 86+ Bone helmet, even if we don’t have influence on it yet don’t worry as it can be forced with harvest crafting.

Awakener's Orb the item with another helmet of the other influence type we’re looking for. ( The influence is transferred onto the second base we click with our awakener orb, and the first item is consumed. As such, always make sure to click your Bone Helmet base second). the 2nd helmet of the influence we’re missing doesn’t need to have a specific item level, and will easily be available for purchase on the trade website for a chaos or two.

Potent Chaotic Resonators, and spam them on the Shaper & Elder influenced ilvl 86 Bone helmet. Here we are looking for multiple different modifiers.

The +3 to level of socketed minion gems cannot be given enough props for how broken it is in this helmet, as such even going to a +2 will be a significant drop off in damage numbers, we don’t want to compromise on this. The latter 2 modifiers aren’t necessarily required to be tier 1, as the damage dropoff between a single level of a support gem is 1%, assuming tier 3 modifiers ( Level 16) on both the minion damage and hypothermia, we “lose” 8% total damage and some % increased minion damage. This is nothing compared to the (give or take) 40% we lose from having +2 as opposed to +3 to level of socketed gems. If you hit the 3 modifiers here but have low level influenced modifiers, you can continue with the next steps or start on another base.

This on average takes roughly 100 sets of fossils to hit for +3 to level of socketed minion gems with either tier of the influenced modifiers.

At this stage in the craft, we will have the +3 to level of socketed minion gems, the Hypothermia, and Minion Damage on a Bone Helmet, hopefully when you hit this base with a fossil spam, you landed on an open prefix. If you didn’t then we’ll have to gamble away the unnecessary prefix by using an

Orb of Annulment, if we brick the item by removing one of the needed mods we have to start using fossils again.

As much as I love making guides, it is very crucial in a game like Path of Exile that you play the game the way you enjoy playing it. This guide merely describes the most effective approach to craft the best items.
I hope you found the guide useful, and I wish you all many Tier 4 Seeds & Successful Divination Card gambles!