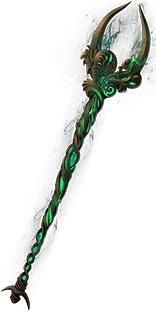 Soulwrest is the name of the build as well as the Unique item the build is designed around, which focuses on the

Summon Phantasm Support minions. Due to being focused around this specific Unique, it is limited to requiring this item for SSF players. With 3.19 Lake of Kalandra league minions got mega buffed with ailment damage such as poison, we will be taking advantage of these buffs and utilize poison damage for this build entirely as it skyrockets the efficiency. Despite being a brutal power-house in terms of insane damage output we will maintain super high defensive scaling in the form of mitigating damage through a variety of mechanics.

Below you can see the build in action from my YouTube Guide. Do note that the video might be outdated in terms of information, and you should always look at this guide to make sure you have the updated version.

In this section I will outline the pros, cons, & the general playstyle. This will allow you to determine if the build is for you or not!

+ Beefy – Despite being a minion build, it packs a very comfortable eHP # as well as mitigation, allowing it to function in Hardcore very well.

+ League Starter – The only true mandatory item for this build is, of course, the

Absolution until you are able to afford the staff to enable the build.

+ Bosser – Minion builds are in a current state of bliss where bosses simply just melt with the damage output available.

+ Unique Play Style – Unlike most summoner builds, this provides you with a new way of playing the game and in my opinion is more than welcome in order to avoid doing the same thing every league.

– Slight Ramp-Up Time – The build requires you to consistently re-summon your Phantasms; this is done by consuming corpses that you generate yourself, as you are then following up with casting your Offering skill to consume them for a buff.

– Poison Build The build will require you to cap poison chance to function properly. Details in Gear Section.

– Minion Build – Since your minions are doing the heavy lifting, defensive layers, such as leeching, are not possible in this build; this means you don’t want to be having any kissing sessions with packs of enemies or bosses.

– Damage Halts – In super low budget, you might encounter bosses with heavy AoE damage, and if the map modifiers are nasty there’s a risk that your entire army gets wiped, forcing you to re-summon your minions again. This is a rather rare situation since the Phantasms are ranged minions.

Since you are summoning your Phantasms by consuming corpses, the build forces you to keep track of how many minions you have out, and you should consistently during fights make sure you have corpses at-the-ready to be consumed by your Offering skill (either

Bone Offering) to buff yourself and your army as well as creating more Phantasm minions.

The duration of the minions very comfortably puts you in a situation where you don’t have to consistently spam new minions between packs, as you’re clearing maps. Since these minions are able to take agro from enemies, bosses can feel like a joke as the boss will target your minions as you’re summoning new ones.

Defensively, it has a good amount of Life, sitting at ~6,000 with heavy layers of mitigating mechanics which makes it work very well in Hardcore as well as in Softcore.

The PoB community fork created by Localidentity is the only version being kept up to date, so make sure you have the correct version: PoB Community Fork.

This low budget PoB covers LvLing trees, skill-sets for the campaign and finishes you with the end-game gear you’re expected to have whilst keeping the cost down hard: https://pobb.in/JHI69_q__Zcy

For both medium & high budget versions of this build you can check this PoB out, do note that it does not include LvLing trees or skill-sets expected to be used during the campaign: https://pobb.in/wb9JWhEmoaOV

You can find more information about this, as well as about all the gem links in the build, on our dedicated page.

You can read more details about our gearing recommendations on the dedicated page, but for now you can see a summarized version below.

You can read about the recommended Ascendancy, Bandit choice, and Pantheon Power recommendations for this build on our dedicated page.

Leveling this build with Herald of Purity alongside

Absolution from lvl 16 & 12 respectively is entirely doable, and while not the fastest it will feel great to see your build scale up without having to respec from a levelling steup.

Before You Enable Minions

Before you are able to utilize minions for your leveling experience you will need to get to level 12 as that’s when Absolution truly kicks of and excels your speed. Prior to that you’ll run the following:

Absolution skill and level with the ability all the way. Any links providing extra damage for the minions would be preferable early on:

In Act 3 Library you’re able to pick up

Physical to Lightning Support which enhances the damage significantly, auras doesn’t come in play till Act 3 either, at which point you’ll want to run

Zealotry depending on if you’ve taken the reduced mana reservation nodes or not. Mana will be sustained via a mana flask.

Besides our main source of damage you can utilize

Ruthless Support as well as

Vitality early on in the acts to keep yourself & your minions alive better.

For more general leveling advice, we recommend the following guides.

To guarantee that my guides are tools you can utilize to enhance your experience in Path of Exile, all you need to do is post your question in the comments and I will personally attend to them as soon as possible.

As much as I love making build guides, it is very crucial in a game like Path of Exile that you play the game the way you enjoy playing it. With that said, if you’ve made any tweaks to the build compared to what I’m showing in this guide I would love if you’d posted it in the comments! It’s an effective way to show other approaches and it helps me grow as a build guide creator!