Cruise through the acts into endgame quickly and easily with

Ice Trap! For most of PoE’s history traps have been known as a strong leaguestarter, not requiring expensive uniques or heavy crafting to kill bosses early, and this remains true today. Often overlooked despite the built-in defense layer of freeze/chill, our gear remains cheap. Just toss a couple salvos near a pack and move on, the traps have big AoE and hit hard. We also don’t overlook defense like some trappers out there.

✔️ Fantastic Leaguestarter: The acts and early mapping are essentially free with this build. When it’s time to upgrade, the next pieces are cheap as well.

❌ Defense: Although tankier than many trap builds, it doesn’t fully come together until you get

Determination running. This can be done earlier or later based on preference.

❌ Playstyle: Some people love it, some hate it. Traps are a different feeling from attacking or casting directly, it’s more like playing Brands.

Ice Trap has big AoE and can be thrown into the center of packs, making it great for mapping. Throw a few traps and move on, anything that doesn’t die will be chilled/frozen for you to quickly finish. For bosses you can stack traps between phases, or during the fight whenever you get a chance. You can have over 20 traps out at a time for single target damage.

Ice Trap is a cold-based spell, so we want to stack gem levels and %spell/%cold mods. Cast speed can be used later, when you get

Slavedriver's Hand. Since this is a crit build we love that as well, it can roll quite high on wand and shield. Our ascend has 2 points dedicated to damage, and finally we stack as much double damage chance as we can from

Defiance Banner. Capped spell suppression is easy to hit. Not only do we blind everything near us, we take 15% reduced damage from blinded enemies. There is also Ghost Dance with ~700ES, and we have enough armour to run

Leaguestart: Used for fresh leagues, or a start with near-zero currency. Its purpose is to get established farming early maps and buying gear for the next stage.

Midrange: We have dropped our leaguestart uniques for spell suppression rares, to make up for removing some on tree. 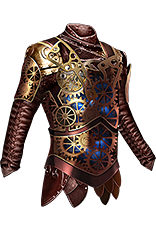 Tinkerskin with at least 5 links takes over the chest slot. We are stacking up reservation efficiency to fit in our next big aura, either

Hatred. This includes the beginnings of a cluster jewel setup, at least one medium and the reservation small.

Clarity and fit in our last big aura.

Chance to Poison Support and then with

Steelskin on my move button so it autocasts as a free defence layer. If the mana cost is too much stop leveling it or take it off entirely for awhile.

Arcane Surge Support at level 3 max, so it procs often.

You will need some STR on gear to run

Vitality, keep checking the vendor every time you level for an

Kill all the bandits.

I ran lightning trap until the end of act 3, but you can probably swap at the library if desired.

Lab was very easy to do right after Dominus and I took Perfect Crime.

Clarity to level 1 and added

Grace once I had most of the reservation mastery on tree, then levelled them back up as I gained more available mana.

This was the setup I ended the acts and started mapping with, from here I moved towards matching the Leaguestart PoB.