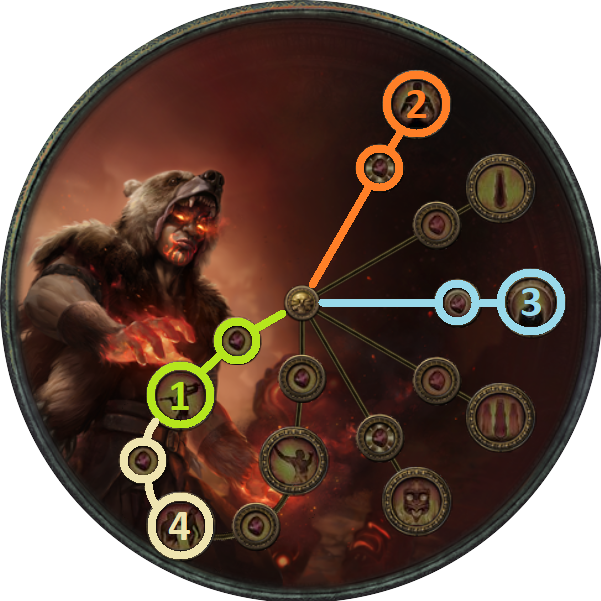 Ngamahu is an insane talent for this build, as it is what allows you to scale Elemental Damage instead of having to scale other types of damage. Together with Avatar of Fire it converts all of your damage to Fire which is a lot easier to scale than it would have been otherwise. Additionally, this Ascendancy point gives you a ludicrous amount of damage with 40% uptime.

This node is so much better than most people would give it credit for. Since you have 76% Fire Resistance, converting some of your Physical Damage in to Fire Damage is a great source of mitigation. This also means the Increased Life Recovery rate is always up as you pretty much always take some Physical Damage. Obviously getting 100% free Fire Resistance is big! Lastly, being unable to be Ignited is a lot stronger then you’d expect. All in all this node is a really strong defensive pickup.

Hinekora is there to provide you with another source of recovery. 1% of Fire Damage leeched will most likely sustain you throughout most of the incoming damage before even considering Regeneration of which you stack a stupid amount. On top of that, this Ascendancy covers your Enemies in Ash which increases their Fire Damage taken, which equates to almost 20% of your DPS.

There really only is one option here. You want to kill all and help Eramir for Skill Points. Sure, getting some Resistances and Mana Regeneration from Alira isn’t terrible as a league starter, but capping resistances really isn’t an issue on this build! Eramir just offers so much flexibility that it almost always is better than the others!

I would recommend Soul of Abberath as taking reduced Fire Damage while moving is fairly nice while mapping. This makes you take less damag from