This guide will teach you how to craft basic generic high pDPS weapons.

The finished item that you should have after following this guide heavily depends on which base weapon you decide to craft on, it can be a 2 or 1 handed weapon and both of which have a lot of different bases, this guide will go through the most generic baseline approach to crafting such items. To view the best bases for weapons check out this link.

You can check the full crafting process below, or skip straight to the TL;DR summary

The choice of base will differ depending on what type of weapon you’re looking to craft a note on this is that to increase the physical DPS on the weapon itself you can increase the quality of the weapon to have a better base to work with. This is done by using a 1 socket resonator (

Primitive Chaotic Resonator) combined with a

Perfect Fossil which rerolls the quality of the item between 1-30%, I usually stop between 28-30% depending on what my goals are.

The item level you’ll want to go for is a minimum of 83 which allows for the highest physical damage increasing modifiers to roll.

The process is extremely generic and straight forward.

Crafting a weapon to reach high physical damage can be done in multiple different ways ranging from fossil crafting, essence crafting all the way to harvest as well as alteration crafting. Most of which are more advanced going for very specific modifiers, this guide will outline the most basic approach to crafting a good pDPS weapon. This method is going to be utilizing

Regal Orb as well as bench-crafts.

To understand what modifiers impact the physical DPS you get from your weapon you must first understand what affects the end-result. The factors you’ll be looking at is actual damage as well as attack speed. To calculate the physical damage on a weapon you take the minimum damage dealt + maximum damage dealt, divided by 2 and then multiplied by the attack speed of the weapon.

So the process to craft the item is to first decide on a base weapon, decide if you’re willing to invest in to Perfect Fossils to make the quality higher than 20% and then use the Alteration Orbs as well as Augmentation Orbs till you hit 2 desirable modifiers, since all the physical damage increasing modifiers are prefixes this initial crafting process will only apply 1 prefix and 1 suffix modifier where the only attractive suffix modifier would be increased attack speed. Depending on your preference here you can neglect the suffix modifier entirely and simply craft till you hit 1 high tier physical damage increasing modifier and proceed to use a Regal Orb to hit that second physical increasing modifier. If you do hit a good tier of such a modifier you can then utilize the bench-craft to apply the third resulting in 3 physical damage modifiers as prefixes without the attack speed in most cases. This can then be fixed by using the Harvest craft “Reforge item whilst keeping prefixes” or “Augment speed” craft to achieve the last modifier. 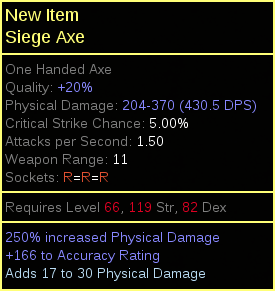 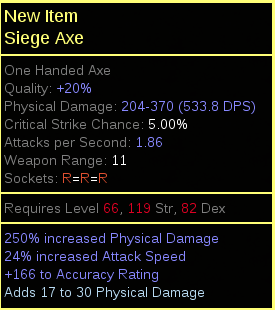 If you do not hit a good tier of a physical modifier on the Regal Orb you either end up with a “useless” prefix modifier or a second suffix modifier that you really don’t care about such as this: 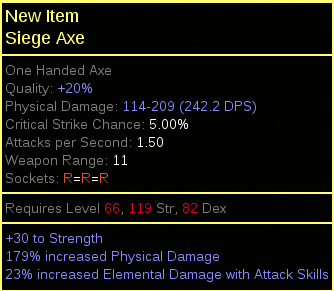 In situations like this you’ll be looking at the item if the modifier you don’t want lacks the tag “Physical” you’re able to use the Harvest craft “Remove non-physical, add a new physical modifier” which will remove 1 of the modifiers on the item that does not have a physical tag and simply add one which will give you the chance of hitting that increased physical damage modifier that you’re looking for. Only problem with this situation is that the suffix modifier is almost always going to be able to be hit by this craft so if you do have undesirable prefix that might still be on the item forcing you to use the “Remove non-physical, add a new physical mod” craft twice and simply have to close your eyes and pray.

A note about this type of crafting process is that there are multiple ways to approach the item(s) with things like Fracturing, Essences or further abusing Harvest crafts as well as imprinting the item. All of these methods are generally more expensive and the above stated crafting process is meant to help people grasp the idea of how to craft an okey pDPS weapon.

As much as I love making guides, it is very crucial in a game like Path of Exile that you play the game the way you enjoy playing it. This guide merely describes the most effective approach to craft the best items.
I hope you found the guide useful and I wish you all many