This guide will teach you how to craft the meta minion helmet.

The finished item that you should have after following this guide depends if you’re looking for a life based or energy shield focused approach which only changes 1 modifier on the helmet, everything else is the same.

You can check the full crafting process below, or skip straight to the TL;DR summary 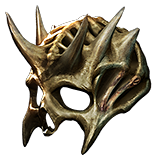 Bone Helmet for extra damage output or a

Hubris Circlet to further push energy shield for the higher budget versions of many minion builds.

The item level you’ll want to go for is a minimum of 86 which allows for the highest + level to socketed minion gems to roll.

This guide will start with showing how to craft the base-line meta minion helmet which is including +3 level of socketed gems, minion damage as well as hypothermia support modifiers.

To start of with you need to get 2 different helmets, 1 of which will be the item you want to craft on, that item has to be item level 86+ to make sure it can hit all the modifiers we want on it. That helmet also needs to be either Elder or Shaper influenced and the other helmets item level doesn’t matter but it has to have the other influence (Shaper or Elder). Since we are unable to harvest craft deterministically we will want to use

Awakener's Orb to combine these helmets by using it first on the helmet we don’t care about then applying it’s effects on the helmet we do want to work with. The orb will take 1 of any existing influenced modifiers on the item and transfer that modifier as well as the helmets influence to the other helmet and combine them at the same time as the orb keeps 1 of the existing influence modifiers on the target helmet. So if the only influenced modifier is the Hypothermia & the Minion Damage those 2 modifiers are guaranteed to be on the newly rolled double-influenced base-line helmet you’re about to craft on. This gives us a slim chance of hitting the non-influenced modifier “+3 level of socketed minion gems” which literally finishes the item in one go. More often than not this will not happen which brings you to the next step of crafting. 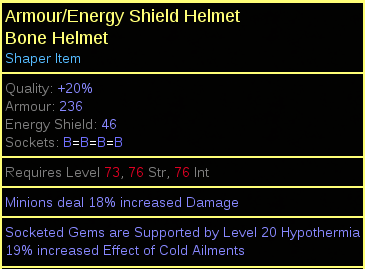 This is the target helmet craft base. 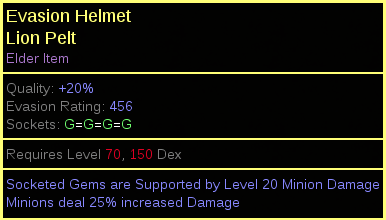 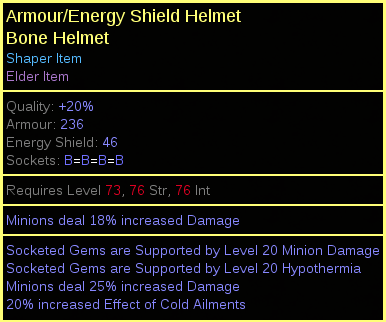 Since the helmet lacks the “+3 level of socketed minion gems” it is therefor not worth keeping and we will move on to the next crafting step. 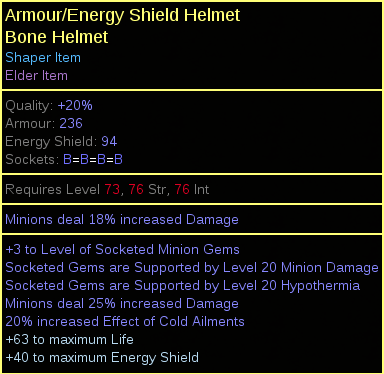 If you end up with a third prefix modifier blocking the possibilities of bench-crafting EITHER life or energy shield there isn’t much we can do without risking the helmet. This is still a very good result but lacks the extra eHP modifier.

Since we are most likely ending up with a double-influened (Shaper/Elder) helmet of item level 86+ without the “+3 level of socketed minion gems” we will almost always be forced to take the next step of this crafting process. At this point we are going to be using a 2 socket resonator (

Potent Chaotic Resonator) combined with a

Frigid Fossil, this gives us a rough estimate of hitting the +3 mod together with minion damage & hypothermia supports in 1 every ~69 tries (nice). As stated on above images if you do hit this there is a slim risk that the third prefix modifier slot is taken and we are left with no options in fine-tuning the helmet from there, however, if the prefix slot is open you can then proceed to bench-craft either Life or Energy Shield depending on your desired approach.

The advanced process will include the corrupted essence of horror modifier (+30% more elemental damage dealt by socketed gems) and is also vastly more expensive to craft compared to the base-line approach stated above. To include the essence modifier on the helmet we are now unable to have a slim chance of finishing the helmet with the Awakener’s Orb instead, we will just combine the influences and start the crafting process from there. You have 2 options, which is best, completely depends on the market prices of fossils vs the essences themselves.

If the combined cost of the 3 socketed resonators ( 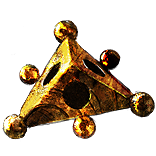 Powerful Chaotic Resonator) is cheaper than the price of

Essence of Horror you might want to take this route. The only problem with the fossil strategy is that to get the essence modifier we have to use a

Glyphic Fossil which gives you 1 out of the 4 different corrupted essence outcomes, since we do want to combine this craft with a

Frigid Fossil the Bound Fossil increases the weight of hitting the

Essence of Delirium modifier as it increases the weight of hitting Aura modifiers which is what the Delirium Essence mod has so instead of 1/4 chances of hitting the correct essence modifier with this process you have 1/14 tries to hit the desired essence modifier on top of the other modifiers needing to hit which is an average of 1 in ~169 tries (nice) which you’ll obviously have to multiply with 14 to get a proper average calculated outcome. Due to this nature I am almost always advocating for the essence spam process stated below.

This process is all about spamming 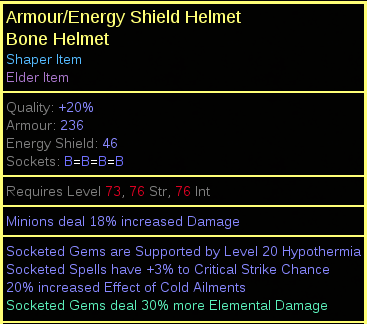 This example is a great one for the use of the Harvest craft “Reforge item whilst keeping suffixes” which should normally be done till you hit the “+3 level of socketed minion gems” and then you have to RNG close your eyes and pray with the Harvest craft “Augment an influenced item with a new influenced modifier” hoping to get the “socketed gems are supported by level # minion damage” modifier. 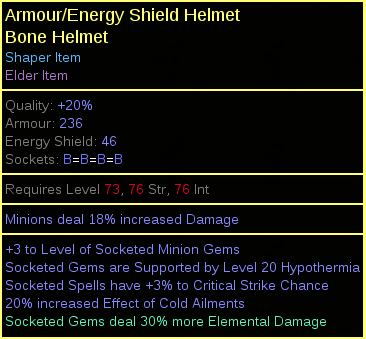 This result prompts the use of the Harvest craft “Augment an influenced item with a new influenced modifier” hoping to get the “socketed gems are supported by level # minion damage” modifier.

Exalted Orb to even consider doing. However, you always have the possibility of hitting this modifier during any of the above stated crafting processes if you are lucky!

As much as I love making guides, it is very crucial in a game like Path of Exile that you play the game the way you enjoy playing it. This guide merely describes the most effective approach to craft the best items.
I hope you found the guide useful and I wish you all many