Please check out this page of the guide for our updates for Scourge league. 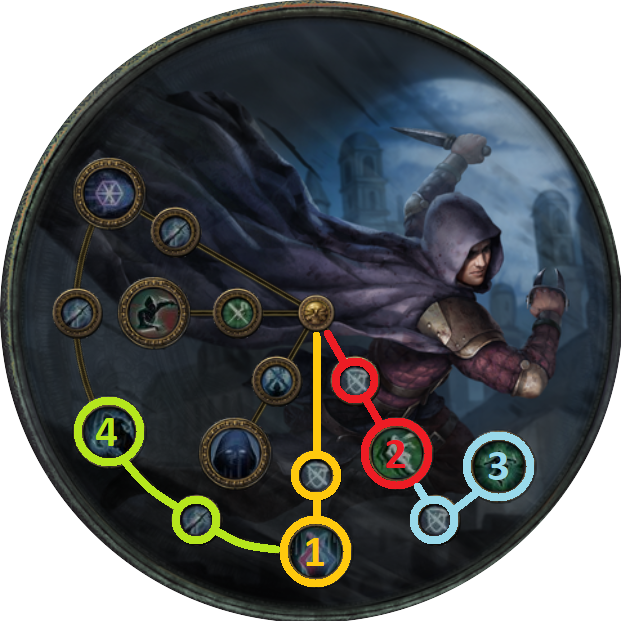 As your 3 first Labyrinths are generally really fast, I’d advise you to pick this up first. Patient Reaper offers you incredible sustain and, even though it has lost its increase in damage, it will still be incredibly helpful overall. The increased Recovery Rate will help a great deal as well in the late game while mapping!

This is what enables Ghost Dance as it makes you want Evasion on your Body Armour. Since it gives you 1 Energy Shield per 6 Evasion, a pure Evasion Chest piece rivals a decent pure Energy Shield chest, while a hybrid, such as recommend, enables you to rival a really solid ES Body Armour. This means you’re effectively getting all the Evasion on your Chest for free! Additionally, you’re getting free Evasion from your Helmet, as every point of Energy Shield there gives you Evasion. All together that means you’re getting a solid amount of Evasion for free, making it so the Ghost Shrouds recover significant chunks of Energy Shield. Additionally, it gets you really nice amount of free Cast speed which is not to be neglected either! Last but not least, it gives you stun immunity which definitely is something you really want when you’re playing a Chaos Innoculation build.

Lastly, in the Uber Labyrinth, Prolonged Pain offers you that last little chunk of damage which the build really needs. Given its already relatively low output, this extra Damage over Time is much welcomed! The Skill Effect Duration also makes so you don’t need to refresh your DoT too often giving you more uptime in fights where you have to dodge. Lastly, a little bit of mitigation versus Damage over Time isn’t bad as that is one of the things we are weakest against, given that can’t be blocked or dodged.

There really only is one option here. You want to kill all for Skill Points. Sure, getting some Resistances and Mana Regeneration from Alira isn’t terrible as a league starter but capping resistances really isn’t an issue on this build! Eramir just offers so much flexibility that it almost always is better than the others!