A Deadeye and a bow, does it really get more iconic when it comes to Path of Exile builds, I wonder? This duo has been on top of the ladder when it comes to clearing maps and doing damage for as long as Ascendancies have existed. Whereas it has undergone a couple of meta-shifts, nerfs, buffs, iterations and what not, it has never really completely ebbed away from the meta. Wielding a bow on a character that moves at the speed of light will always make a lot of people tick and this build is no different.

Now, I’d argue the most known archetype of Deadeye bow builds is a Magic Find oriented build that farms very low tier maps because it simply can’t handle much more than that. When talking about such builds, our ancient beloved

Tornado Shot comes to mind (may it rest in peace) but that obviously got nerfed so significantly hard that the Magic-Finders had to swap skills. So much for diversity one would say, because they also swapped to

Barrage, a deadly combo we will be showcasing in our build guide here, albeit it the endgame non Magic Find version.

This take on Deadeye brings us a very versatile character that can be altered in many ways, but effectively as showcased here does a little bit of everything. It has excellent clear through the combination of 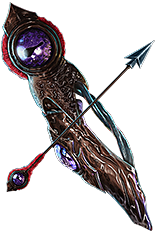 Voidfletcher to clear up stragglers and

Ice Shot‘s inherent mechanics making it a skill that deletes multiple screens of monsters instantaneously. While it is a struggle, the build also manages to reach a respectable amount of health and defenses to make it possible to kill all the endgame bosses on it. Do not be mistaken, that does not mean that Sirus AL8 is a joke with it, or that Uber Elder can be killed while you’re AFK. It requires you to play well, make use of your DPS uptime and dodge most telegraphed mechanics, but the numbers are there and they’re fairly impressive! There’s definitely more tanky builds out there but they don’t bring this type of ranged clearspeed.

Voidfletcher brings so much for this build is because of the Void Charges it grants and the Void Shots those unleash whenever you use a bow skill. They are a little bit delayed, so generally your

Ice Shot will do most of the heavy lifting while mapping, but whenever something is left alive the delayed Void Shot will kill it, for sure, which means you don’t have to slow down for it. The emphasis on them killing the stragglers with certainty is because they deal tremendous amounts of damage. It is relatively hard to estimate, but I assume that in this build in optimal conditions they can add anywhere between 5 and 7 million damage. This is because they overlap, so every projectile is a more multiplier, and we stack a lot of those with

Barrage. Additionally it has a really high damage effectiveness, which means we’re stacking as much Flat Damage as possible to greatly improve its damage.

For you to feel comfortable to kill all those aforementioned bosses (such as Sirus, Uber Elder…), this build requires a moderate amount of investing. However, it excels at generating the currency, as after a fairly low entry-cost it will blast through maps at the speed of light! When you’ve acquired all the pieces of the puzzle I’m presenting you today, the build reaches over 4,500 Health with close to cap Evasion and Spell Suppression. That means it can take a hit, and multiple even, while getting hit rarely in the first place. The returns you are getting for it on the other side of the PoE spectrum, though, are pretty impressive. While staying focused on Clear Speed, it packs around 6 Million Sirus DPS without the Void Shots, which should theoretically equate for about the same amount of damage which is quite the number for a Deadeye of this caliber.

+ It’s a ranged build with a lot of freezing, making it extra safe
+ Top tier Clear Speed, as you’d expect out of a bow character
+ Fairly cheap to get off the ground
+ Incredibly fun and satisfying to play

– Gets relatively expensive after your basic items
– Requires those decent investments to kill high end bosses
– While it’s fairly safe, I wouldn’t call it Hardcore viable

Elemental Reflect will kill you, no matter what. Otherwise the build should deal with most mods relatively well unless its a very nasty combination of offensive mods.

Ice Shot has always been up there in terms of clear speed but has always lacked the damage to compete. It recently got buffed fairly significantly, putting it up there with most other contenders for

Tornado Shot after its nerf. Right now, in combination with Deadeye and

Awakened Chain Support, it offers the best clear we have ever seen out of a bow skill as long as you are playing a damage-oriented build. Once Ice Shot starts lacking damage, it falls off a cliff rather rapidly, leaving stragglers around and whatnot.

Even though all of those buffs helped the skill tremendously, it also suffers because of the boss changes that happened a couple leagues back. Whereas builds that had a couple million DPS were usually calculating their damage in Shapers per second, they now struggle to kill white monsters in a Tier 16 map. Sadly, that means you’re not going to be able kill anything that has a sizeable chunk of health such as high tier map bosses while solely relying on

Ice Shot. There’s no shame in that, as most (read: all) bow builds nowadays are forced into either a

I personally don’t really appreciate builds that use multiple skills, but this one definitely makes up for that inconvenience by how pleasant and fast it plays and how capable it still is of killing bosses. Since you already are using two keys actively for main skills, I decided to keep the other skills as low-effort as possible with the only manual application you have worry about being the cast of a single

Sniper's Mark on a boss.

Through usage of Surpression, 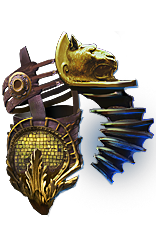 Withering Step, you get to Cap Evasion, Cap Suppression & 15% Damage Avoidance, meaning it is impossible for you to die to repeated small or medium-sized hits. However, your defensives versus one-shot mechanics are rather limited. Wind Dancer increases your maximum hit taken by about 20% when it matters, but that’s all there is. So, occasionally, you might randomly get popped by Deliriums, Metamorphs, certain boss attacks and so on. That’s why I personally wouldn’t take the build for a spin in any Hardcore environment.

If you are not comfortable with Path of Building, we also have a Tree from the PoE Website for you. Do note that this does not support Cluster Jewels and some specific unique jewels and it is highly recommended you install Path of Building to follow builds most optimally.

Rain of Arrows as

Ice Shot is just not a viable way of leveling a character. If you are looking for the most optimal way to level a character to maps, we refer you to the following guides.

Rain of Arrows build, you need to make your way to level 12 to be able to use the gem.

For starters, create a Ranger in whichever league you want to start.

Check if you can pick up a Quiver from the vendors before starting your journey. Two

Iron Rings can also help you a lot. Use the following links:

Added Lightning Damage Support to your Caustic Arrow for a couple of levels as you’ll need it when you make the swap.

From level 12, after killing Merveil, you’ll be setting up for your road to maps. It might be a little rough for some bosses, but you should eventually be fine with this setup.

Use the following on bosses: