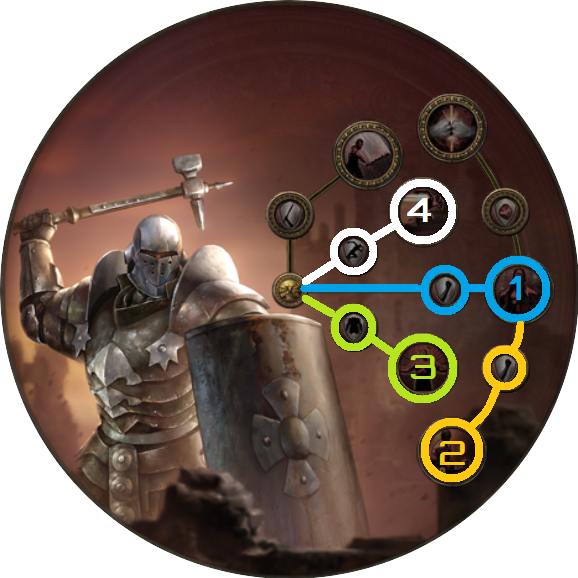 Unflinching is the first path in your road to the complete Ascendancy you’re picking up. It’s a solid base to start building up your tankiness from. Unflinching has a 30% chance to get you an Endurance Charge when you get hit. Additionally, when it grants you Endurance Charges, it has a chance to grant you the maximum amount instead of just 1. Giving us permanent Endurance Charges as well as an extra Endurance Charge is really nice and convenient to have while leveling up and cruising through the early Atlas.

Unrelenting further scales up the Unflinching notable we took as a first Ascendancy point through giving us benefits for having Endurance Charges. 8% Reduced Elemental Damage taken, some base Chaos Resistance when we get Endurance Charges, and some extra Physical Mitigation fits our character really well.

Unbreakable is an underestimated Ascendancy point by many. 5% Reduced Damage taken overall is insanely strong and shouldn’t be overlooked whatsoever! Additionally, 2% Life Regeneration is among the strongest sources of regeneration you can find and there’s even more here as you’ll regenerate a portion of the mitigated Physical Damage you’ve taken in the past 10 seconds. Since we are very strong at reducing incoming Physical Damage, this isn’t a small amount of added regeneration.

Choosing Unstoppable is a best of the rest type of thing. Since you made it to this point in the guide, it is imperative you understand how the “Action Speed/Movement Speed cannot be modified to below base Value” works. Regardless of the amount of added Action and/or Movement Speed you have, this Ascendancy node makes you immune to chill and freeze which means you have to now re-roll the flask you had with the Heat suffix as it is no longer necessary. We recommend you replace it with Grounding for Shock immunity. As a surplus, 10% Movement Speed is nice for

This build really doesn’t need anything from the Bandit options, so you should kill all. Oak is just too weak to warrant the two skill points and Alira and Kraityn really don’t do anything for us. Two skill points from Eramir it is!

No debate here, Soul of Arakali is your pick! Taking Reduced Damage over Time helps us mitigate the Poisons we inflict on ourselves. We’re also the most scared of Lightning Damage if anything, so having some avoidance there does help.

Again, no real choice here, Soul of Shakari should be picked but NOT UPGRADED. If you upgrade Soul of Shakari you can only inflict 5 Poisons on yourself which will hurt the usage you get out of

The Golden Rule. However, the base 5% reduced Chaos Damage taken does help us use Divine Flesh better and gives us a bit better mitigation again against the Poisons we do inflict on ourselves! Easy and straightforward pick!

Divine Vessel in the Map Device while you are activating the particular Map that contains the boss you need. Once you’ve killed the boss and captured his soul, you need to deliver the Divine Vessel, which will be filled up in the map device, to Sin in Oriath.