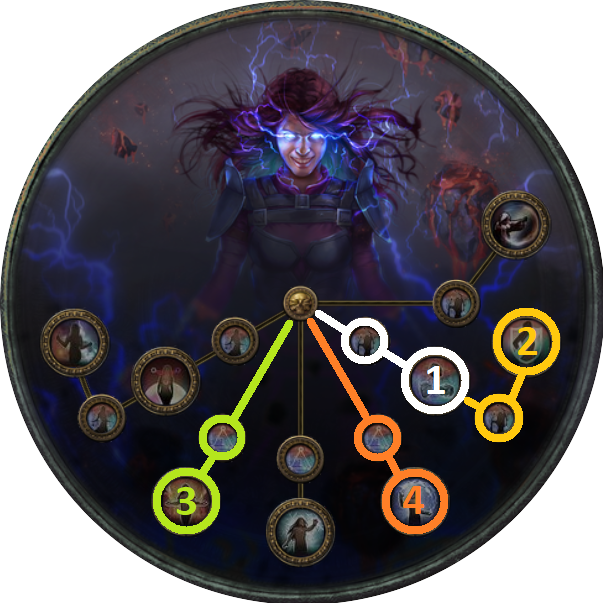 Liege of the Primordial

This is the first set of your Golem nodes. As you want to take both the Golem nodes and the Shaper of Flames before maps (or at early maps), you kind of want to take this one first as you’re not leveling as an Ignite build anyhow. Liege of the Primordial grants you 175% increased Damage and 175% increased Buff Effect from your Golems. Additionally it provides you with a way of keeping your Golems up as they’ll get re-summoned after dying. Lastly, this is one of your additional golem sources which allows you to eventually get to 7.

This notable makes your Golems immune to Elemental Damage which is important to keep them alive and grants you another additional maximum Golem. Additionally, this gives you 245% chance to Avoid Elemental Ailments effectively making you Ailment Immune and another 175% Buff Effect. These two sources of Buff Effect grant you about 17% DPS, 200 Life Regen and 10% Physical Damage Reduction. These two first Ascendancy nodes together are incredibly strong and potent if you invest into these Golems a bit.

Shaper of Flames is the enabler of this build. It allows all our damage to Ignite which creates a multitude of benefactors as mentioned beforehand on the main page.

Shaper of Storms is an enabler for a lot of builds as in it grants builds so much unconditional damage. However, Lightning Ignite builds excel at using this node as you are dealing mainly Lightning Damage to scale the 25% more ailment effect the node has as well as increasing the damage taken by your Ignite resulting in it being more than a 30% More Damage multiplier which is pretty insane!

There really only is one option here. You want to kill all for Skill Points. Sure, getting some Resistances and Mana Regeneration from Alira isn’t terrible as a league starter but capping resistances really isn’t an issue on this build! Eramir just offers so much flexibility that it almost always is better than the others!

Soul of Lunaris is probably your best pick. It offers you that last % of potential Physical Damage mitigation which effectively makes you a lot more tanky versus Physical Damage when it matters.