Please check out this section of the guide for Scourge league updates. 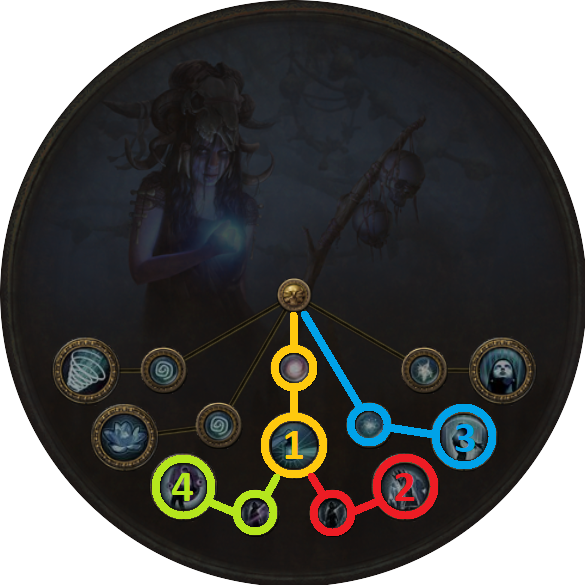 While mostly useful later on, Void Beacon definitely isn’t something to sniff at. Giving Enemies -20% Cold Resistance is a fairly significant damage boost (especially versus bosses) and making it so they can’t regenerate whatsoever also is a fairly powerful tool to increase your DoT’s effective DPS. More importantly, it enables you to get to the next node in Cruel Lab, which you will need to keep your damage up at that point!

This is the stronger early game option of the two you have at this point. Scaling some More Cold Damage is really nice and getting some extra Freezes while making enemies deal reduced damage with hits is extremely potent earlier on. While it eventually gets outscaled by Void Beacon, it definitely is a whole lot better in the early game!

Vile Bastion is a fairly strong Defensive part of the Occultist’s Ascendancy Tree. Since you have generally almost always killed at least a couple of monsters recently, you’re getting a decent chunk of % Regen here while also getting some flat regeneration unconditionally. While getting the Stun Immunity here is generally really nice, you already have obtained that through

Presence of Chayula so that doesn’t really do much for you in this case. We’re all about the Energy Shield Regeneration here!

With the lack of any better to take, Withering Presence’s 60% Chaos Resistance still is fairly nice! Since we’re focused on survivability in this build, we don’t mind grabbing some extra resistances versus one of the things that has the most potential to kill us! Where as some Occultists drop both this Ascendancy point as well as Vile Bastion to pick up an extra curse through Malediction, I think that the pressure that puts on gear for a relatively scarce output of Damage at a loss of Chaos Resistance and a ton of Regen is not worth it!

There really only is one option here. You want to kill all to help Eramir for 2 Skill Points. None of the Bandit options are particularly useful to you for this build.

I would recommend Soul of Abberath here as Burning Ground is incredibly annoying for Energy Shield based builds. It’s less annoying on this build cause of Wicked Ward, but it still stops your Energy Shield Recharge from starting all together so I feel like Abberath is a must for most Energy Shield builds.