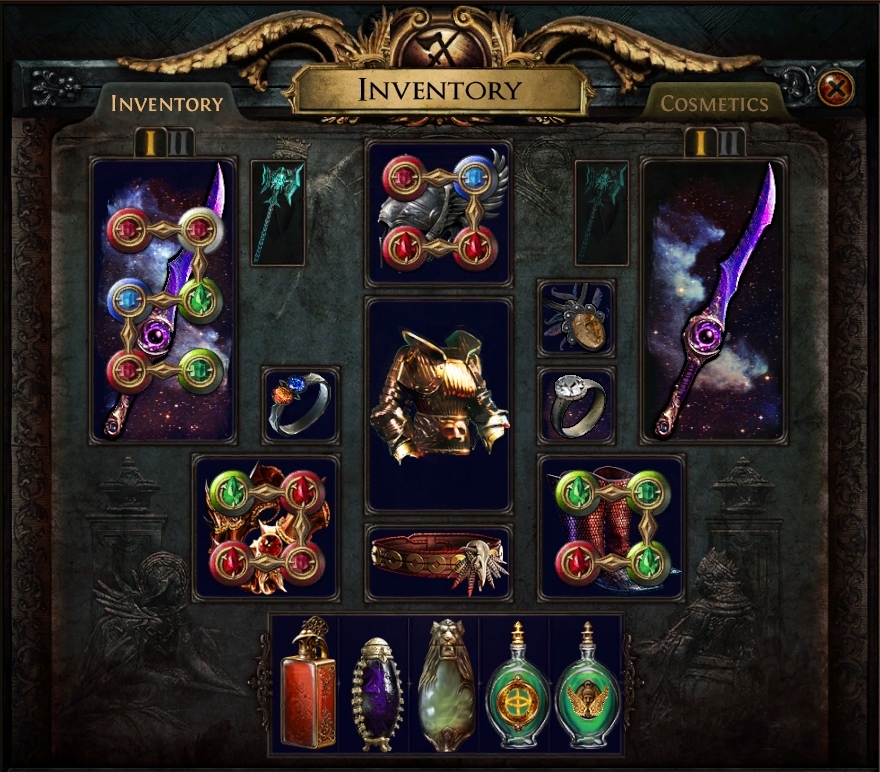 Having at least one item that helps you sustain Mana can be convenient, especially if you do not have

Enlighten Support at Level 3 or 4. If you are not using

Atziri's Acuity then this is easiest to obtain on your Rare Gloves, however, you can see the Rings section for alternatives. With

Enlighten Support at Level 4 you may find this is unnecessary altogether, however, you should try this for yourself before committing to any decisions.

Kaom's Heart is the natural choice for this build. We only use a single 6-Link, and with a 2-handed weapon there is little need for a chest with sockets. The big upside of

Kaom's Heart is the enormous effective life increase it provides, which gives us the confidence to slam straight into the most dangerous map mods and massive packs of monsters without any hesitation.

Belly of the Beast is a cheaper and highly effective alternative. One of the upsides of

Belly of the Beast is the option to run a second link, which could even bolster your boss damage early on. If you opt to go this route at first, we recommend linking another Vaal skill for damage, such as

Astral Plates are the most popular choice for cycloners lately and have some distinct advantages with the second 6-Link and various affix combinations. This build is a bit different to the grain but this option is very potent as well if you want to investigate it further.

Devoto's Devotion is the natural choice for virtually all

Cyclone builds out there. It simply has everything you need: Dexterity, Attack Speed, and most essential of all, Movement Speed. The reduced Physical Damage is not nearly enough to put a damper on how amazing this item is for

Cyclone builds. This is one of the most important pickups for the build, and should be one of your first targets.

Abyssus is actually disgustingly strong in certain situations, despite the increased Physical damage taken. For bosses in particular, such as Uber Elder or Shaper, this item will increase your damage by millions upon millions in the late game. While it is not a default recommendation, we mention it simply because it can take your damage to absolutely hilarious heights and allow you to do some really silly things on softcore.

Atziri's Acuity are the best choice overall, as they have Global Critical Strike Strike, a huge chunk of Armour, Intelligence, Life, and Vaal Pact. Basically, everything you could possibly want in a

Cyclone build. The Intelligence is a huge help, as it allows you to use blue gems like

Infused Channelling Support without the need to spec into additional Intelligence on the tree. They can be pricey, and are not essential to get the build working, but they feel oh-so-sweet when you get your “hands” on a pair. 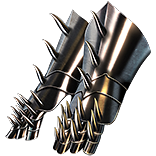 Spiked Gloves are perfectly adequate as well, and make filling out the Resistance cap a lot simpler. Prioritize your secondary stats as follows:

In most situations a Rare pair of 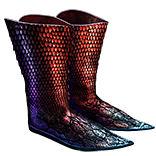 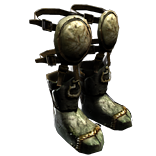 Titan Greaves is going to be your best option. This allows us to fill out Resistances the most easily and have solid across the board defenses. Some of the Elder affixes are quite nice to have, but are not required by any means.

Prioritize the affixes as follows:

Kaom's Roots can be used for Uber Elder if you are really struggling to dodge mechanics.

Since this build relies heavily on Critical Strike, Swords are preferred over Axes due to their implicits, despite lower base damage. Unfortunately

Starforge was heavily nerfed in 3.11, which hurts our end game but opens up our options.

In the late game, a Rare 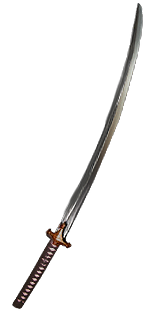 Exquisite Blade will surpass either option. Only one Attack Speed suffix should be taken. Prioritize stats as follows:

There are many other reasonable and powerful combinations; feel free to ask for advice in the comments as needed. Be sure to compare in Path of Building before making major investments.

Daresso's Salute is a great amulet for

Cyclone and is obtainable for relatively cheap prices. The movement speed is delicious and a great boost to clear speed, as is the area of effect and damage on full life. This should be a relatively early pickup as it is so strong.

A Rare Amulet, preferably an

Turquoise Amulet to help with attribute limitations, is the best choice for flat out damage. Prioritize stats as follows:

Rare Rings are best for this build.

Steel Rings offer the best damage as you might expect, but Resistance rings are helpful for capping your Elemental Resistances, particularly once you are using

Stygian Vise socketed with a

Headhunter is exceptional for this builds clearing ability and can be a whole lot of fun. It is not recommended unless all your major slots are fully upgraded, but if you want to go wild and at crazy speeds it can be effectively used by this build.

Viridian Jewel primarily) over Abyss Jewels, as they are simply better in every respect. Prioritize stats as follows:

Resistances, or any other helpful damage mods, are perfectly fine to work in as well!

This build uses a lot of the main trees notables, particularly those with Impale and Critical Strike/Multipler, to great effect. To this end, we don’t really need to use more than one Cluster Jewel, and even that is optional and a facilitator to slot in more regular Jewels. Our preference is to use a single Large Cluster with 2 Jewel Sockets and Devastator, Feed the Fury, and Smite the Weak. The Jewel Sockets should be filled with regular Jewels.

Watcher's Eye is the literal “crown Jewel” and one of the last and most luxurious upgrades any build can make. Unfortunately, they can be extraordinarily expensive and an entirely unrealistic acquisition for the majority of players. For that reason, we left

Watcher's Eye out of all our DPS calculations, but if you have deep moneybags, you could push the build to new limits.

Pride mods are all pretty amazing, but you would prioritize them as follows:

Be aware that these mods can shift in value depending on your level of gear; the double damage mod, for example, has significantly lower value in low levels of gear and Attack Speed. Check in Path of Building before making any significant purchases.

This is our recommended Flask setup. Feel free to swap out Flasks or Prefixes/Suffixes to suit your preferred style of play, as there are no real “mandatory” flasks for this build.

If you can get your hands on a

Cinderswallow Urn with a Critical Strike veiled mod, you can drop the

Diamond Flask in favor of a