It’s called the “Blood Crucible?” And you want me to put it where? Path of Exile’s latest Challenge League, Scourge, releases on October 22, 2021, and features many significant reworks and improvements alongside the regularly scheduled bevy of new uniques, skill gems and more, all packed up nicely in a delightful apocalyptic reality for you to farm to your battered, heart’s content. Kill demons, obtain loot, upgrade items, kill demons—let’s get started.

Getting to Know Your Blood Crucible

As expected, Scourge features a new mechanic: the Blood Crucible. The Blood Crucible is a device that has been implanted into your body and, appropriately, thirsts for the blood of your enemies. As you kill enemies, the Crucible fills. Once a required amount of blood has been collected, the device can be activated to shift into an alternate Wraeclast, the Nightmare, which has been overrun by powerful demons known collectively as the Scourge.

On the surface, it appears this would incentivize filling the Crucible as much as possible in order to maximize the amount of time you’ll be able to explore and fight in the Nightmare. However, the longer you (or your party) stay within the Nightmare, the more damage you will take. It has not yet been explained if this penalty will be inflicted on the player via a stacking debuff or if the Scourge mobs within the Nightmare will grow stronger and eventually overpower the player, dealing more damage than can be handled.

Additionally, the Blood Crucible itself will gain experience from defeating the Scourge and features a skill tree offering valuable account-wide passive unlocks.

Patch 3.16 introduces new Scourged modifiers which can be affixed to items and maps which have been inserted into the Blood Crucible. You can insert and level only one item or map at a time. An individual item can be transformed up to three times and maps can be leveled up to ten tiers. Each tier requires a set amount of Corruption (experience, essentially) earned from killing mobs within the Nightmare.

Items within the Blood Crucible will absorb Corruption from Scourge defeated while in the Nightmare, which is represented by a bar visible on the items’ tooltip. When an item’s corruption bar has filled, it is ready to be transformed. Transforming an item increases the item’s Scourged tier and adds two Scourged modifiers to the item, one beneficial and one detrimental. These modifiers are affixed to Scourged items in addition to any already present implicit or explicit modifiers an item may have. Compounding a Scourge modifier on an item will Corrupt the item.

An item placed in the Blood Crucible item can be Scourged the item up to three times, represented by tiers, replacing the two initially affixed modifiers each time. Therefore, a Scourged item will only ever feature two Scourged modifiers. Each Scourge tier offers increased minimum effects, so higher tier items will always roll stronger modifiers, though they might not be the same affixes from the previous tier. Items can be Scourged up to Tier 3, which is estimated to take approximately 10-20 maps per item. 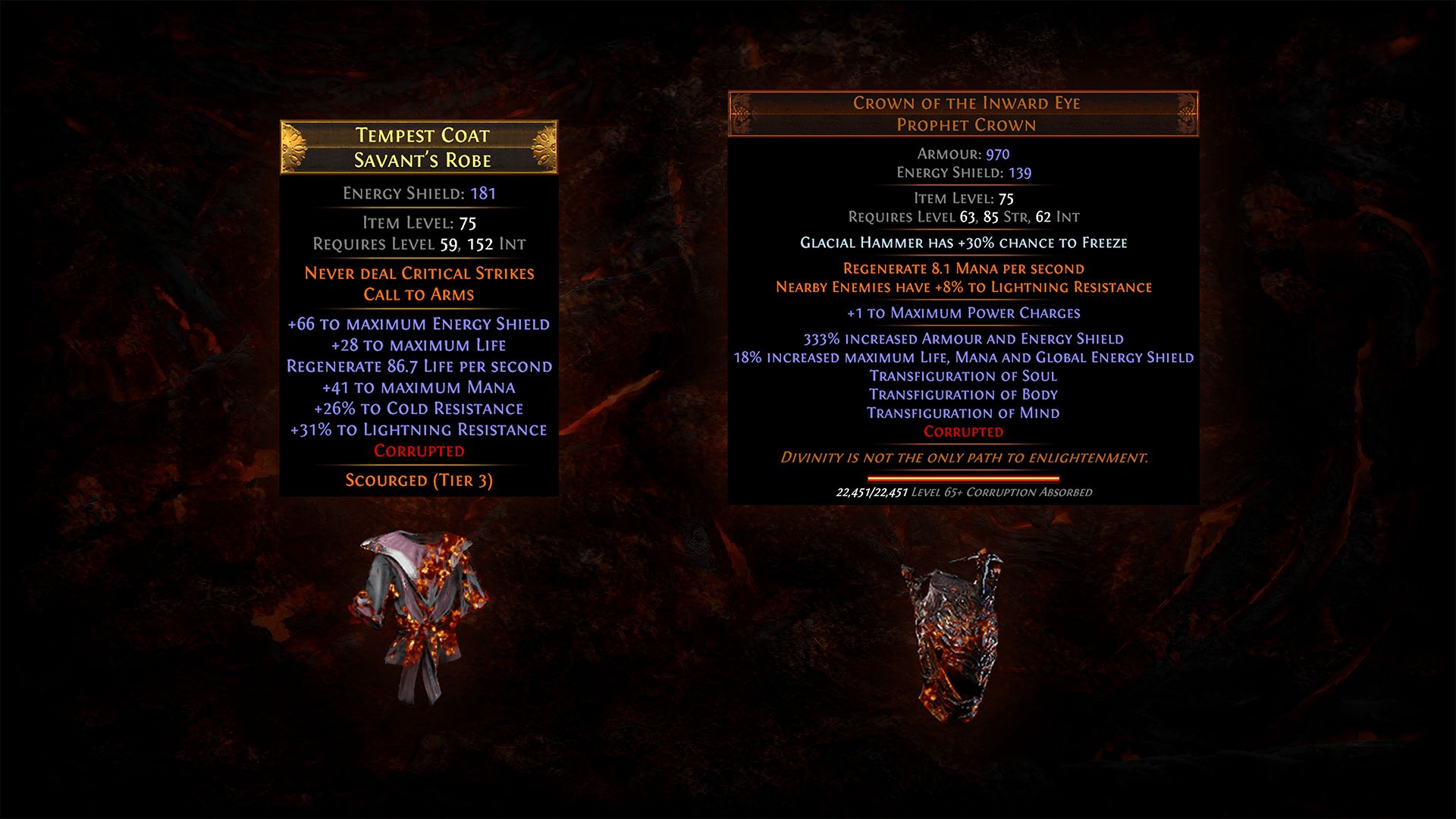 Once you have discovered the Dream Furnace device, presumably encountered while running maps, you will unlock the ability to place maps within the Blood Crucible. Maps have their own assortment of Scourged modifiers and can be Scourged up to ten times, increasing the benefits of its positive effects while also increasing the detriment of its deadlier modifiers. Unlike items, maps have a chance to also gain a new modifier each time it is transformed. It has not yet been determined how much time spent gaining Corruption in the Nightmare it will take to max out a map.

The new challenge league includes a set of 40 new challenges. As usual, there are microtransaction rewards unlocked by the completion of 12, 24, and 36 challenges. New Scourge Totem Pole decorations can be earned at the higher end of challenge completions, starting at the 19th challenge.

We’ve put together a list of recommended Patch 3.16 builds for players both new and old. Here you’ll find a small taste of what the build has in store for you! Click on a guide’s name to check out the full deal on PoE Vault, including skill tree builds, Path of Building exports, gearing recommendations and more.

Dominating the Atlas in 3.16

In an effort to streamline endgame character progression, the Atlas has been restructured and now features only four regions: Haewark Hamlet, Valdo’s Rest, Glennach Cairns, and Lira Arthain.

Additionally, as a result of these changes, items such as Base Types and Crafting Recipes previously obtained from now-removed maps have had their drop regions changed. These changes also affect drop locations of Divination Cards. Popular maps such as Bazaar, Burial Chambers, Precinct, and Shrine are especially notable exclusions, as they were previously the top farming spots for powerful Divination Cards. Many of these cards have found new homes among the remaining maps within the Atlas.

The entire Passive Skill Tree has been reworked, with many areas of the tree receiving much-needed love (like the inclusion of additional life nodes near the Ranger start) along with six new Keystone Passives. The biggest change in this rework is the introduction of Passive Masteries, a new mechanic on the skill tree that lets players allocate a passive point to select a powerful effect after allocating the Notable in a passive skill cluster on the tree. This includes effects that were not previously available on the passive tree, such as the “Corrupted Blood cannot be inflicted upon you” mod from the Resistance and Ailment Protection Mastery or the “8% chance to gain a Frenzy Charge when you hit a Unique enemy” mod from Sword Mastery. 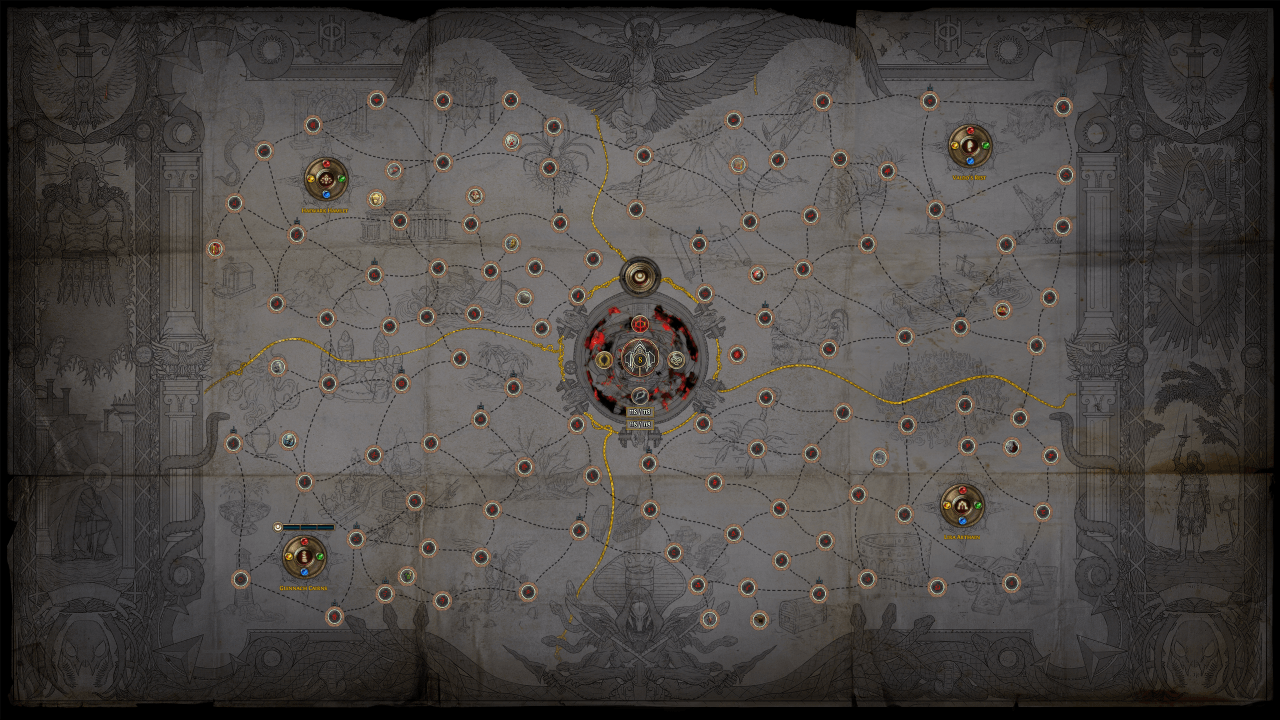 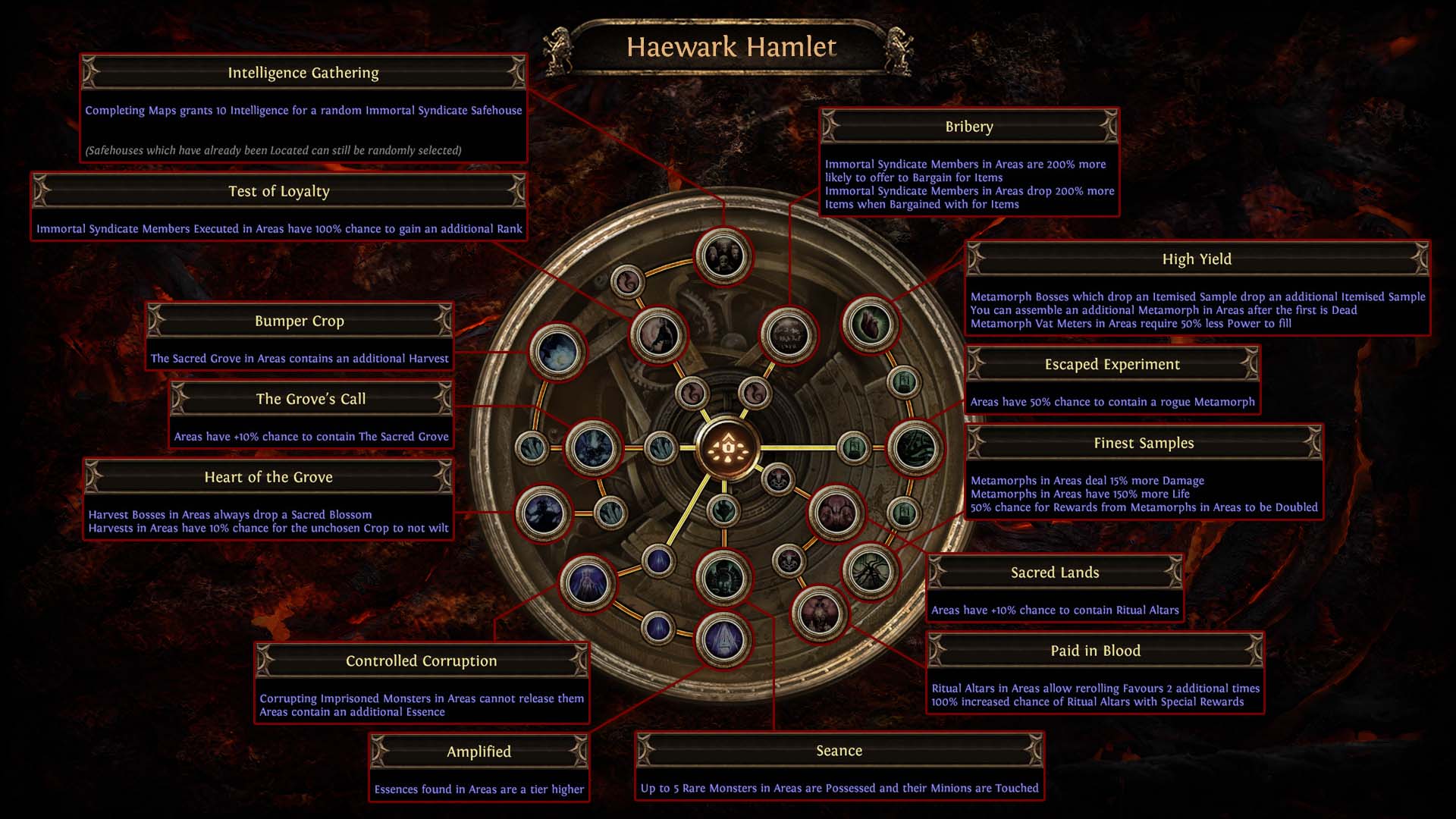 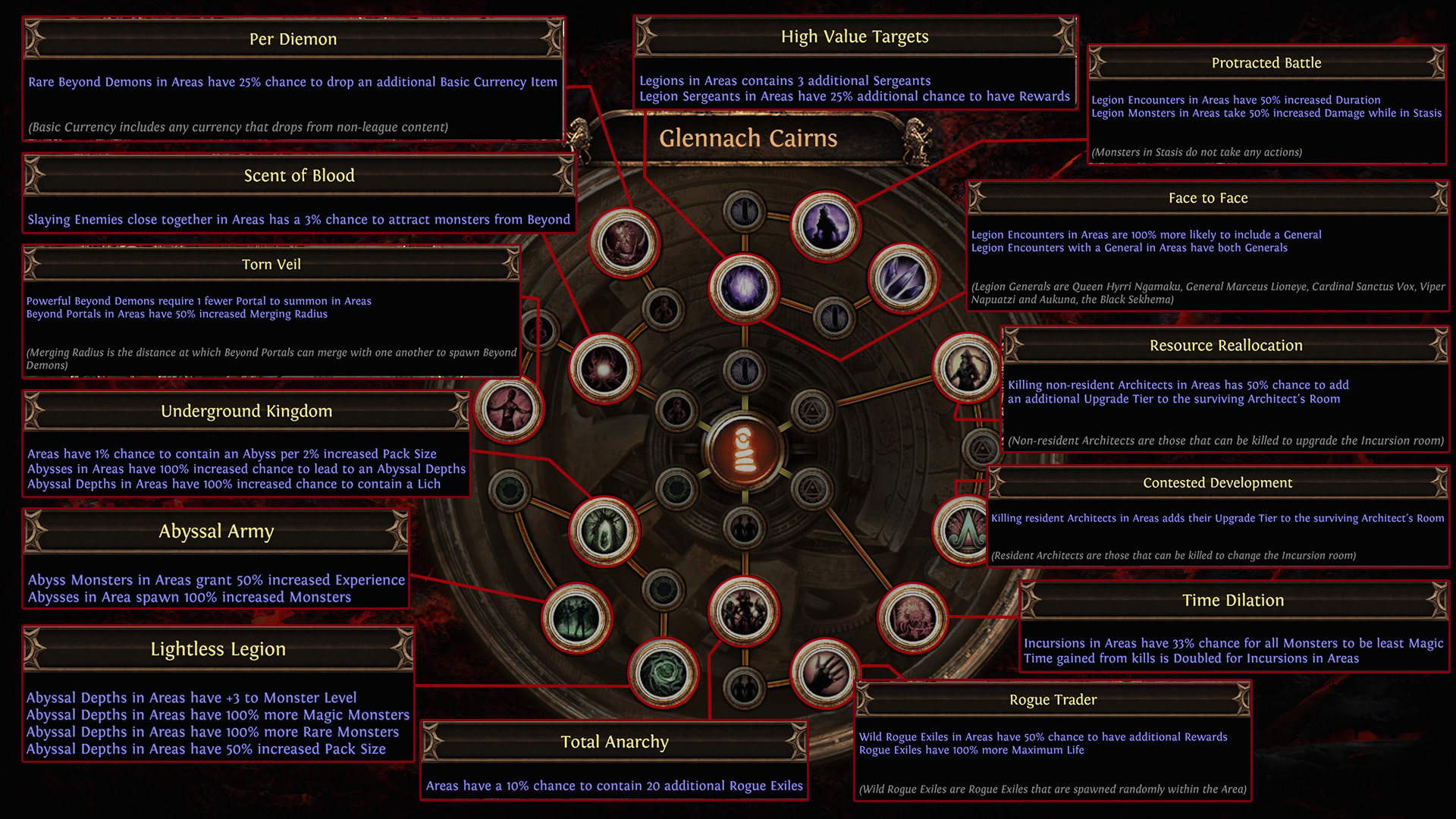 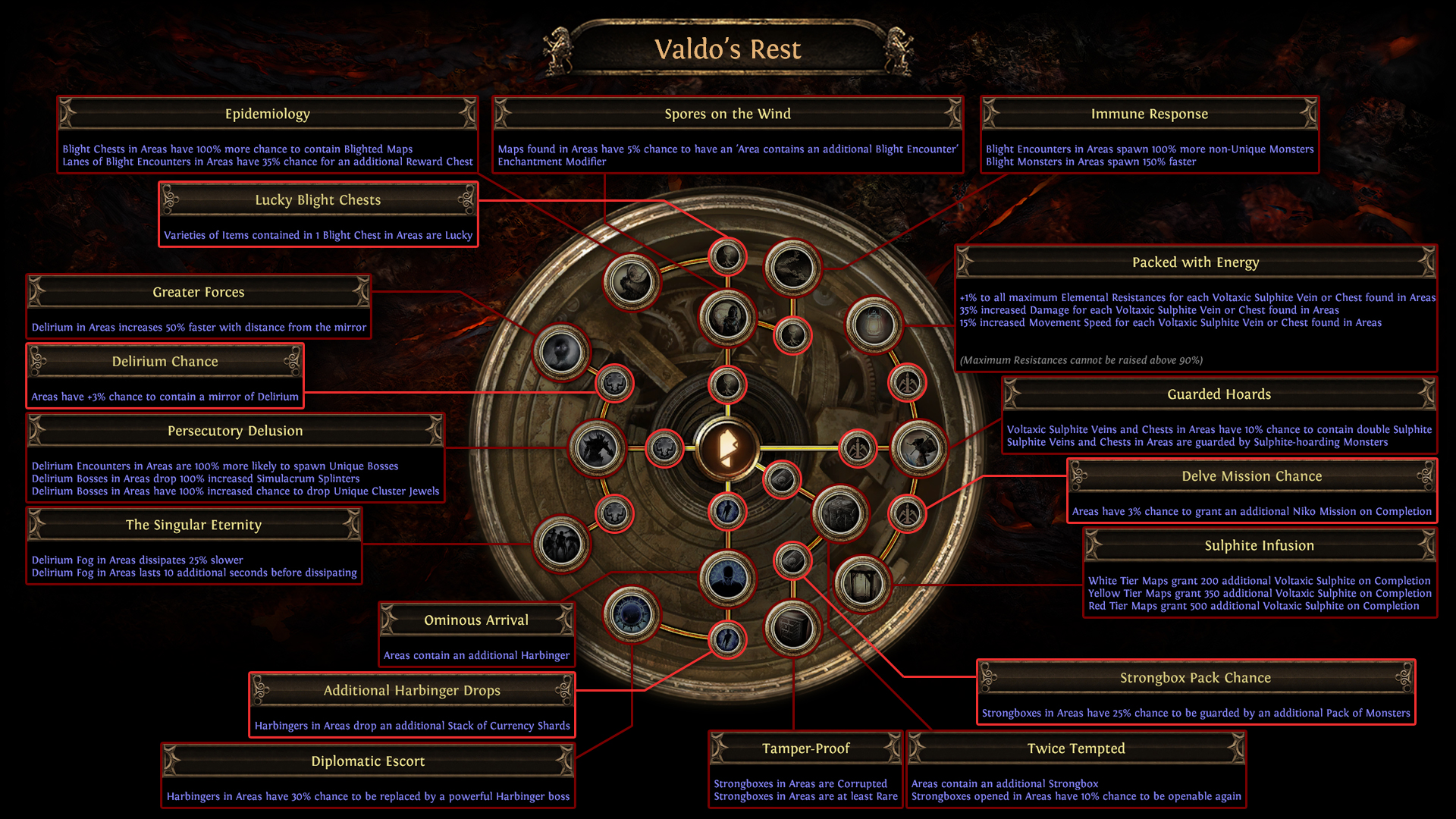 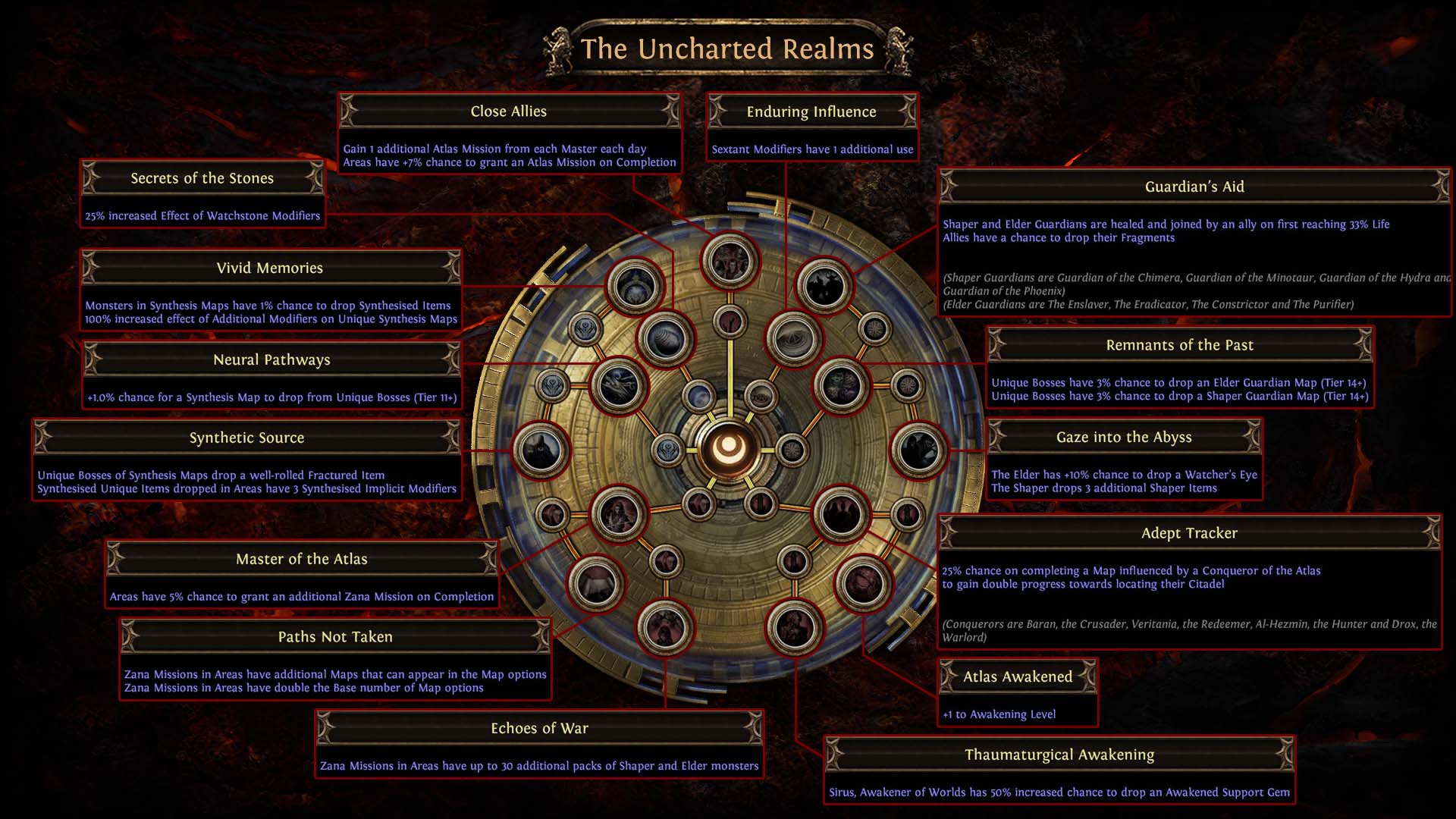 The flask and ailment changes address many major issues introduced in the flask rework in Expedition league, improving and optimizing the modifiers and effects of flasks.

The changes to defenses seek to smooth out differences in defensive archetypes by removing mechanics that provided too much easy mitigation, like Dodge, and strengthening base defense mechanics like Evasion and Armor to compensate.

The optimal way to play Path of Exile has long centered around powerful support characters providing auras and curses to boost damage and defense for a “glass cannon” carry. In this patch, GGG reduced some of their power by changing the way mana reservation mods work and by nerfing easily stackable sources of Curse and Aura effects. In exchange, supports received improved utility via the new Link class of skill gems, which let them confer a powerful effect to the linked ally.

Expedition is in, Perandus is out

With Patch 3.16, Players will finally say goodbye to Patch 2.2’s Perandus League, which has been removed from the Core game. In its place, you’ll now be able to experience Patch 3.15’s Expedition League and its content in the Core game experience. Changes have been made to Expedition Artifacts, which are no longer tradeable, and Perandus rewards have been upgraded to their Expedition equivalents when applicable.

Many minor but welcome quality of life changes have also been introduced with this patch, including improvements to Guild and player Hideouts and Stashes. You’ll probably be happy to know that Fragments, Scarabs, and Incubators can now stack.

The following new items have been added in Path of Exile: Scourge:


You can find the full Path of Exile: Scourge 3.16 Patch Notes on the PoE Official Forums. Be sure to keep an eye on the PoE Vault homepage for the latest news and guide updates as we shift into Path of Exile’s Scourge League on Oct 22nd!

On the Internet, nobody knows you're a dog.